Almost at the end of the year, it might be useful to make an initial assessment of the 2018 performance of the car market in the EU, looking at ACEA data on registrations.
After continuous growth in the period 2013-2017, in the aftermath of the economic crisis, in 2018 data suggest the possibility of a slowdown for car sales in the EU, as you can see in the following graph. 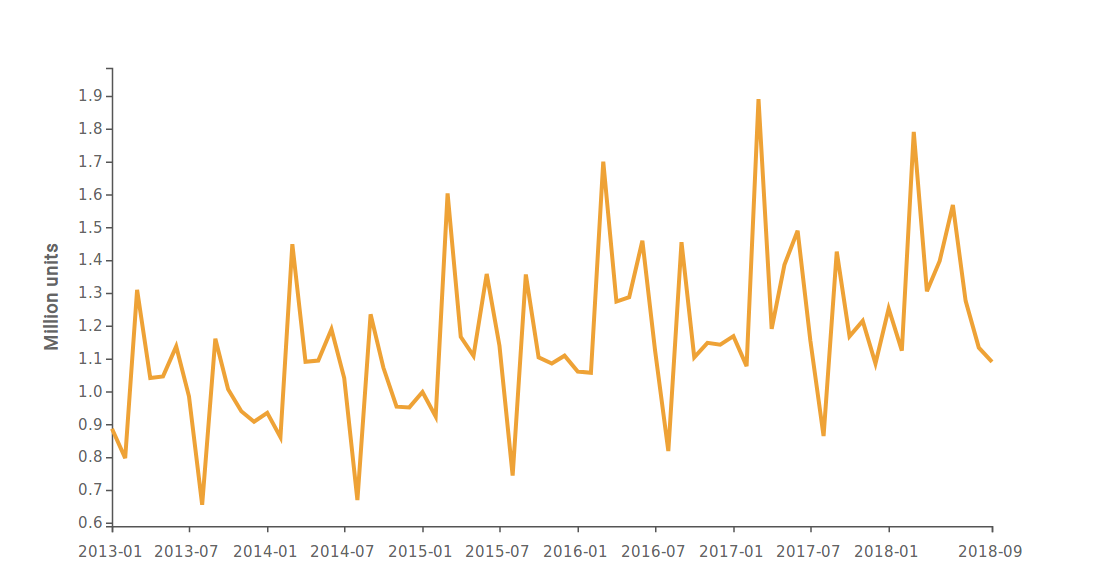 The time series shows that car sales are strongly cyclical, with increases in the first part of the year and decreases in the following months.
However, the peak recorded at the beginning of 2018 is lower than the one observed in the previous year, and it interrupts the long-term growth trend shown in the last 5 years. There could therefore be signs of a slowdown on the demand side.

The figure released in Septmber has been quite alarming: the European Automobile Manufacturers Association (ACEA) has announced that cars registrations in the European Union recorded a 23.5% decrease in September 2018 year-on-year. The situation appears less dramatic if you look at the cumulative registrations in the first 9 months of 2018, which show a modest 2.5% growth compared to the same period of 2017.

In a general context of slight increase in car registrations from January to September 2018, the only cases of countertrend were the United Kingdom (-7.5%), Ireland (-4.2%) and Italy (-2.8%). The biggest signs of growth came from Romania, Lithuania and Hungary, with increases in cumulative cars sales which exceeded 25%.

According to industry experts, the anomaly seen in September could be partly attributed to the introduction, at the beginning of the month, of the mandatory WLTP test (Worldwide Harmonized Light Vehicles Test Procedure) for European Union's car manufacturers.
This is a new control system for consumption and emissions, stricter than the one previously in force: not only new cars, but also those already approved with the previous system, but not yet sold, must undergo the test.
The increase in registrations in July and August 2018 compared to 2017 (+10.5% and +31.2%) could therefore be attributed to discounts and promotions aimed at encouraging the sale, by September 1st, of cars that couldn't have passed the new test. Given the increase in sales during the summer months, the presence of a slowdown in the following month is not surprising.

Looking at the European car market from another perspective, we can integrate the analysis of registration with information about the import flows. European car imports showed a 2.6% increase for Q3-2018 compared to the same period last year. The result, while remaining positive overall, represents the lowest rate of change (year-on-year)recorded in the last 5 years.

In a context of a slight slowdown in international trade growth, a similar slowdown has emerged in European cars demand, as reported by foreign trade data and registrations. Can this be read as a consequence a change in expectations about the global economic cycle?
A historical analysis of European foreign trade flows makes it possible to argue that the slowdown in EU vehicle demand actually reflects specific factors in the car market. The indices of European imports by type of car, shown in the graph below, allow to describe the transformations of the market in recent years.

Note: the groups of cars for which the displacement is indicated but not the power supply are petrol/diesel cars.

The graph shows that the most dynamic changes were recorded for electric motor vehicles, close to doubling the value recorded in 2015, and for cars with a displacement of less than 1500 cm3. Furthermore, imports of cars with displacements between 1500 and 3000 cm3 and above 3000 cm3 maintain a positive trend, but slowing down compared to historical data. This evidence responds to the consumer need for greater efficiency in fuel consumption and, at the same time, to the more stringent environmental regulations on emissions.
In contrast, imports of diesel cars show signs of contraction compared to the values ​​of 2015, following the Dielselgate scandal and the gradual banning of cars of this type.

In conclusion, the analysis of long-term trends in the automotive sector shows that the slowdown in European demand doesn't seem to be due to the lower growth of world economy, but to the evolution of consumption habits of final buyers. The uncertainty deriving from the "protectionist winds" does not seem to have influenced consumer spending decisions. However, greater uncertainty can be seen in the purchase decisions of companies, as evidenced by the slowdown in purchases of machinery and equipment.

Having almost halved the pace of growth recorded in Q1 of the year (after the slowdown in Q4-2021), some sectors already show cumulative negative trend changes [ Read all ]