The rebound of emerging markets currencies: the case of Indian Rupee

Another emerging currency that has experienced a period of weakening in recent months and is now catching up is Indian Rupee.
The depreciation of the Rupee began in spring 2018, coinciding with US rates hikes, and underwent a particular acceleration between mid-August and early October, reaching the maximum of 74.41 Rupees per dollar. Since then, a clear rebound has begun, which led the currency to regain more than 6% of its value against the dollar. 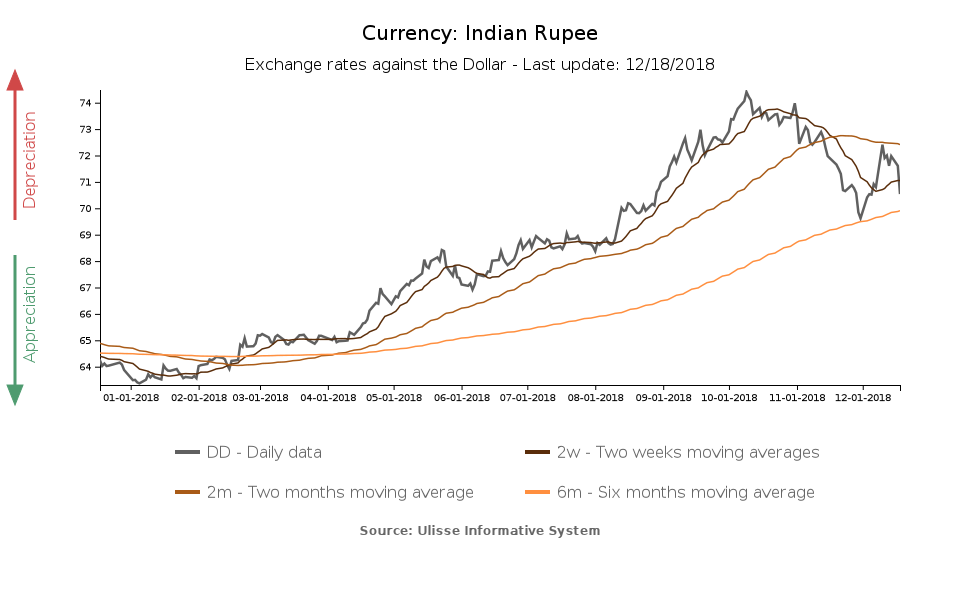 Behind this rebound, several factors can be identified: primarly oil price, since India is oil's third largest importer worldwide.
Oil transactions in dollars significantly support Indian acquisition of US currency; this, in turn, generates a weakening of the Rupee against the dollar. A drop in oil price, and the consequent decrease in the amount of dollars purchased by India, can therefore strengthen the Rupee.

This is what happened since the beginning of October, when oil price started a downward trend, basically because of an excess of supply. As you can see from the following graph, the Rupee began to strengthen just after the drop in the price of crude oil. 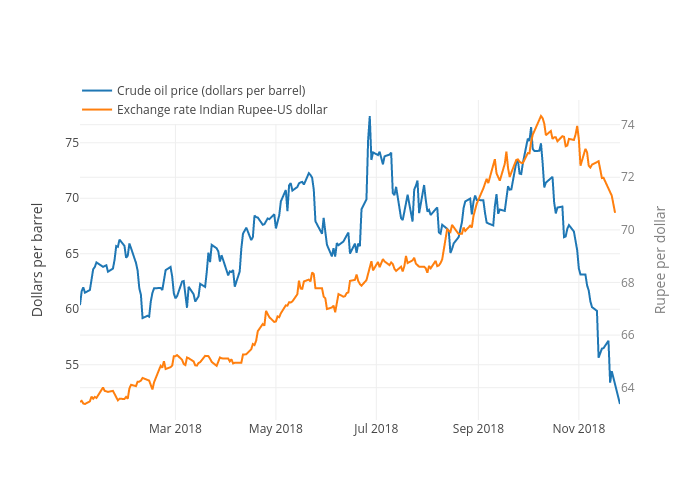 The intersection of the two time series shows how the price of oil isn't the only factor influencing the dynamics of the Rupee, given the modest coincidence between the curves. However, the presence of a partial leading role seems quite evident.

Another factor that has contributed to the strengthening of the currency is the sale of foreign exchange reserves by Reserve Bank of India (RBI).
SIUlisse data show that, between August and September, Indian international reserves have remained constant around 380 billion dollars. The latest information released by RBI suggests that, in mid-November, reserves were below 370, indicating the sale of foreign currency to support the Rupee.

Two main factors lead to doubt about the possibility of a sustained strengthening of the Indian currency in the near future. The first is a political one: the upcoming Indian elections, which will take place in May 2019. The Rupee will probably feel the effects of uncertainty.
Another element to take into account is trade balance. India has a large current account deficit which, according to the RBI, has not shown any signs of improvement: on the contrary, in the period July-August 2018 the trade deficit increased by 35.3 billion dollars compared to a year ago. In this context, the natural response of the currency is weakening.