The commercial truce between the US and China

The objectives and possible scenarios for the agreement signed in Buenos Aires.

During the G20 summit in Buenos Aires, US President Trump and Chinese President Xi Jinping reached a commercial truce agreement.
Although the details of the agreement are not clear yet, according to the US administration's statement, the agreement concerns three main points:

The agreement signed in Buenos Aires therefore represents a momentary suspension of a protectionist escalation and not a suspension of the commercial war in place between the two superpowers, which currently affects, in America, about 200 billion Chinese imports with a tariff of 10% and remaining 50 billion with a tariff of 25%; in China it hits about 60 billion US imports with tariffs between 5% and 10% and an additional 50 billion with rates of 25%.
Furthermore, in case of non-agreement within 90 days of negotiations, Trump would follow the threats of further tariff increases.

However, several points of the truce signed by the two countries remain unclear, given the information available so far, the main goals of the preliminary agreement signed by Presidents Trump and Xi Jinping seem to be the trade deficit decrease between the United States and China, and the protection of intellectual property and technology transfer.
The codification process for intellectual property rights and technology transfer is a relevant and modern theme, which worry the United States and Europe itself. On the issue, Europe, Canada, Japan and other countries (see the link) have agreed to initiate a process of reforming the WTO rules.
If the US reconsider the idea of ​​bringing the dispute with China back to WTO, the possibility of tackling the discipline of intellectual property protection in a collegial manner could give concrete results.
On the contrary, it is much more complicated to predict what will be the instrument chosen by the US administration to reduce its trade deficit towards China, an objective that the Trump administration has always considered primary.

Unlike the concerns about the undue transfer of intellectual property, concerns about the trade deficit towards China have a strictly political matrix. Furthermore, it is not the first time that the United States are worried about a significant trade deficit in bilateral trade relations. For example, in 1984 the US-Japan vis-à-vis trade deficit accounted for about a third of the total American trade deficit.
After the China's entry into the WTO, the U.S imports from China has shown a relevant growth, increasing the U.S. goods trade deficit with China.

Level of exports to the partner country 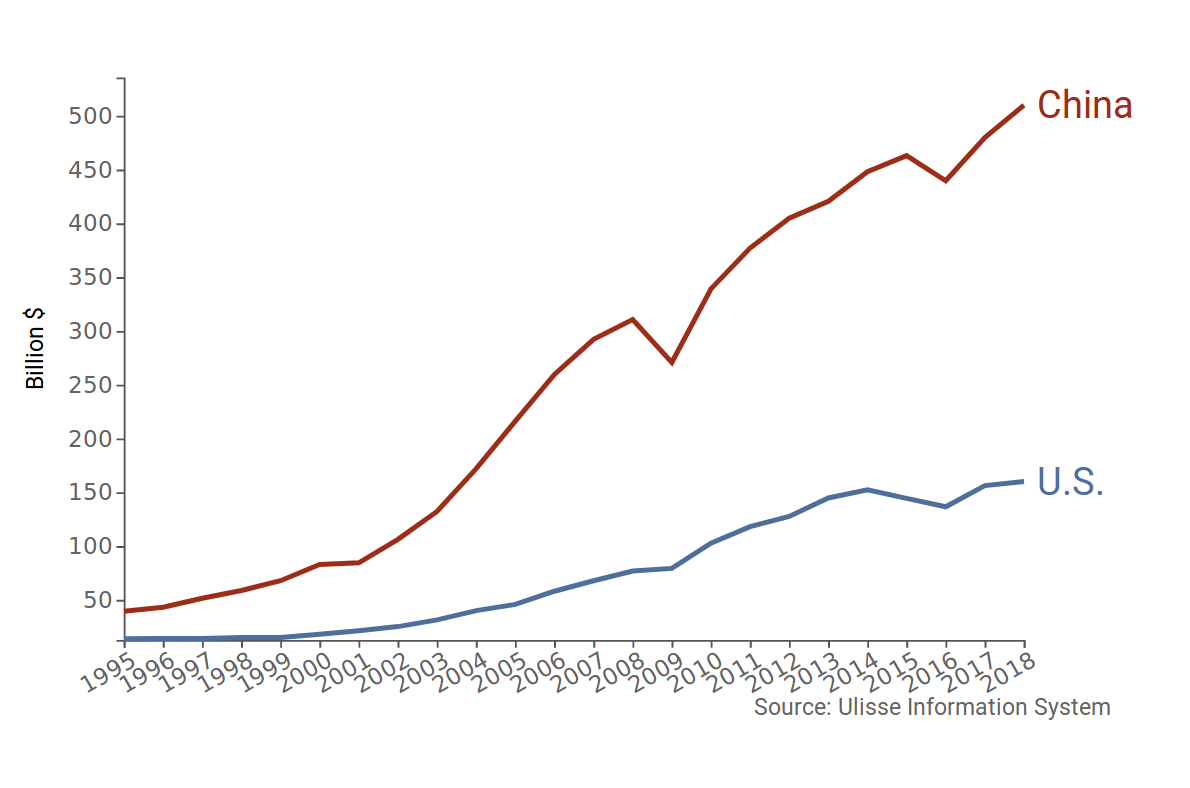 Furthermore, the amount of the bilateral goods trade deficit in 2018 did not show any signs of reduction. The estimates made by StudiaBo, and available in Export Planning-Market Research forecast that 2018 will close with a spread of about 350 billion dollars, marking a further increase compared to 323 billion dollars in 2017.
However, the trade balance includes also bilateral flows of services, thanks to which America mitigates the trade deficit with China, but only minimally.

For the moment, the US administration seems to prefer an administrative action towards the Asian partner, making complicated any kind of forecast.