The news of the week in the world of foreign exchanges focus on the normalization of monetary policy. Yesterday the ECB Governing Council Meeting took place in Frankfurt and confirmed the end of quantitative easing in December 2018. However, the ECB will continue to reinvest the capital repaid from maturing securities purchased within the program. Despite a formal end to the QE, monetary policy therefore remains accommodative.
On the very same theme of the slow normalization of monetary policy is recent rise in interest rates in Israel.

On November 26th, Israeli central bank (BOI) raised its benchmark interest rate from 0.1 to 0.25%, the first rate hike since 2011. The real interest rate remains negative, considering a 1.2% inflation rate in November 2018 (YoY). However, this constitutes a first step towards the normalization of monetary policy.

The decision of the central bank surprised the markets. The main reasons behind this trace to the following factors:

Effects on the currency

The BOI move fits fully within the framework of the slow normalization process of monetary policy that is taking place worldwide. In this context, what is the dynamics showed by the currency, the Shekel?
Looking at the effective exchange rate of the last 4 years, the currency shows a general tendency towards appreciation. According to the Bank of Israel, the main risk of a progressive increase in rates would therefore be an excessive appreciation. As a matter of fact, the Shekel tends to be a strong currency: it is supported by a positive current account balance, thanks to the export of services in particular in the field of computing and software, as you can see in the following graph. 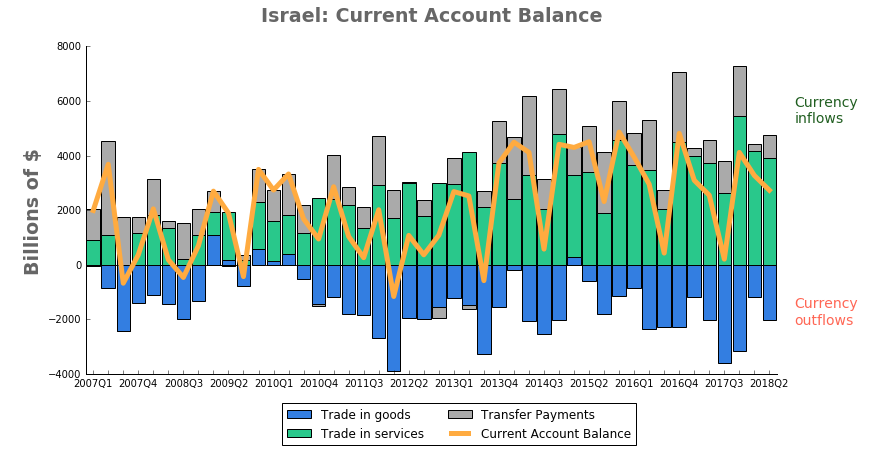 The excessive strengthening of the currency has been counterbalanced, in recent years, by the purchase of foreign currency reserves. Now the Bank of Israel holds the sixth largest international reserves stock worldwide: according to SIUlisse1 data, this amounts to almost 114 billion dollars in October 2018.

1. The data of the Ulisse Information System can be accessed through the Analytics section of the ExportPlanning platform.