Like Estrada before him, Duterte ignores the economy at his peril

In this article the author is very critical with Rodrigo Duterte, the current president of the Philippines. The author claims that the country may need a "return visit to the economic emergency room". The improvements recorded during the presidency of Benigno Aquino (2010-2016) seem to have vanished after 860 days of presidency Duterte, which is dealing with issues more attractive to public opinion (war on drugs) than the real problems of the country. Results are a slowed growth, an higher inflation and a weaker currency.

According to the author, inflation is the biggest problem. In October this was 6.7%, a much higher rate than the central bank's 2-4% target. In this situation the interest rate at 4.5% (brought to 4.75% in November) is too low.
Another crucial factor is the increase in demand not supported by an increase in productivity and companies' competitiveness. This causes higher growth in imports and a progressive worsening of the trade balance.

The author reports that the fight against drugs is not being accompanied by an increase in fight against corruption. In just over two years, the Philippines moved from 95th place to 111th place in the ranking of administrative honesty (corruption perceptions) published by Transparency International (see the graph below). 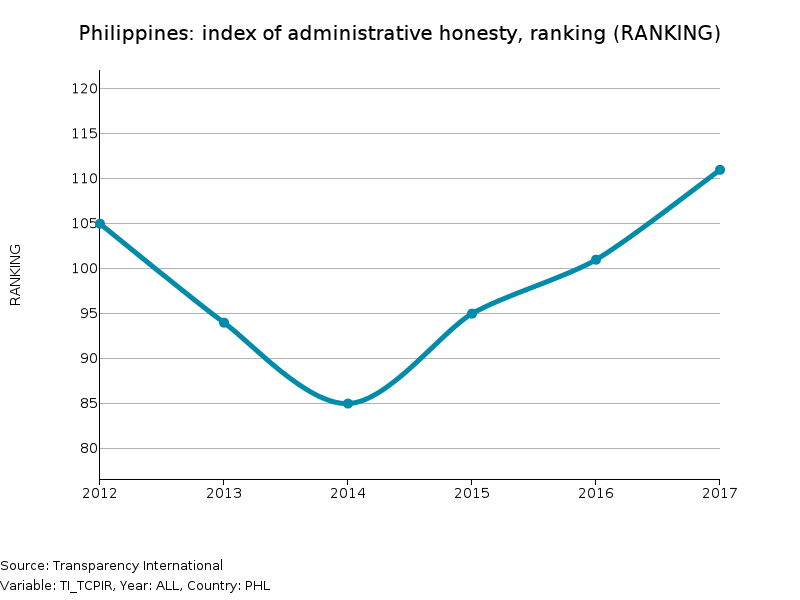 Finally, the author compares Duterte's political evolution to that of Joseph Estrada, 13-th president of the Philippines. Estrada, after having won the 1998 presidential elections by a large margin, was more concerned with his own interests than with the country's problems. After three years he had to resign because of the high popular discontent.

The European Commission has reached an agreement in principle on bilateral investment: opportunities and critical issues [ Read all ]

The Great Lockdown sustained world demand for table tennis equipment, with an increase in market share even for smaller exporting countries [ Read all ]

Financial markets reward the consolidation of the Chinese recovery [ Read all ]

EU Exports of Machinery to the US: 2020 Trade Figures