After record year 2021, forecast still favourable for the world trade of household products

After a record in 2021 (see the article "Household Products in 2021: a Record Year"), the world trade of Household Products1 is expected to confirm growth dynamics also in the 2022-2025 scenario.
Based on the forecasts formulated by StudiaBo on the basis of the new macroeconomic scenario of the International Monetary Fund (and available in the Forecast Datamart of ExportPlanning), the world trade of Household Products may show this year an increase in values in euro of +9.4% (favored by a depreciation of the euro expected to be almost 5 percentage points compared to the dollar), corresponding to an increase of over 67 billion euro, which will allow us to reach a new maximum point (equal to about 782 billion euro).

The largest contributions to growth in world demand in 2022 will come, significantly, from the US market, which - with an increase in imports of Household products of more than 23 billion euros on an annual basis (equal to +13.4 per cent) - will be the main driving force behind the sector's demand.
Double-digit increases in percentage values in euro are also expected from the Canadian market (+13%), with an average annual increase of 2.7 billion euros in imports of Household products.
The Mexican market, expected to grow by +6.8% in euro values, will offer an additional contribution of more than 600 million euro to the growth of world demand for Household products.

As for European markets, Germany, United Kingdom, France, Netherlands and Poland are the main contributors to the growth in imports of the Household System, with an overall increase in European markets of nearly 15 billion euro.

With reference to the Asian markets, the Japan will be the largest contributor to the area in 2022, with an increase of almost 2 billion euro (equal to +6.6%) in imports of Household products. China, Vietnam, South Korea and India will be the other major Asian markets with the fastest growth in 2022, with increases of 1.4, 0.9, 0.8 and 0.7 billion euros respectively. 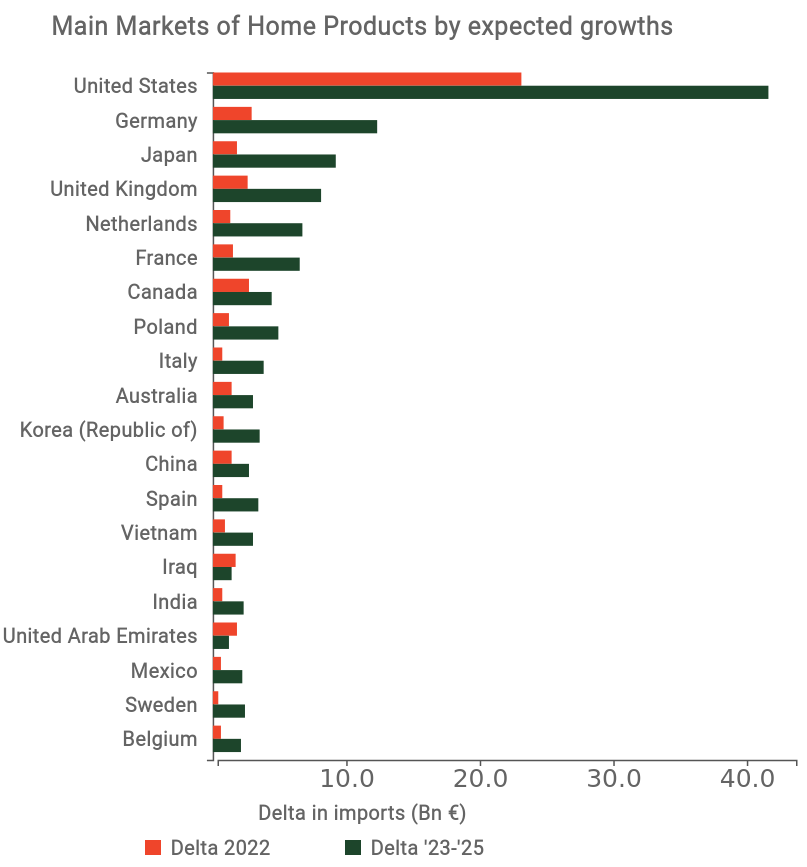 The forecasts for the three-year period 2023-2025 indicate an overall growth in world trade in products of the Home System of more than 178 billion euros, corresponding to an average annual increase of +7.1 per cent in values in euro (in an expected context of stabilization of the euro / dollar exchange rate).

In the 2023-2025 scenario once again it will be the US market that will drive the growth in world demand for the Household System, with an increase cumulative of almost 42 billion euros (+6.6 per cent on average per year) in imports of the sector. In the North American area, further growth opportunities may come from the Canada and Mexico markets, which are expected to show an overall increase of around 6.5 billion euros.

Other important contributors to the growth expected in the three-year period 2023-'25 in the sector's world demand will be the Germany markets (+12.3 billion euros in the three-year period as a whole), and United Kingdom (+8.1 billion cumulative). Positive confirmations also from the Netherlands, France and Poland. Furthermore, the expected increases in sectoral imports from Italy (+3.8 billion euros over the three-year period) and Spain (+3.4 cumulative billions). Overall, the European markets for Household products will be able to experience an average annual growth of +7.1 per cent in values in euros, in line with the overall dynamics of world trade in the sector.

Even more accelerated than the average is the expected dynamics for the Asian markets, which in the three-year period 2023-2025 are expected to show an increase in imports of Household products in the order of +8.3 per cent on average per year in euro values. In particular, the Japan (+9.2 billion euros for the period as a whole) will show the most significant growth in its own Household System imports. In addition, the expected performance of the Vietnamese market is underlined, which is expected to grow by 3 billion euros in the period 2023-'25. in imports of the sector (equal to + 11.1% annual average), and the confirmation of the South Korean market , whose imports of Household products are expected to increase overall by 3.5 billion euros in the three-year period examined, even more dynamic than those of China (+2.7 billion cumulative) and India (+2.3 billion).

The forecast scenario formulated for the period 2022-2025 highlights significant growth opportunities for companies exporting products from the Household System.
As highlighted in this article, numerous markets appear that will be able to offer significant ideas for an increase in foreign turnover in the sector in the next four years.
For an exporter in the sector, the development prospects of the various international markets constitute particularly relevant information for directing their commercial investments on those characterized by the greatest expected growth.

1) For a list of the sectors considered in this analysis, please refer to the following description.