The 2022 edition of the Harmonized System introduces the new customs code related to electric bicycles and scooters. An analysis of the dynamics of US imports.

Harmonized system and change of classification

Among industrial classification systems, Harmonized System codes are commonly used in the process of exporting goods. The Harmonized System is a standardized numerical method for classifying traded products. It is used by customs authorities around the world to identify products when determining duties and taxes and for collecting statistical data.
The Harmonized System classification is periodically updated every five years. With the release of the second quarter 2022 pre-stimate, all quarterly databases in the ExportPlanning information system have incorporated this change in classification. For the purposes of this article, we will focus on the U.S. Conjunct database.
This change in classification means that for the customs codes under review, through an appropriately constructed system of weights, the historical figure is reconstructed.
One of the codes introduced with the new classification, and one that is of distinct interest at the current juncture, is the Ulysses code UL871160, corresponding to electric bicycles and scooters.

Buoyed by changes in consumption and mobility preferences, as well as growing interest in the topic of sustainability, worldwide demand for electric bicycles and scooters has risen particularly sharply over the past few quarters, as shown in the graph below. 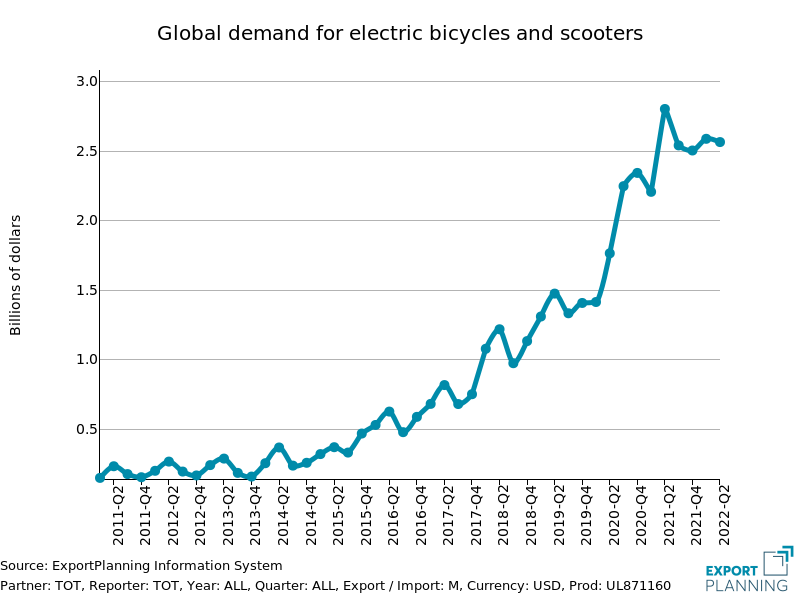 It is particularly evident how worldwide demand for this type of product sprinted rapidly during the very pandemic year, further supported by the changes induced to mobility by the spread of the pandemic.
For the industry, the United States is a major importing country on an international scale, holding about 15 percent of world demand.
It is estimated that in 2021, U.S. imports of electric bicycles and scooters were worth about $1.3 billion, and in the first half of 2022 they grew by about 60 percent over the corresponding period in 2021.

Those who have carved out a primary space in the U.S. market have been primarily the Asian partners, as shown in the following chart of the top ten exporting countries to the U.S. market in the segment.

Specifically, among the Asian bloc countries in first place is China, with exports of $877 million, second is Taiwan, with exports of $478 million, and followed by Vietnam and Thailand, holding export values of less than $50 million.

On the other hand, it is quite evident that European Union countries instead play a marginal role in serving the U.S. market. Among them, the largest exporters are the Netherlands with 29 million, Germany with 23 million and Spain with 19 million.

Although in a lesser position than the Asian players, the latest available data shows that EU exports have shown a marked growth performance in the U.S. market over the past few quarters. The following graph shows the time series of EU exports of electric bicycles and scooters to the United States as of the year 2019.
As can be seen, EU exports in value to the United States grew exceeding $40 million in the last quarter. The country that has contributed the most to this growth is the Netherlands. 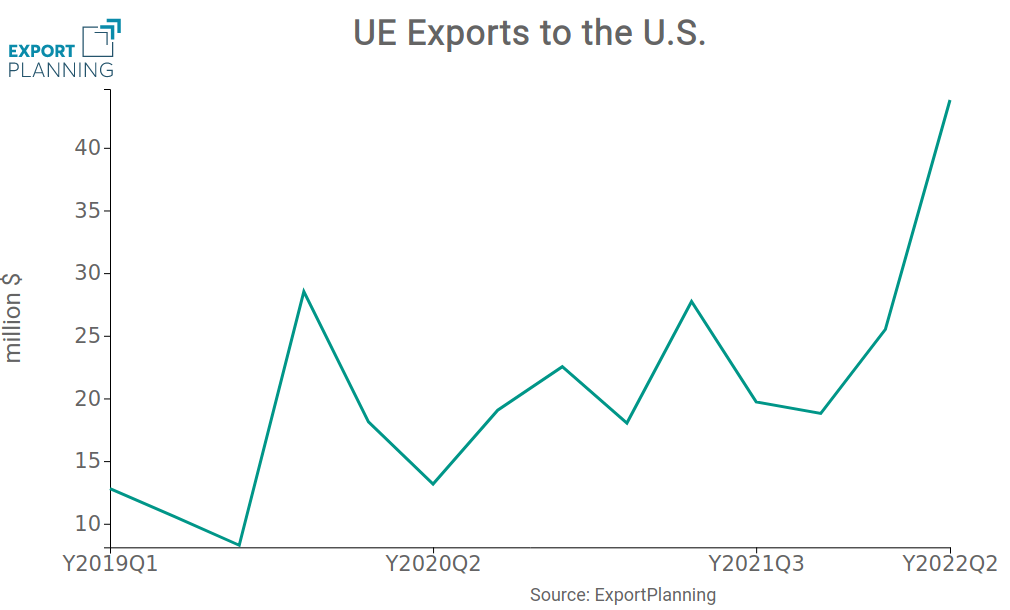 The analysis just conducted testifies to how active mobility is an increasingly central theme in the growing focus on the environment and sustainability. In addition, the focus by regulators on introducing new product categories within customs systems is an indirect indicator of the strong changes taking place in international consumption preferences.
Currently, Asian players hold a commanding lead in both international and U.S. markets, but the industry's next development will depend closely on regulatory developments in the segment. Indeed, the recent exploit of the scooter sector in urban mobility, which is coupled with the growing phenomenon of electric bicycles, is increasing the focus on safety.