At a time when the international economy is slowing down, it is crucial to identify those geographies that are at the stage of accelerating product importation

The most recent data available in ExportPlanning, relating to the pre-estimates of the third quarter of 2022 of world trade, testify the slowdown in the international economy.

An example of a sector that appears to have been impacted by the slowdown in progress is that of textile machinery: in the third quarter of the year, according to StudiaBo's pre-estimates, world exports in the sector showed a very modest trend growth in values at constant prices (+2.3% Y-o-Y), confirming the signs of a slowdown already emerged in the 2nd quarter of the year (+3.2% Y-o-Y in values at constant prices). 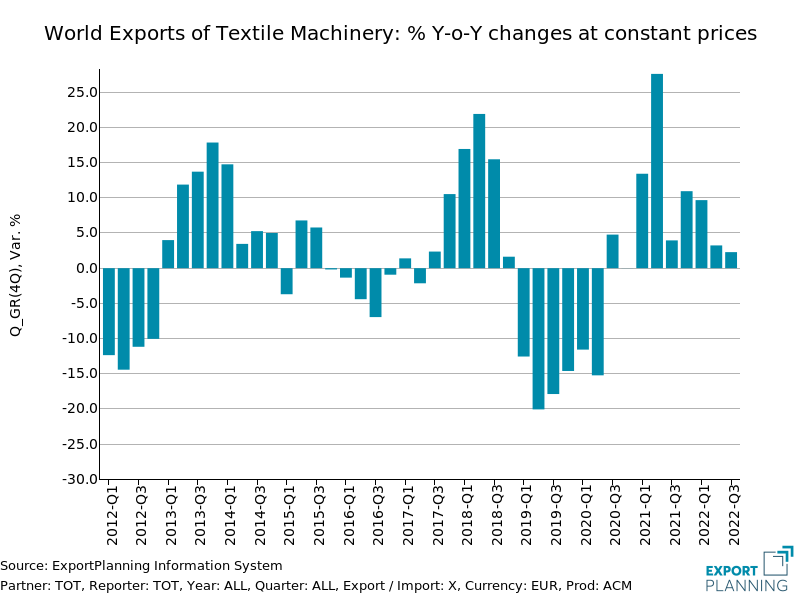 The context of high uncertainty in sectoral sales is also reflected in the dynamics of world trade in the downstream sectors of the supply chain: the sector of intermediate goods in textile materials, after a beginning of the year with growth trends to double-digit (continuing in the recovery phase that took place in 2021), in the most recent half-year it fell back on average rates close to 2% in values at constant prices, probably signaling the start of a phase of reduction of warehouse stocks in the textile-apparel supply-chain.

In a context of high uncertainty of the demand context, it becomes essential to be able to identify "structurally" markets in an acceleration phase

Grasping the acceleration phase of a product's imports in a certain market is a significant growth driver, and an ally in fighting downturns, as documented by articles recently published in ExportPlanning magazine1.

The case of Pakistan

A first case of great interest for textile machinery exporters is the Pakistan market. The calculations carried out by StudiaBo within the ExportPlanning Information System highlight an acceleration phase of this market with particular reference to the segments of machines for Weaving, for Knitwear, for Finishing and for Other textile Machines.
It is, indeed, a market that seemed to have experienced a strong start at the beginning of the century, only to re-enter a path of poor growth. In the last decade, however, Pakistani imports have increased by over 62 million euros (+ 181%) in the Finishing segment, reaching absolute maximum points in the Weaving (close to 106 million euros), Knitwear (64 million euros) segments. euro) and Other textile Machinery (over 16 million euro).

The acceleration phase of the Pakistani market is also witnessed by the strong growth evolution of national production of textile-apparel products: in particular, in the last decade the Pakistani production of Outerwear (see the graph below) has almost tripled (from less than 2 billion euros to 5.5 billion in 2021); the national production of underwear and hosiery has increased in the last decade from around 1 billion euros to around 1.8 billion in 2021. 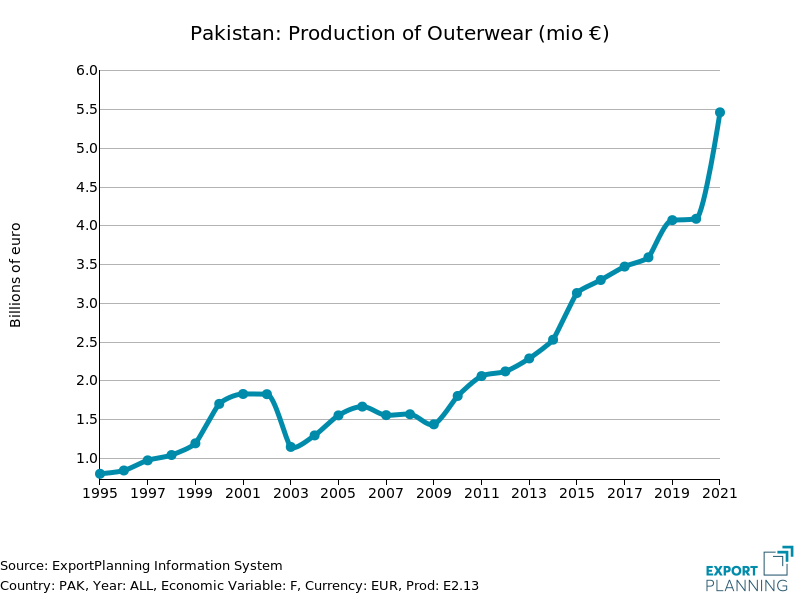 
The case of Turkmenistan

In the segment of Weaving machines, characterized by world trade in a stationary phase for several years2, the case of the Turkmenistan: this market, which throughout the experience of the first decade of the century and for the first half of the last decade had shown almost irrelevant values of imports of weaving machines, has begun to show accelerated dynamics in the most recent period, reaching the last year to close to 9 million euros. These are still moderate values, but have been growing exponentially in recent years. 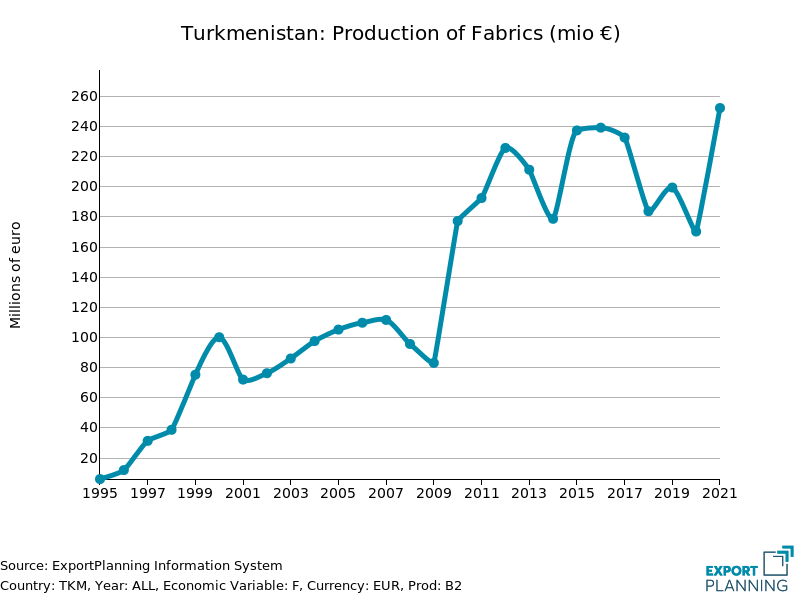 
The acceleration phase of the Turkmen market is also witnessed by the evolution of the national production of Fabrics: in particular, the Turkmen production of Yarn has increased from about 60 million euros the end of the last decade to about 180 million in the most recent period; Turcoman production of Fabrics (Knitted and Woven) is also growing, albeit with less significant increases. Finally, the recent growth (last two years) of Turkmenistan's production of Non-woven fabrics and fabrics for technical use should be highlighted.

The case of Guatemala

In the Finishing machines segment, a market that is still small in size but characterized by an acceleration phase is that of of Guatemala. As can be seen from the graph below, after a relatively long period of "latency", in the last decade the Guatemalan imports of the segment have shown an acceleration phase, with a cumulative growth of 112%, systematically settling at annual levels close to or over 10 million euros. 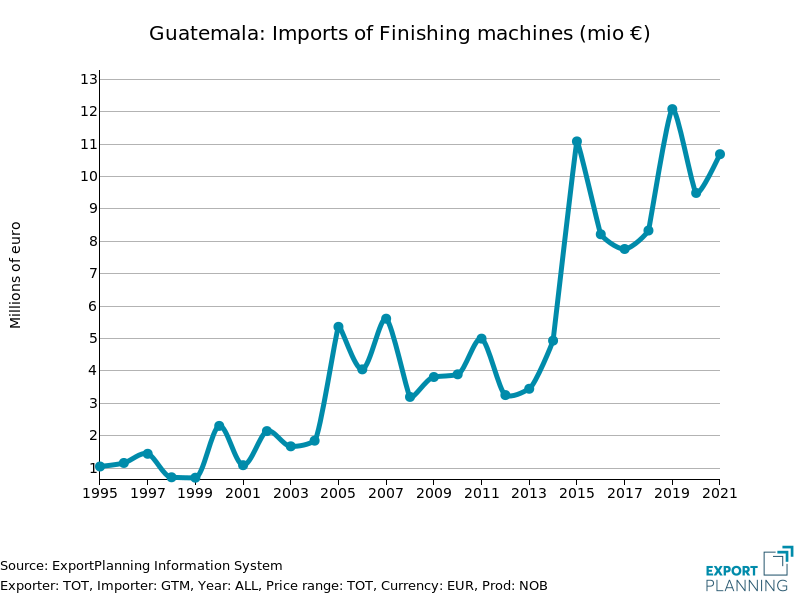 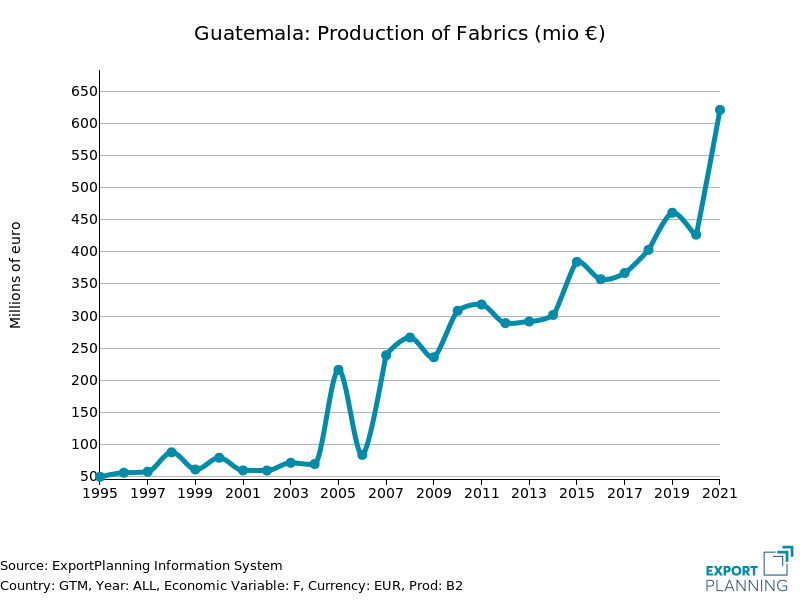 In a context of slowdown in international demand for textile machinery and, in some segments, of growth that has been generally not very dynamic for some years, it is essential for sector exporters to be able to identify those markets that are going through a "structurally" phase accelerating the dynamics of imports of products in the sector.

Through the ExportPlanning tool Market Selection it is possible to a company to identify the accelerating international markets in its business area (marked by the customs code or by specific aggregates of codes).

1) See the following articles in this regard: 2) World trade in Weaving machines has shown overall stable dynamics over the last decade, with an average annual rate of change (CAGR) of just +0.8 per cent in euro values.