An Overview Of The US Aircraft Parts Industry

In 2021-Q1, exports of California and Connecticut have returned to pre-crisis levels, while North Carolina still lags behind

Since the start of the Covid-19 pandemic, daily life across the globe has dramatically changed. Along with the human tragedy, the ongoing crisis has resulted in a huge damage to international mobility. The dramatic drop in demand for passenger air transport due to global containment measures is threatening the viability of many firms in both the air transport sector and the rest of the aviation industry. Strong inter-industry linkages make it nonetheless an important part of the economy. In particular, the air transport sector and the aircraft parts industry are inherently intertwined. Manufacturers of aircraft parts play an important role in the government's efforts to boost exports as they account for 42% of total US vehicle components exports. Furthermore, the industry is running a substantial trade surplus, which stood – according to ExportPlanning data - at almost $13 billion for 2019.1

Sales of U.S. aircraft parts have experienced steady and strong growth across the last decade. Overall, the value of exported aircraft parts rose by an average 7% (CAGR) between 2011 and 2019, when they reached a record amount of $62 billion. Yet the impact of the Covid-19 crisis was unprecedented, with exports falling by 34.3% in 2020 with respect to the previous year. That looks clearer when comparing the American performance with that of the other world economies: whilst before the pandemic US foreign sales outperformed the others, they suffered a bigger contraction in 2020 – as illustrated in the following graph. 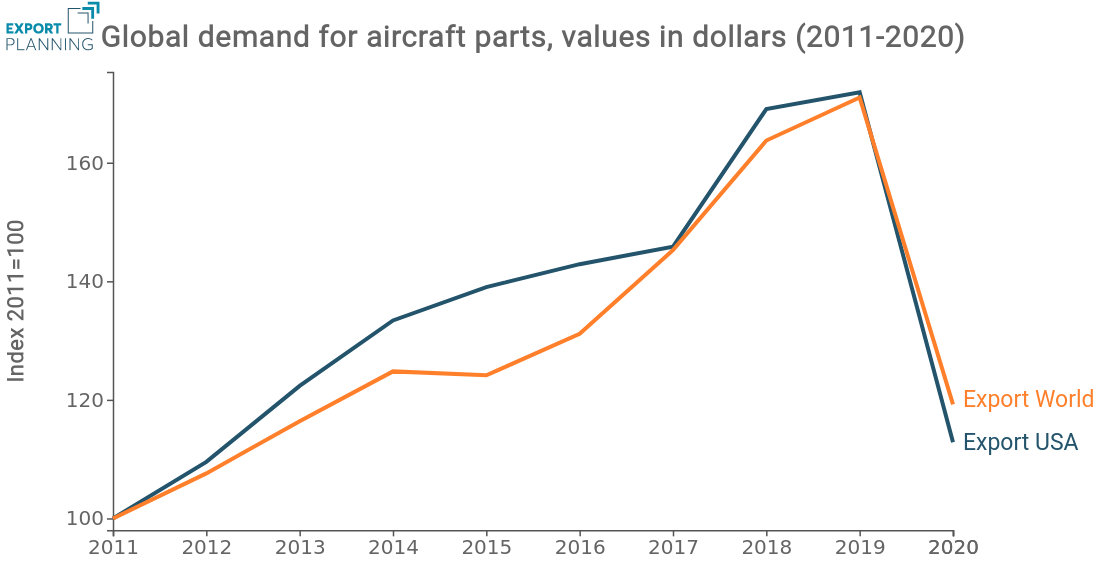 During 2020, US suppliers in Europe sold the highest dollar worth of exported aircraft parts, with shipments to France and Great Britain valued respectively at $4.5 and $4 billion. In third place are Canadian importers ($3.3 billion), followed by German ($3.1 billion) and Japanese ($2.6 billion). Among world countries, Saudi Arabia generates an ongoing demand for U.S. aircraft parts: it ranks 10th on the list of top markets for American exports and is the largest market in the Middle East for this kind of products, with purchases going from $232 millions in 2011 to about $1.2 billion in 2020.

Sales performance differs according to the areas of destination. The following graph shows the YoY growth rate of aircraft parts exports in the last few years. Looking at the graph, it is clear that the impact of Covid-19 has been widespread across all the regions. By contrast, the import growth rates of both European and non-European countries were less significant than the Asian and Middle East ones before the pandemic. That was also due to the round of tariffs on the Airbus-Boeing dispute which somewhat harmed exchanges after 2018. 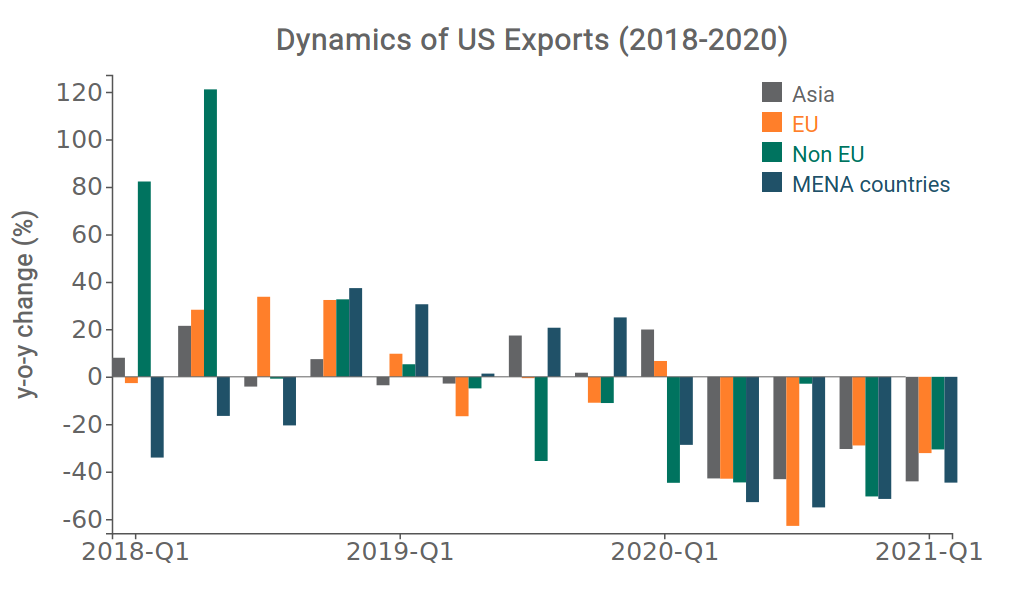 A Look at Federal State Data

The US aircraft parts industry is concentrated in specific areas of the country. It is therefore particularly important to take a closer look at trade data by individual states. The graph below displays the recent performance of the largest exporters (to better identify the dynamics of the series in spite of their different orders of magnitude, we take 2019-Q4 as base quarter and we assume it to be equal to 100).

We can observe that the export performance is asymmetric. Whereas California and Connecticut have rapidly closed the gap with pre-crisis levels, Texas and the District of Columbia have not recovered yet. Meanwhile, North Carolina is still lagging behind its neighbours.

Despite some positive signs and prospects for recovery, exports of aircraft parts remain substantially below pre-pandemic levels. Indeed, this amounted to $9.4 billion in 2021-Q1, compared to $15.2 billion in 2019-Q1. Among US states, California and Connecticut gained significant competitive strenght in early 2021. Next data releases will tell us whether the unfolding trends are poised to continue in the coming months.

1Those codes under the Chapter HS88 (Aircrafts, spacecrafts and parts thereof) are not declared by the US Census Bureau. ExportPlanning estimates them through the import declarations of other countries