As is now well known, over the past two years the automotive industry has been experiencing a sharp slowdown exacerbated by the outbreak of the pandemic, not only in the U.S. but worldwide.
The recent release of ExportPlanning pre-estimates of Q2-2021, accessible through US Trade datamart, allows to document the economic situation of US Automotive industry, specifically considering exports of components vehicles, in order to map current recovery. 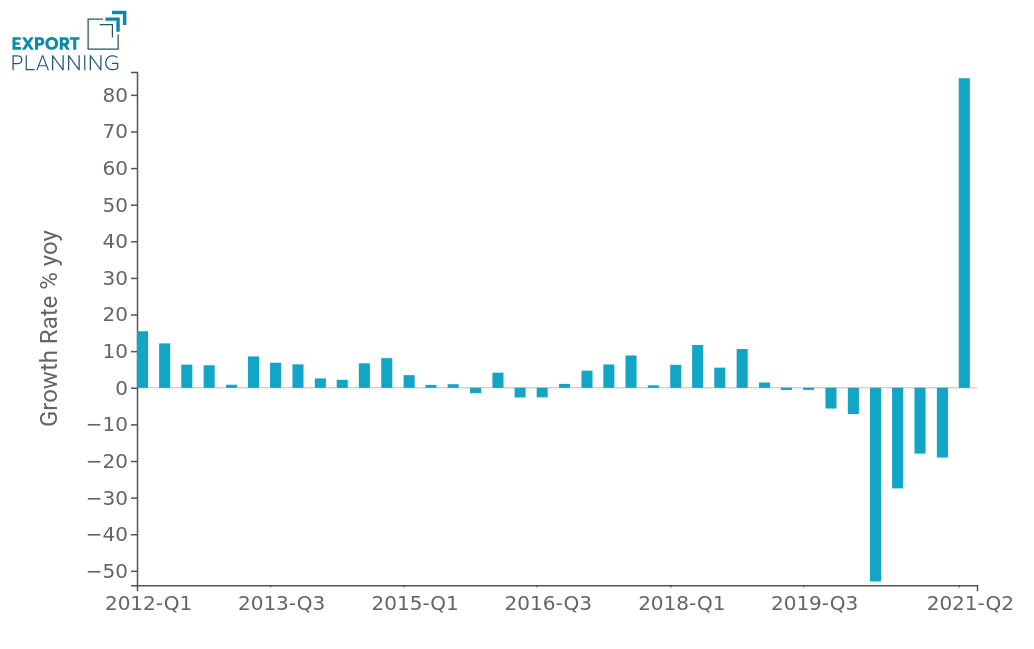 As we have already reported in several articles, after closing 2019 in negative territory (-1.4%), US vehicle components exports had suffered a -26.7% drop in the pandemic year. Moreover, data for the Q1-2021 confirmed a further contraction, showing an y-o-y decrease of -19.07%, and of 18% if compared to Q1-2019 values. However, after two tumultuous years, American exports of vehicles components try to look ahead recording a double-digit growth of 85% on a trend basis, despite exports of vehicle parts remain substantially below pre-pandemic levels (-13% over to Q2-2019).

While domestic exports are below pre-crisis levels still, at the level of individual states there is significant heterogeneity.

After providing an initial overview on Q1-2021 results of US industry of vehicles components, it is now particularly interesting to take a closer look at trade data by States. Gathering Census Bureau data on Federal States trade flows until May 2021, ExportPlanning estimates exports performances by Federal States (see graph below).

The US vehicles parts industry is concentrated in specific areas of the country, namely Texas, Michigan, California, Indiana and Ohio.
The map below shows at a glance the states that have recovered 2019 values focusing on the period between January and May; in the tooltips are reported the compound annual growth rate between 2017 and 2019, along with the worth recorded in 2019, which have been calculated with the aim to provide a comprehensive overview of the current status of the American components vehicles industry.

By positioning the mouse on the Federal State, a table summarizing data related to the selected States will be displayed.
Source: ExportPlanning elaborations.

We can observe that the export performance is heterogeneous, with only a few federal states, which also belong to the least relevant in terms of exports such as Nevada, Montana and Oklahoma, that was able to bridge the gap with 2019.
In contrast, Federal States that historically lead the field are showing results still far from pre-pandemic levels.

The Pivotal Role of Lithium Accumulators

Observing the chart above it is clear that, net of lithium accumulators, which experienced significant growth even in the year of the pandemic, the remaining batteries products experienced a broad fall in the annus horribilis. After a further decline in Q1-2021, almost all products are giving signs of significant upward trend in Q2-2021, in line with the trend of the sector.
As for nickel electric accumulators, which were particularly popular in the second half of the twentieth century, these type of batteries are certainly the product that registers the greatest decline, reflecting a change in preferences to the advantage of lithium batteries.
However it is interesting to point out that, the rapid growth observed for US exports of lithium accumulators confirms what has emerged at world level over the last years and which we reported in a previous article: the dominance of lithium batteries on a global scale, reflecting a stronger interest of technological research in improving the efficiency and sustainability of batteries.

In light of what has been observed, the outlook for the post-Covid scenario for US Vehicle Components Industry looks encouraging for the first time in a long time. In addition, the growth experienced by some Federal States in early 2021 may pave the way for new industry-leading areas to emerge.

An Overview Of The US Aircraft Parts Industry

In 2021-Q1, exports of California and Connecticut have returned to pre-crisis levels, while North Carolina still lags behind [ Read all ]