A Historic Deal: the Signing of the Regional Comprehensive Economic Partnership

The major economies of Asia and Oceania entered the largest regional free trade agreement, shifting growth prospects (even more) to the East

On the international trade front, one of the most important news in recent days has been the signing of the largest free trade agreement in the world: the Regional Comprehensive Economic Partnership (RCEP). The agreement, signed last 15 November, establishes a trade area that includes about 30% of the world's GDP and about 2.2 billion consumers, with 10 ASEAN economies (Indonesia, Vietnam, Cambodia, Indonesia, Laos, Malaysia, Myanmar, Philippines, Singapore, Thailand and Brunei) and the main economies of the Asia-Pacific: China, Japan , South Korea, New Zealand, Australia.
Proposed for the first time in 2012, the agreement was signed after several years of negotiations, which initially involved also India. Over the past year, however, the Country left the negotiating table, concerned about the potential threat of China to the domestic industry.

Although many details are yet to be disclosed, the RCEP is divided into 20 chapters, providing for a specific discipline on the reduction of tariff barriers - with the aim of reducing 90% of existing tariffs over 20 years - and introducing a harmonisation of non-tariff barriers (rules of origin and technical standards). The trade agreement also provides for specific rules on investment protection, e-commerce and services liberalisation. Unlike the FTAs concluded by several countries of the area with the European Union, the new RCEP is more focused on tariff abolition and trade facilitation, as it does not provide for a discipline on more modern issues, such as environmental and labour standards or a regulation for public procurement. According to several commentators, it was precisely this characteristic, less ambitious than the new FTA agreements, that represented a strength during negotiation phase, since the agreement includes countries with even profoundly diverse degrees of economic development.

However, the reasons why the new trade agreement should be seen as an historic pact for the future of international economic relations go far beyond the simple commercial aspects. They relate mainly to four main geo-economic considerations:

The process of regionalisation of value chains within the "Asian bloc"

The introduction of an integrated economic Asia-Oceania area involves a region where internal trade already accounts for almost 30% of total international flows: in 2019 intra-area commercial flows reached $2366 billion, as shown in the graph below. 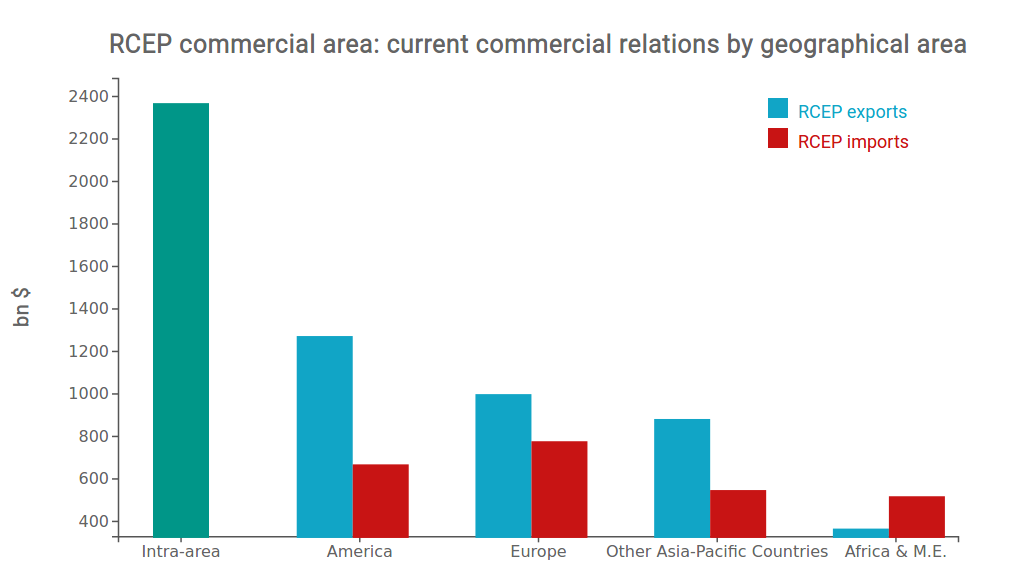 Trade with the other geographical regions is much lower and, in almost all cases, the value of exports is higher than imports, with a trade surplus of the RCEP area.
More than a third of internally traded goods is represented by intermediate goods, highlighting an already existing significant economic interdependence within the area. The most significant gains from the trade deal are expected in the medium term, deriving from the harmonisation of the rules of origin and the definition of common technical standards, currently subject to several disciplines and often dependent on previous bilateral agreements.
The trade deal will therefore help to strengthen the degree of integration existing between different countries of the area, expanding the basket of goods traded and encouraging local businesses to seek suppliers within the RCEP region.
It should also be stressed that the trade agreement involves countries with a very different degree of development, which therefore have complementary cost advantages. This evidence might also allow an efficient productive specialisation in the several districts.

From the point of view of geopolitical balances, the agreement marks a fundamental step in delineating the perspective influence of China in the region. In fact, China holds a position of absolute leadership in the market, with a share close to 30%. The growth of the Dragon Country in the area has also been uninterrupted and has affected all the main categories of goods, as shown in the graph below.

While the trade agreement gives China an incentive to strengthen its already significant supply chain links, it also builds a large potential market for its consumer goods. The strategy is in line with the objective of strengthening the domestic industry announced by the country as part of the 14th Five-Year Plan, which will consolidate the gradual upgrading of China's exports of goods, especially in technology-intensive sectors.

A signal in favour of multilateralism

In a context of growing protectionism, the agreement goes against the trend, strengthening the involvement of the countries in the area in supporting a multilateral bargaining mechanism. The signing of the RCEP has also speeded up economic integration in North-East Asia establishing a common economic future, after negotiations on a possible China-South Korea-South Japan agreement had been stalled for several years.

The competitive challenge for US and EU

The signing of the agreement poses significant geo-political challenges for the United States and the European Union, for which a significant reduction of influence in an area of strong growth could be expected, to the benefit of China. However, while the EU has been an active partner within the region in recent years, signing Economic Partnership Agreements with Japan, South Korea and Vietnam, and engaging in intensive negotiations with China, the same cannot be said for the US.
After the withdrawal from the Trans-Pacific Partnership (TPP) by outgoing president Donald Trump in 2017, the definition of the possible role of the US in the economic future of the Pacific region will be left to the new President-elect Biden. One of the Obama administration's objectives during the TPP negotiations was to strengthen economic ties in the Pacific as a counterbalance to the rise of the Dragon country, through a "new generation" agreement that would also regulate labour and environmental standards.
The signature of the RCEP agreement could be an opportunity to resume the Atlantic dialogues and define a common strategy by the EU and the US.