After the initial shock following the Omicron variant detection, financial markets return to the same dynamics of recent months

A week of settling on the markets after the fears that have emerged in recent weeks linked to the discovery of Omicron, the new Covid-19 variant from South Africa.

On stock markets, Covid has returned to bring storm, primarily destabilizing European stock exchanges. As the chart shows, on Friday 26 November Piazza Affari (FTSE MIB) alone lost 4.4%, followed by Paris (CAC 40), London (FTSE 100) and Frankfurt (DAX) which fell 4.3%, 3.9% and 3.4% respectively.
Despite the closure of the U.S. stock market for the Thanksgiving holiday, the S&P500 also underperformed in the following days with a 2.26% thud, the largest since February.

In the following days the optimism returned on the European lists, comforted by the words of Anthony Fauci, the highest advisor of the White House on Covid, according to which the new variant "is not more serious than Delta Variant". Therefore, the Black Friday of Omicron has been translated in a substantial recovery of the main indexes, that, however, close the last session of the week slightly undertone.

The forex markets also witnessed an similar dynamic.
Although at first the impact of the new infection offered some support to the euro, international investors seem to have already discounted their worries, reversing the initial bearish bets. 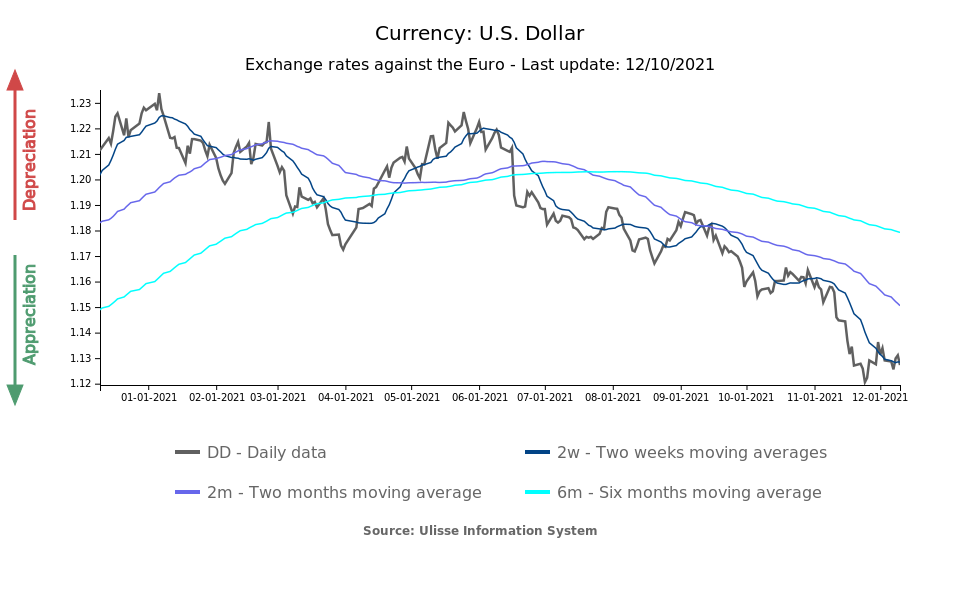 After slowing down last week, the euro-dollar exchange rate looks at new depreciation risks, closing the financial week at the level of 1.13 dollars per euro.

Although the balance of the week points to a substantial stability and continuation of the current dynamics, the next few days will be crucial to determine the short-medium term trend of the major currencies.
During the course of this day, data on inflation of November were released in Germany and the United States. While the German figure was in line with expectations (November -0.2% on a month but +5.2% on an annual basis), there is concern about American inflation which reached +6.8% on an annual basis, the highest increase since June 1982. According to analysts, this information will be at the center of the debate during the meetings of the main central institutions scheduled for next week.

As documented last week, Powell's statements on the non-transitory nature of inflation suggest that during the last meeting of the year, on December 14-15, the FED is expected to accelerate "tapering", announcing more aggressive timing for the interest rate cut planned for 2022, with the aim of calming prices. In this context, the US inflation figure for November only provides further elements in favour of this bet.
Moving to the other side of the ocean, next Thursday will be held the expected Press conferences of the Bank of England (BoE) and the European Central Bank. The uncertainty fueled by the Omicron variant has reduced the expectations of observers for a rate hike of the BoE in the short term, although a symbolic cut of 15 basis points is not completely excluded. As for the ECB, confirmation is expected that the 1.85 trillion euro pandemic stimulus scheme, called the "Pandemic emergency purchase program" (PEPP), will end in March. However, debate has already begun over how much support to leave in place once the PEPP ends.

Monetary policy focus: the cases of Brazil, Czech Republic and Turkey [ Read all ]