A record year for US Soybeans

After a grueling trade war between the world’s two biggest economies, the confrontation reached a first truce when US and China signed the “Phase One” agreement in early 2020. That agreement, however, has not exactly played out as inteded, with total US exports to China accomplishing only 56% of their 2020 target (as highlighted in a recent article).

Among the products covered throughout the deal, agricultural goods are the ones which went closer to fulfill export-related targets: across 2020, US agricultural exports to China amounted to nearly $25 billion, against a target of $33.4 billion, thus outperforming both manufacturing and energy exports. Overall, American agricultural exports increased by 7% compared with 2019, according to the United States Department of Agriculture (USDA). Despite several commodities joined this trend, special attention should be paid to the most exported one: soybeans.

As of 2019, the value of soybean foreign sales reached $18.8 billion, making the US the second largest exporter after Brazil (Brazilian exports totaled $27.6 billion). Argentine, albeit less intensively than its continental neighbors, sold a significant amount of soy abroad: in 2019, it exported $3.7 billion worth of soybeans. The bulk of global soybeans trade is directed to China, which far surpasses Mexico as leading importer. As a matter of fact, China purchases most of soya grains from South and North America to make animal feed.

Receiving around half of total US exports last year, China is doubtlessly America’s main trading partner when it comes to the soybean industry. Data reveal that soybean exports to China plummeted 74% in 2018, hitting a record low in the following year as well. Chinese reduced soya purchases were largely due to the outbreak of African Swine Fever, which dramatically cut the pig herd. Furthermore, soybeans had been one of the first American products on which China imposed 25 percent retaliatory tariffs, once trade war with the US began.
US exports rebounded to about $12.6 billion in 2020, hence returning to 2017 levels. As shown in the graph below, exports to China and to the rest of the world averaged respectively $12.6 and $10.4 billion. Increasing trade with China helped offset declining exports to other major markets: whereas sales to the dragon country increased by 56% between 2019 and 2020 (from $8 billion up to $12.6 billion), total sales to other countries decreased by 2%. 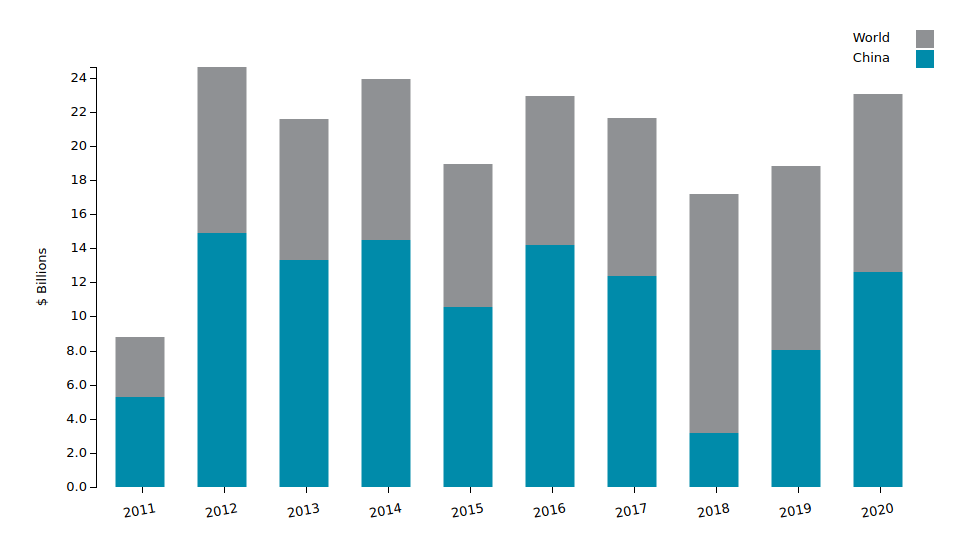 
Looking beyond the US, we might also find it beneficial to analyze whether world trade of soybeans went through significant losses as a result of the Covid-19 pandemic. The latest ExportPlanning data show that, over 2020, global demand for soybeans went through double-digit year-over-year declines in the first two quarters of the year, respectively contracting by 12% in Q1 and 17% in Q2; nonetheless, it bounced back strongly in the second half of the year. Global trade values in Q4-2020 are now estimated to be almost back to a high last reached in Q4-2016. This is partly explained by China’s purchases of US soy, which went from nearly $3 billion in 2020-Q3 up to $8 billion in 2020-Q4.

Soybean exports have seemingly not suffered much because of the pandemic and they are likely to continue their positive growth trend. Morevoer, booming external demand is matched with a strong internal one. USDA analysts have in fact recently revised upwards both export and import forecasts for marketing year 2020/2021. That is also due to unexpected harvesting delays in Brazil, which is prompting main global importers (led by China) to rely on US shipments for longer than usual.
Strong demand pressures, together with some struggles on the side of supply, are also reflecting on the dynamics of prices: soybeans price has increased by almost 60% since last June. As you can see from the graph below, soybeans quoted at the Chicago Mercantile Exchange are now at their highest level since 2014.


Soybeans may keep US agricultural exports afloat for some time to come. According to analysts, China is in fact likely to accelerate soybean purchases in 2021. Trans-Pacific relations therefore assume even greater importance to properly analyze the dynamics of US foreign trade.