The Constant Growth of Dairy Exports

Driven by Chinese demand, foreign sales of US dairy products grow for the fourth consecutive year

As reported in a previous article article, necessary goods proved quite resilient during the pandemic year. Within this group, special attention should be paid to US exports of dairy products that, during the last year, confirmed the positive performance recorded in 2019 ( +11% in 2019 and +10% in 2020, year-over-year).

Historical Trends: the Growth of US Dairy International Reach

As can be seen from the chart below, US dairy exports have grown significantly since the mid-2000s, managing to more than quadruple to date. In the previous period the United States was a net importer of dairy products, with occasional periods of remarkable exports, often subsidized by the US government.

The rapid increase in US dairy exports has been primarily due to the interaction of two events. On the one hand, rising incomes in East and Southeast Asian countries - which, as we shall see, are among the industry's main destination countries - led to increased demand for dairy products. On the other hand, China's entry into international trade upon joining the WTO in 2001, has paved the way for one of the world's largest markets for dairy products.

The growth trend of US dairy exports over the last 15 years has nonetheless met some setbacks. After reaching their highest levels in 2014, US dairy exports collapsed to $3.7 billion in 2015; however, the balance of trade of the sector remained in surplus. According to to the annual report of the United States Departmentof Agriculture, this fall was due to a weak global demand, as well as the appreciation of the US dollar against other currencies recorded in 2015, which made US dairy exports less competitive on the global scene.
As of 2017, exports began to grow again, reaching $5 billions in 2020, the highest level since 2014.

The following graph illustates the main importing countries for US dairy products, showing values recorded from 2017 to 2020. As can be seen from the chart, Mexico represented the largest market for US dairy products, totaling $1.3 billion in 2020, slightly down from 2019 ($1.4 billion).
Since 1994, the North American Free Trade Agreement (NAFTA) granted the United States privileged access to the Mexican market; the shift to the United States-Mexico-Canada Agreement (USMCA) confirmed the absence of tariffs for food and agricultural products already exempted in the previous agreement. Despite the shock brought about by the outbreak of pandemic crisis, Mexico continues to be the leading market for US dairy products. 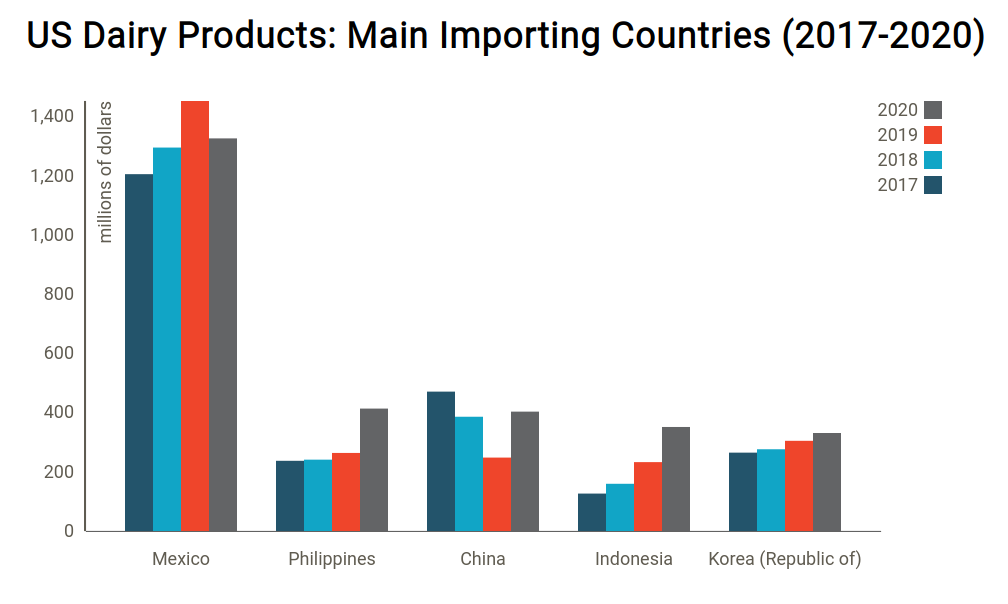 As previously mentioned, the other main importing countries for US dairy products belong to the areas of East and South-East Asia, namely Philippines, China, Indonesia and South Korea. Particularly remarkable is the rebound of Chinese imports, which drove the growth in US exports recorded last year, increasing by $155 million. Also Philippines and Indonesia, albeit less intensively, increased their dairy imports from the US during the last year, respectively by $150 and $119 million, overtaking South Korea in the ranking of top five importing countries of US dairy.

Chinese imports rebounded after plummeting to $248 million in 2019 – fall which was largely due to the outbreak of African Swine Fever, which decimated the Chinese pig herd. Indeed, dry dairy ingredients are staples for weaning from breast milk in piglets.
The rebound of US dairy exports, which are among the products covered by the “Phase One Deal” agreement with China, confirms the comparatively positive perfomance of agricultural exports compared to the other categories covered by the deal: indeed, they went close to fulfill export-related targets1.

Dairy Products: Ups and Downs in 2020

The chart below is useful to analyze the performance of US dairy exports in 2020 from a product perspective, reporting the year-over-year rate of change of the different products belonging to the segment.

While total dairy exports signal growth over the last year, the situation among the different products is nonetheless mixed. Several items (e.g. Sweetened milk powder, Milkfat, Milk and cream, concentrated, Fresh milk: less than 1% fat) fell dramatically; particulary sharp is the collapse of Sweetened milk powder, which recorded a contraction of 69% YoY.
On the other hand, Vitamins and other natural milk constituents, Milk powder: less than 1% fat2 and Grated cheeses or powder of all types showed a greater resilience during the year, respectively growing by 27%, 23% and 17% YoY.

How does the US compare with other main global competitors on the dairy market? The following graph illustrates the market shares held by the main exporting countries, from 2011 to 2020. 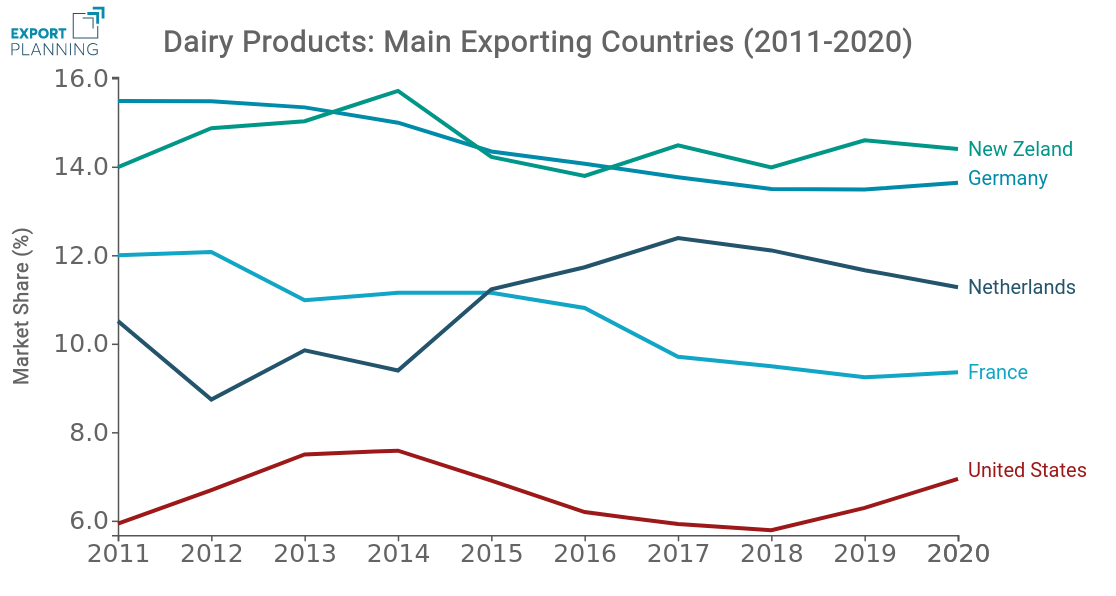 As can be seen from the graph, the United States currently rank fifth, with a market share of 7% in 2020. The largest exporter of the segment is New Zeland, which overtook Germany as leading exporter in 2016 and owned 14% of market share in 2020. Just before the US, we can find the Netherlands (11%) and France (9.4%).

Data show that US dairy companies, as producers and exporters, overall own the potential to become major players on the international scene, but they will have to compete with other key players such as New Zealand and Western EU to increase their market share in the future.
According to the International Dairy Foods Association, just two decades ago US dairy was almost completely a domestic market; the last 20 years have therefore marked a great leap forward in terms of internationalization. Now more than 95% of potential customers live outside the United States; maintaining and expanding access to international markets, namely Asian ones that are showing great potential, therefore seems essential for the future of the industry.

1. For a focus on the theme, see the article “US-China Phase One Deal: Tracking Progress in 2020”.
2. Milk powder is one of the most important products of specialization of American dairy exports and it represented 39% of total US dairy foreign sales in 2020.