Challenges of the US Automotive Industry

As a matter of fact, the United States is a landmark in the field of automotive industry and its related technological development. Indeed, the industry is included in the top categories of American exports and it represented 20% of total US exports in 2019. In addition, the US are the major players on the international scene, holding the 17% of market shares in 2019, placing, with a sharp detachment, in front of other top players such as China and Germany. According to American Automakers AACP the investments for the technological development of the field is huge: it is estimated that every year US car manufacturers and their suppliers spend about $ 130 billion in R&D, behind only pharmaceuticals and technology hardware.

Despite the renowned US strength in the field of Automotive, one year after the outbreak of pandemic crisis, this sector continues to experience a significant downturn, as we reported in a previous article. Actually, Automotive sector was already experiencing a global setback due to both the uncertain international trade climate, which does not encourage long-term investment, and structural transformation within the sector. These changes respond to more stringent emissions regulations and the growing attention of companies, legislators and end buyers to environmental issues.

In this context, the analysis of registration data of passenger cars from the last three years allows us to observe how this structural transformation is impacting auto sales1. 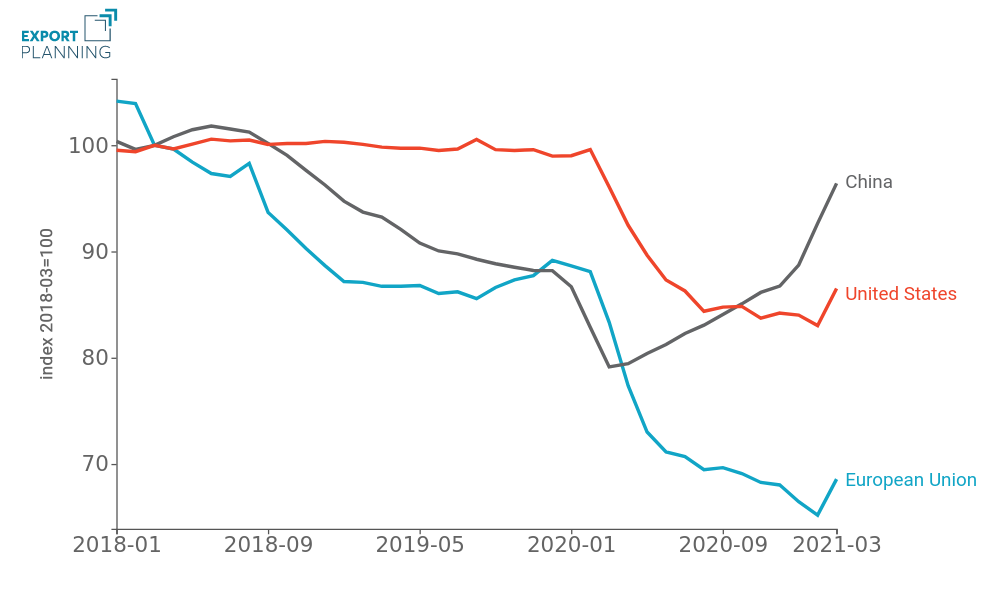 As can we see from the chart, in United States and European Union decreases in sales or stagnation prevail, with a weak upturn in March 2021, which gives hope for a next recovery. China is bucking the trend, as of February 2020 the Country is experiencing an upward trend in car sales, in line with the overall economic growth recorded during last year.

International conjuncture: grow the demand for E-vehicles and batteries

In the following map the several segments of the Automotive industry are placed according to rate of change recorded in Q1-2021 compared to the first quarter 2019 in US exports (on Y-axis) and in the Global demand (on X-axis). The size of each ball is proportional to 2019 American exports value. In this way, it is possible to compare the collapse of the US industry to the global average demand.

By positioning the mouse on the circle, a table summarizing data related to the selected industry will be displayed
Source: ExportPlanning elaborations.

The graph above signals an overall weak performance of US Automotive exports, placing them nearby or behind the yellow bisector - which separates the under-performing from the outperforming industries compared to the world average. Particularly positive is the globally performance of E-Vehicles (F3.11E in the graph2), which opened 2021 with an almost 110% growth rate compared to the value of 2019-Q1. Indeed, one of the main transformation in the automotive industry is the gradual switch to electric vehicles (EV), in order to fight pollution, climate change, and tackle the problem of fossil fuels scarcity. US E-vehicles exports flows also grew significantly, reaching more than $3.2 billion worth (+25% compared to the same period of 2019).

In line with the growing demand for EV, particularly remarkable is the leap forward of US Batteries and Accumulators (D3.14) foreign sales, growing by 45% in the last quarter.

In light of the challenges affecting the auto industry, which are the trasformation from the supply chain side?

The transition from NAFTA to the United States-Mexico-Canada new Agreement (USMCA), signed by Trump in October 2018, has led to several changes in the automotive field. The new deal sets out that automakers must produce at least 75% of the car's components in Canada, Mexico or the United States,- whereas, with NAFTA was to 62.5%, in order to facilitate trade within the area. In addition, it is stipulated that at least 30% of the car must be made by workers earning at least $16 an hour, rising to 40% in 2023, increasing labor costs.

Notwithstanding, trade data indicate that even intra USMCA area the exchanges have suffered a heavy downturn during the last year, with a slightly better performance of the Extra-USMCA area exchanges in the last three quarters (see chart above).

However, given the weight of trade within the USMCA area (steady between 40 and 43% over the last 10 years) and the direction of current trade policies provide the preconditions for a phenomenon of regionalisation of global value chains in the automotive industry.

In a context of overall unfavorable demand, US automotive exports have certainly been penalized by reacting to the impact of the pandemic worse than the world average. Given the growing interest in environmental sustainability, the automotive industry is likely to find the impetus for recovery in this field. Against this backdrop, the Biden administration's decision to rejoin the Paris Climate Agreement, in contrast to the previous administration's decision, is not surprising. However, there are still some barriers to the complete development of the E-vehicles in today market due to high production costs incurred by companies, scarce presence of charging station in several areas and limited battery life. The next few months will be crucial to see how companies in the industry choose to meet the challenges imposed by the crisis.

1.Data on passenger cars registration were gathered European Automobile Manufacturers Association (ACEA) for European Union area and Marklines website for US and China.
2.Within the Exportplanning website E-vehicles are classified with the code UL870390.