Who is Gaining from US-China Trade War?

Which countries substitute Chinese products in the US market?

From the last quarter of 2018, American imports of Chinese goods began to decrease as the US-China trade war situation exacerbated. The trend worsened in recent months, leading to a more than 10% fall in imports during the first half of 2019. 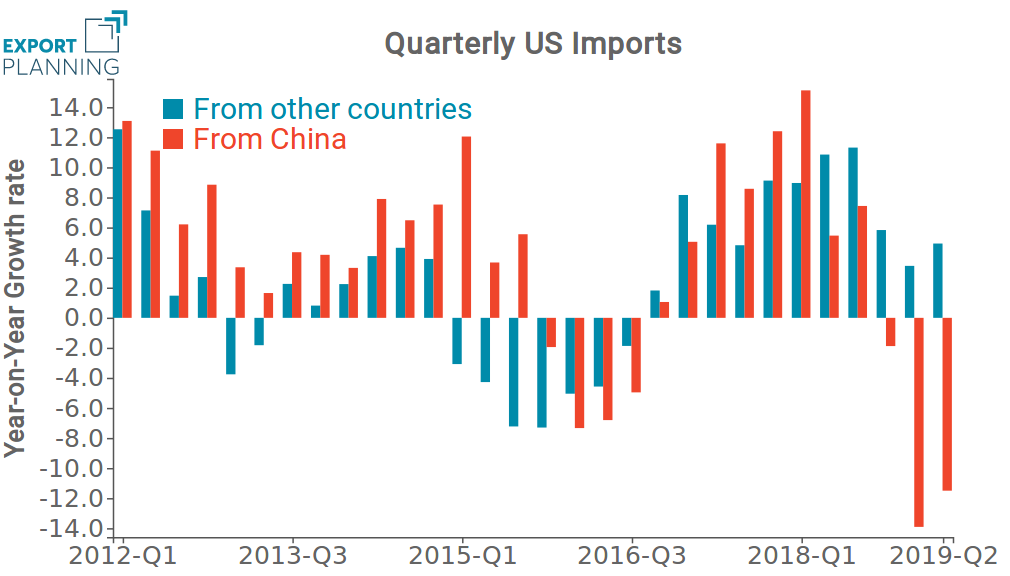 The Figure below shows the main US trading partners, positioned according to the growth rate of US imports in 2018 (x axis) and in the first half of 2019 (y axis). The size of the 'ball' is proportional to the value of exports to the US market in 2018.


The countries that benefitted the most in this situation are: the Netherlands, Belgium and France among developed countries; and Taiwan, Vietnam and India among Emerging countries.

Among the emerging countries, Taiwan and Vietnam substituted China in export of entry-level goods to the US. In particular, the main products were Computers and Computer accessories, Communication equipment, Clothing and Shoes. This substitution led to a growth rate in Taiwanese imports of 20% in the first half of 2019, accelerating from the 7% growth rate registered in 2018. Vietnamese products experienced an even higher growth surge at 36%.
Indian exports also experienced growth. However, should the recent fractured relationship between USA and India persist, then the first half of 2019 might prove to be an "anomaly", considering the strong likelihood of decreased Indian imports over the coming months.
In developed counties, a leading role is played by the Netherlands, whose exports registered very high growth, consistent with the success of 2018.

Not all the US partners (China excluded), experienced an increase in exports. Venezuela, Iraq and Saudi Arabia show negative growth rates, mostly the result of lower for crude oil. Even imports from Spain suffered a reduction, due to a smaller volume of cars.


US tariffs imposed on Chinese goods worth 250 billion dollars negatively affected the relative trade flows, creating room for an increase of imports from Chinese competitors. From this first analysis, it seems that not only have emerging markets such as Taiwan, Vietnam and India benefitted from the tariffs on Chinese goods, but also developed nations like the Netherlands, Belgium and France. However, this is a first working hypothesis that needs further investigation at a product level to be fully understood.