Significant growths of Vietnam's and Malaysia's exports of Furniture; positive results for Polish exports of Lighting

In the first three months of 2020, global demand for furnishing products showed a deterioration, albeit relatively limited, which is likely to intensify in the second quarter of the year. However, it should be noted that export performance varies a lot between the several competing countries, indicating a rapidly evolving competitive context.
This article documents the dynamics of global demand and the performances of the main worldwide exporting countries, regarding the Furniture and Lighting segments.

After reaching a record in seasonally adjusted values in euro in the last quarter of 2019, the first three months of the year have shown a relatively small reduction in Furniture1's world trade, quantifiable in approximately 2 percentage points. 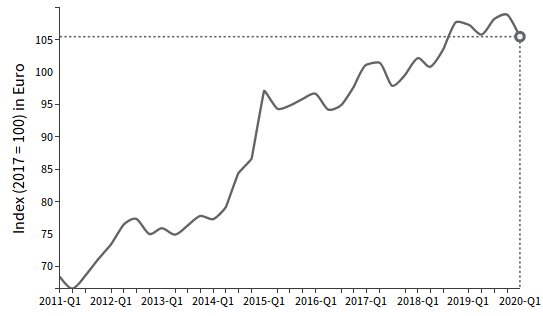 In a context of deteriorating demand, however, there are (even very) significant differences in the performance of the main furniture exporting countries, with a shift in the competitive structure of Asian competitors.

In the first quarter of the year, given the weak export performance of Poland, Italy, and the United States and the steady results of German furniture exports, the sharp drop in Chinese exports (-21.1% YoY in euro in Q1-2020) should be noted. The contraction in Chinese sales greatly benefits exports from Vietnam (+30.8%) and, above all, Malaysia (+47.3%).

Furniture: Performances of Top Worldwide Competitors in the 1st Quarter 2020

However, there is an important difference between the export performances of Vietnam and Malaysia to point out. In the case of Vietnamese exports, long-term growth took place: Vietnamese furniture exports have increased - almost uninterruptedly - throughout the last decade, at an average annual rate of +20% in euro3.
In the case of the Malaysian exports, instead, their recent acceleration seems to be strongly related to a "substitution phenomenon" of Chinese exports, penalized by the protectionist policies of the Trump Administration on the US market. If we observe the dynamics of the last decade, Malaysian furniture exports have remained substantially stable4, but in the last 4 quarters - in correspondence with the beginning of the "trade war" between the USA and China - Malaysian exports have started to increase at a +33% YoY rate in euro (against a corresponding YoY decrease in Chinese sales close to 13%).

In the Lighting technology segment5, world demand was substantially stable during 2019, then fell back in the first three months of 2020 by around 5.4% YoY. 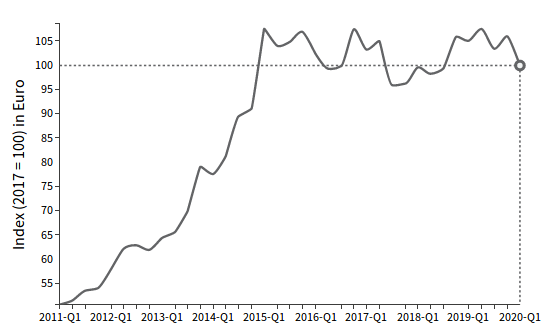 Given China's decline in sales (-6.8% YoY in the last quarter in euro), Germany (-7.7%), United States (-7.7%) and, above all, the Netherlands and Italy (down by more than 11%), we note the positive countertrend performances of Mexico and, especially, Poland (+5.2%), which - although slowing down - confirms the expansion phase of its exports in the Lighting segment.

In particular, Poland moved up to sixth place in the world ranking of major exporters of the segment5, thanks to an acceleration since the middle of the last decade and a particularly dynamic trend (with double-digit growth rates in euros) even in the last quarters.

The fall in world trade in the first quarter of the year6 also had an impact on the furnishing sector, which - especially in the Lighting segment - recorded a downward trend in demand.
However, the very differentiated performances of the main competing countries tend to signal a rapidly changing competitive environment. Especially in a phase of strong turbulence such as the current one, it may be very valuable to constantly monitor markets and competitors7.