Hopes for an Agreement Support the Euro

In the week now drawing to a close, the euro has shown a slight but significant strengthening, which has not escaped the radar of financial observers. Looking at the effective exchange rate, since the beginning of this week the euro has gained nearly one percentage point.
As can be seen from the chart below, the euro strengthened during the Covid shock phase on financial markets, and then stabilised. Since about the end of May, due in part to the weakening of the dollar, the single currency has entered a new phase of strengthening, which has shown an acceleration over the past week.

What are the reasons for this dynamics? Looking at the economic and financial events of the last week, two of them catch the attention: the European Central Bank July monetary policy meeting, held on July 16, and the Special European Council meeting, currently underway, called to discuss the Recovery Fund, "the recovery plan to respond to the COVID-19 crisis", and a new long-term EU budget.

With regard to monetary policy decisions, the European Central Bank did not show any significant changes in its stance compared to the June meeting. The PEPP (Pandemic Emergency Purchase Programme) has been confirmed, with a total budget of EUR 1350 billion; interest rates on the main refinancing operations, the marginal lending facility and deposit facility remain unchanged. The ECB's statements have therefore exerted no particular influence on the recent dynamics of the single currency.

The ECB's decisions were, as usual, based on information on the state of the EU economy. On the basis of the information received after the June monetary policy meeting, the central bank acknowledged that the economy, after the fall recorded in March and April, has been rebounding since May, "although the level of activity remains well below the levels prevailing before the coronavirus (COVID-19) pandemic and the outlook remains highly uncertain". Economic indicators point to a trough in April and the start of a recovery phase, although "uneven and partial", from the following month, thanks to the relaxation of restrictive measures to contain the virus. In particular, the industrial production index for the Eurozone shows a rebound of more than 12% in May MoM, although contracting by about 20 percentage points compared to May 2019. In June, moreover, the euro area witnessed a slight recovery in inflation, which rose from +0.1% in May to +0.3% - a very low figure compared to +1.3% in June 2019.
Retail sales also confirm a recovery, with a 17.8% change in May MoM, a recovery that does not fully compensate for the fall in March and April. On the other hand, unemployment was still on the rise in May (+7.4%), up from 7.1% in March. 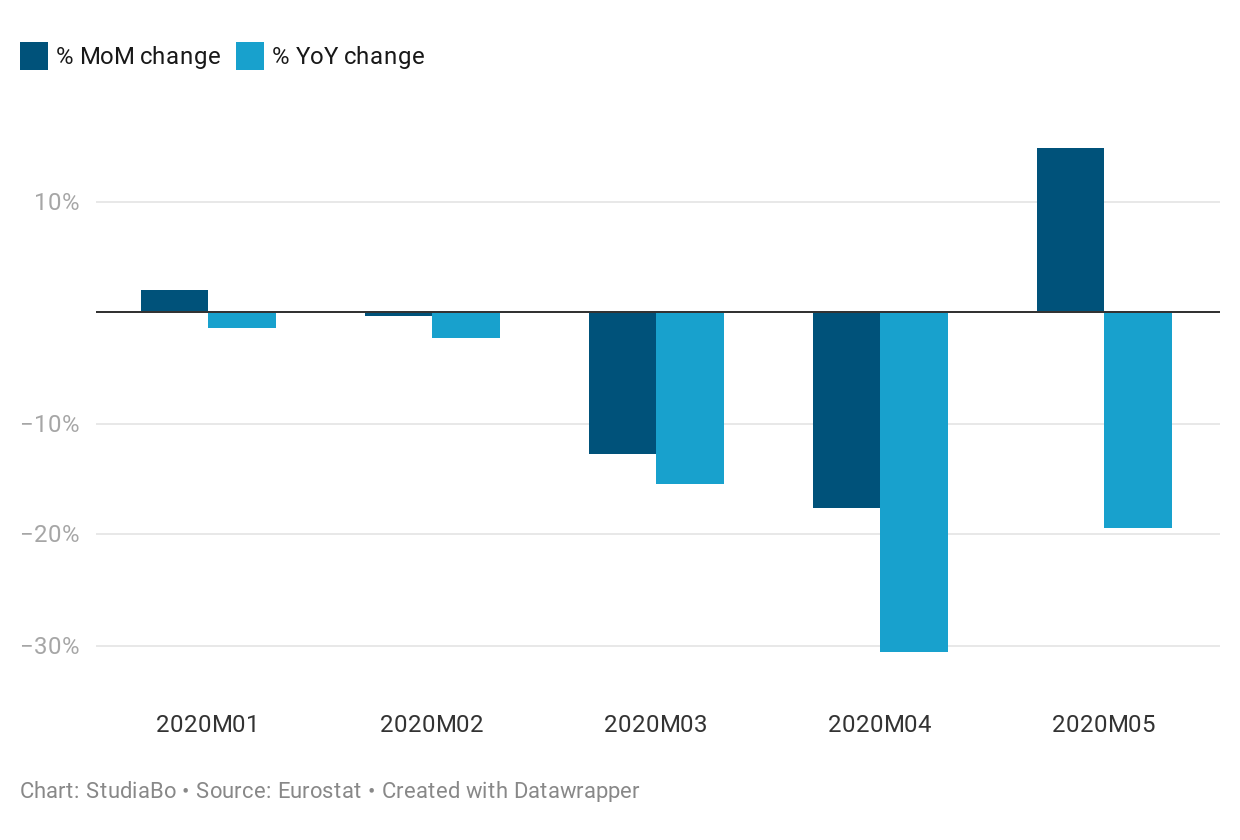 Analysts expect the European Central Bank to remain in wait-and-see mode for the rest of the summer, so the euro should not be particularly affected by its short-term decisions.
This week, expectations ahead of the EU summit are thought to have had the greatest impact on the dynamics of the single currency. The meeting, which began today, will continue on Saturday, with negotiations on the Recovery Fund (also known as Next Generation EU) as a key issue. The cautious optimism of the markets about this event, linked to the possibility of reaching an agreement or at least approaching it over the weekend, is presumed to have influenced the strengthening of the euro observed this week. Looking at the euro-dollar exchange rate, in the last few days it has gone from 1.13 to 1.14.
Reaching an agreement, even if only partial, is not a conclusion that can be taken for granted; however, a certain optimism remains on the markets, thanks to the support of the European Central Bank and Germany, and despite the divergent positions of the "Frugal Four" (Austria, Denmark, Netherlands and Sweden). The hope of the markets is that reaching an agreement could limit the damage to EU economies resulting from the pandemic; it would also mark a step forward in terms of European integration. This would reduce the risk associated with the euro, increasing its chances of strengthening against the greenback.