In the financial markets world, the event of the week was undoubtedly the Federal Open Market Committee (FOMC) meeting of the FED, held between June 15 and 17. During Wednesday's reunion, the Federal Reserve considerably increased its estimates for the growth of US GDP and inflation, leaving the door open to a possible increase in benchmark interest rates earlier than expected, i.e. in 2023 instead of 2024.
Currently, the FED's monetary policy continues to be accommodative, keeping interest rates steady between 0 and 0.25, supported by the bank's huge monthly purchases of 120 billion dollars divided into 80 billion in treasury bills and 40 billion in asset backed securities. However, consumer price growth is also starting to worry the central bank: if, in fact, until the other day inflation growth was perceived as cyclical, the projections released on Wednesday for this year's inflation were again revised upwards to 3.4%.
If on the one side the number one of the Fed, Jerome Powell, reassured the markets that the orientation of the monetary policy remains unchanged, on the other side he warned that if the rise in inflation or long-term expectations should prove to be permanent, then the central bank will be ready to change course by anticipating the phase of securities selling (tapering).

The projections for the US economy: sustained growth in 2021

The US growth projections released at this week's meeting were all revised upward. Estimates for GDP growth this year rose from 6.5% in March to 7.1%, while unemployment is projected at 4.5% for this year to 3.8% next to 3.5% in 2023.
In general, data suggest that the United States is ahead of other Western countries on the post-pandemic recovery path, and it is therefore normal for it to get an early start on the exit strategy.

The markets' response: Dollar vs. Euro

As noted in the chart below, after Powell's statements on Wednesday, the response of international observers was swift, "rushing" to buy the greenback. In fact, the dollar-euro exchange rate went from 1.21 to 1.19, appreciating by 2% in the two days of Thursday and Friday. 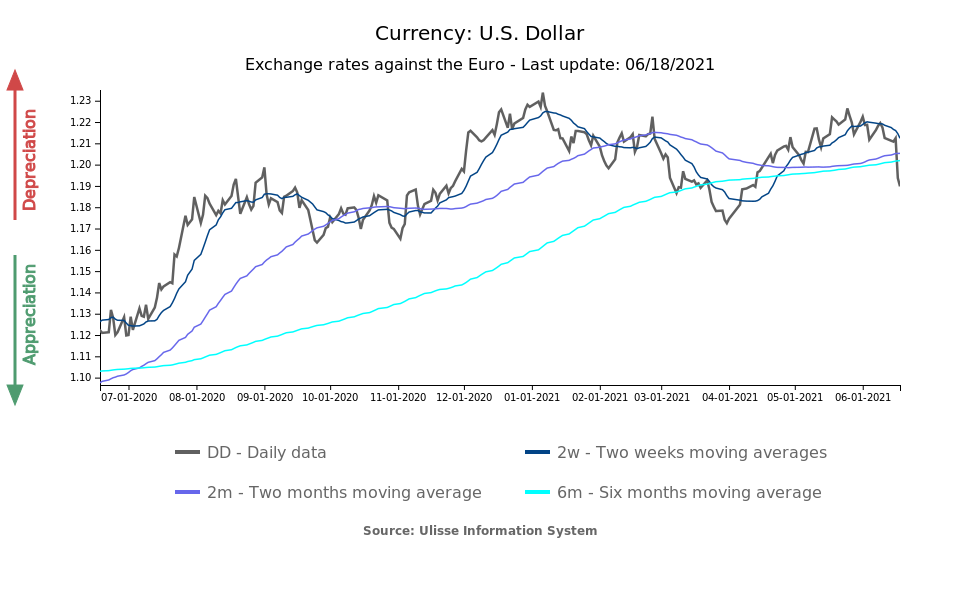 While on the one hand the American currency seems to be positively influenced by the performance of the local economy, on the other hand it must be taken into account that the stock market movements seem more susceptible to the hypothesis of a future tapering.

Between Tuesday and Thursday, in fact, the Dow Jones fell 1.6 percentage points while the Standard & Poor 500 remained more stable, with a moderate decline to 0.8%. As in 2013, when the FED announced a tightening of liquidity injections, the markets' response was abrupt, causing a sudden increase in 10-year interest rates. In this context, analysts expect an increase in volatility of the U.S. stock markets in the coming months.
In any case, in the long run, the appreciation of the dollar opens a window of opportunity for EU companies, creating more favorable conditions for exports.