The update of European countries' foreign trade statistics with the October 2021 figure allows us to outline the economic profile of EU exports. On the eve of the two-year period since the start of the pandemic emergency, the health situation is improving, thanks to the vaccination campaigns, but it is not completely risk-free.

Within a context of a general slowdown of world trade, see article Growth in World Trade of Manufactured Goods Shows Signs of Easing for more details, the latest data confirms a reduction in the speed of recovery also for European exports. The graph below shows the 3-term-moving average of European foreign sales for intra-EU and extra-EU countries, fixing the 2019 average equal to 100. 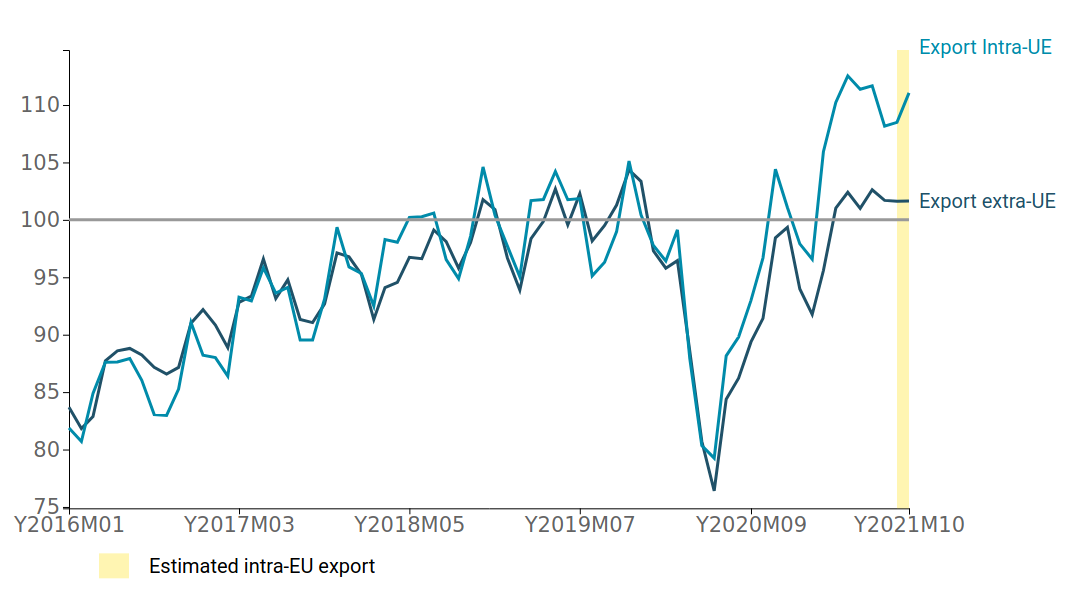 It is clear that, in the first months of the new year, European exports recovered and exceeded the pre-crisis levels, with a strong increase in sales to the EU market, only to then give way to a phase of relative stabilisation. Since the summer months, in line with the international economy, the pace of growth has normalised. However, although decelerating compared to previous months, European exports are still higher than pre-crisis levels.
Given this picture, in sectoral terms, the slowdown appears rather generalised. In particular, the following graphs reproduce the foreign sales of the main European specialisation sectors, categorised by consumer and investment goods. 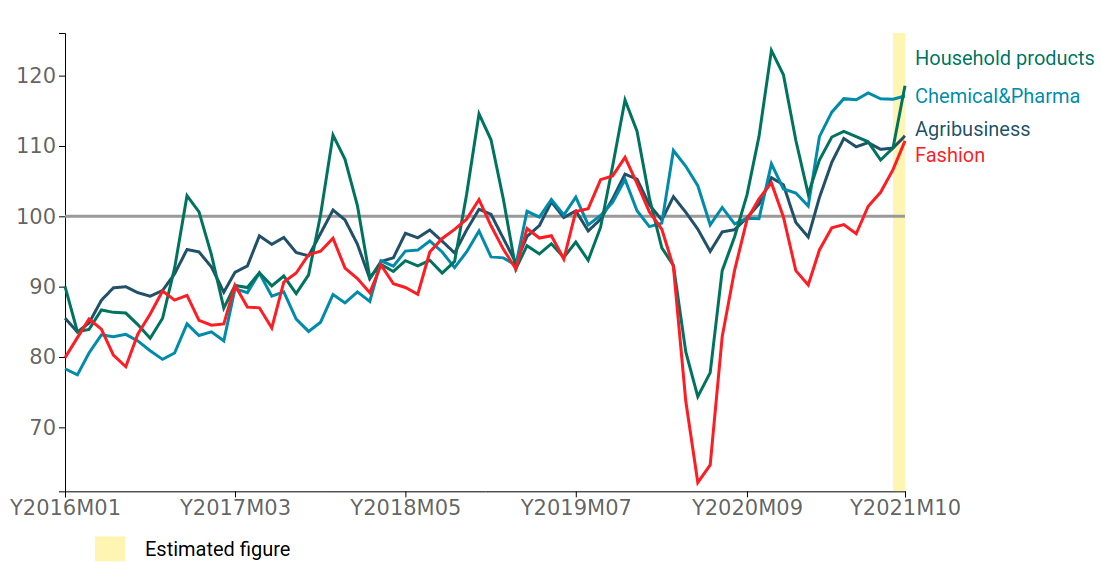 On the consumer goods front, the picture is relatively positive, with all the main specialisation sectors recording levels higher than pre-crisis levels. However, the slowdown in growth was particularly evident in the Agri-Food, Chemicals & Pharma and, to a lesser extent, the Home System sectors, taking into account the seasonal peaks recorded at the end of the year. Particularly significant is the figure for foreign sales of the Fashion System-Personnel, which, starting in the summer months of the new year, seems to have begun the process of recovering pre-crisis levels.

For capital goods, the situation appears more differentiated, mainly due to the strong deterioration of exports in the automotive sector, which weighs on the overall EU performance given the importance of the sector for EU industry.

In view of this, the outlook for the last quarter of the year looks less bright than the strong expansionary trend of the past months. However, it is fair to look to the near future with cautious optimism, as sales continue to remain above pre-crisis levels. Among the sectors of greatest European specialisation, there is concern about the sharp deterioration in the outlook for the automotive sector, which seems to be heavily affected by current inefficiencies in supply chains.