The availability of ExportPlanning pre-estimates on the second quarter of 2022 of foreign trade data of EU countries - accessible through the EU Countries Conjuncture datamart - allows us to document the economic situation of Old Continent exports and provides an initial overview of the current economic situation.

After a still positive first quarter 2022, the second quarter was characterized by a gradual slowdown, caused primarily by the aftermath of the outbreak of war in Ukraine, but also by continuing inefficiencies along global value chains and rising commodity prices. 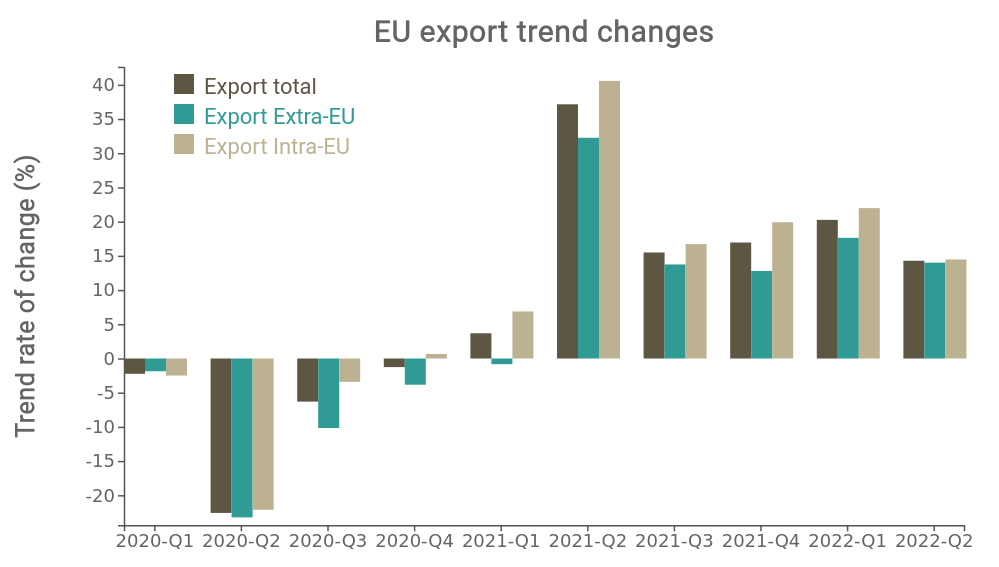 Clear from the graph shown is the strong economic recovery that has characterized the European Union since the second quarter of 2021, rebounding substantially from the pandemic period. The positive trend then continued for the following months, gradually rising to +20% trend in the first quarter of 2022. This result is mainly the result of Intra-EU exports, as inefficiencies along global value chains would seem to have penalized long-distance destinations the most.
The second quarter 2022, on the other hand, shows the first signs of a predictable slowdown. However, the values recorded are still in positive territory compared to last year (+14%), but at the same time the consequences of the conflict between Russia and Ukraine are tangible.

Analyzing the main destination markets of EU exports, as shown in the graph below, the dynamics of exports to the main geographical macro-areas appears very differentiated between the East and the West of the world.

On the diametrically opposite front are the results marked toward Africa and the Middle East and, above all, toward the American continent. In fact, the latter in recent months represents the main driver of EU exports, both in the direction of North America (the United States and Canada) and South America (Venezuela, Peru, Brazil and Argentina).

Positioning the mouse on the circle that identifies an industry, it is possible to visualize
a table that summarizes the data related to the selected industry

The exponential increase in prices of most commodities inevitably leads them to position themselves in the upper right part of the chart, with positive changes over 2021 of 35% for natural commodities (A1) and 44% for industrial commodities (A2); when compared with 2019 they exceed 50%. The performance of health products and instruments (E4) and consumer goods in general continues to be excellent, while capital goods are characterized by a slower recovery. In particular, transportation equipment (F3) and related components (D3) continue to have negative changes.

The examination that has just been carried out shows signs of a first significant slowdown in European exports, however, it is clear that the results under analysis are strongly affected by the dynamics of average unit values, which reflect the price increases recorded over the past few months.
The recent publication of ExportPlanning's World Conjuncture datamart will allow us to delve into this aspect as well.