The potential of SMEs in US foreign trade

Althought the majority of US exporting companies are SMEs, in terms of exports values large companies dominate international trade

A task that Biden administration will need to face concerns the American trade deficit, which is the result of a positive balance on the side of services side and a strong deficit in terms of goods (for a focus on the topic, see the previous article: "A Tough Year for US Exports: Trade Trends and Effects on Current Account").
The policy implemented by the previous administration tried to bring the goods balance back into equilibrium by acting mainly on the containment of imports (see increase in tariffs). It is likely that the new administration will radically change its approach, for two reasons: firstly, the previous strategy has brought only small benefits; secondly, the return to a multilateral approach, where balance is sought in competition on open international markets, is not compatible with this strategy.

In this context, it might be useful to analyze the forces in play and what support actions could be aimed at achieving the results of export growth.

The latest report released by the Census Bureau about the “Profile of U.S. Importing and Exporting Companies, 2016” delivers a detailed picture of the contribution to international trade by different-sized companies. The table below summarizes its findings. 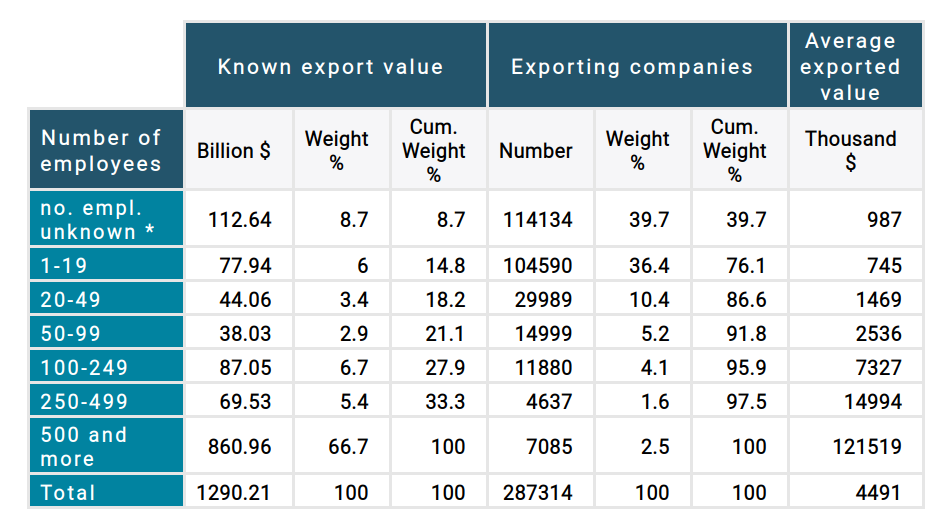 * Includes missing employment data, nonemployers and companies that reported annual payroll but did not report any employees on their payroll during 2016.

US Census Bureau data suggest that the majority of US exporting companies are SMEs1; nonethless, in terms of exports values, large companies (500 and more employees) dominate international trade. In 2016, US Large companies exports were far higher than the other five size classes, accounting for over two-thirds of the total known export value. In contrast, the export weights of the other classes did not exceed the 10% threshold. In the macro group of SMEs, the class 100-249 employees emerges as the largest exporter in 2016, recording approximately $87 billion worth of exports.

SMEs face the same barriers as their large competitors, but they have fewer resources to face them, both in terms of human resources and capital; it is therefore relatively more costly and risky for SMEs to invest in trade opportunities.

To complete our analysis, it might be relevant to compare the structure emerged for the case of the US with the situation of other major international partners.
The following bar chart illustrates the levels of exports of major OECD countries in 2016, clustering the data in three groups, according to business sizes: less than 49 employees, between 50 and 249 employees and more than 250 employees. The information was obtained using data from the US Census Bureau for the United States and the OECD2 for the other countries. 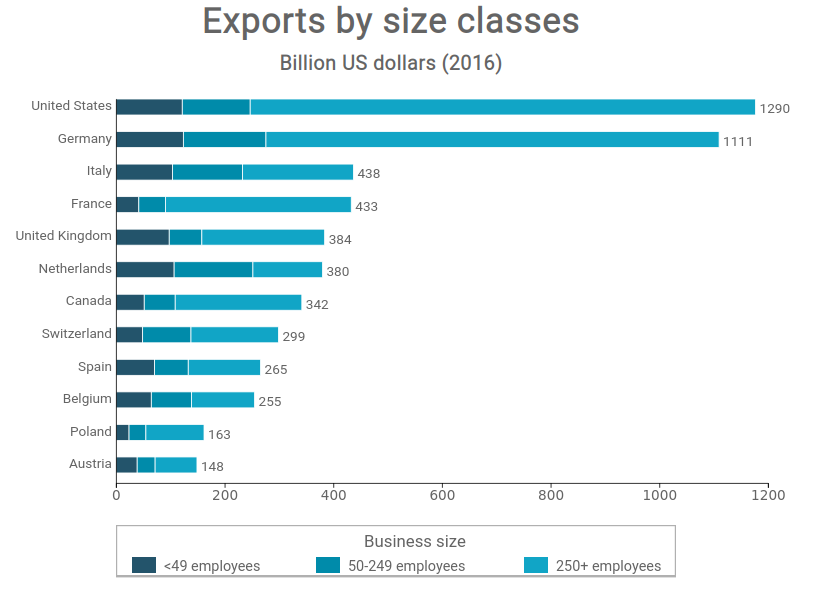 Source: ExportPlanning elaborations on US Census Bureau and OECD data.


As can be seen from the chart, the US and Germany show the highest export levels, respectively reaching $1.3 and $1.1 trillion in 2016; for the two countries, exports are clearly more concentrated in the highest size class, accounting for about 72% and 75% of the total.
Also France, the UK and Canada, although with much lower values, show a greater contribution to exports by companies with more than 250 employees, which respectively record 79%, 58% and 68% of the total exports. In countertrend, the Netherlands and Italy appears to be more inhomogeneous among different classes, signaling the active role of small and medium-sized businesses in terms of international trade.

Therefore, given that the export potential of large companies seems to have already been expressed, it is possible that a high pool of potential is hidden in SMEs, whose export share is currently very low. In fact, the Italian and Spanish cases indicate that SMEs might have a strong export potential. Export support policies specifically aimed at smaller companies could therefore produce significant results in terms of increased foreign sales.

Although the full effects of the COVID-19 pandemic are still not utterly known, according to the US Census Bureau Small Business Pulse Survey its economic impact has been particularly tough on small businesses: indeed, 29.6% of all businesses surveyed through the second to last week of February reported being financially impacted by the pandemic.

In a context of overall unfavorable demand, SMEs need extra help to make the most of the trade and investment opportunities.

Thus, any progress in terms of trade facilitation and other regulatory and tariff barriers would be particularly beneficial to SMEs, facilitating access to the international markets. At the same time, it is important for SMEs to be encouraged to embark on internationalization processes based on best practices in organization, planning and the use of specialist skills from outside the company, therefore facilitating comparisons with their larger competitors.