Brexit chaos and weakness in the Eurozone

The pound hasn't been penalized by the latest developments in the Brexit maze.

The main economic theme this week has undoubtedly been Brexit. Last Tuesday, the agreement negotiated with Brussels has been rejected by British Parliament. This hasn’t led to the fall of the government led by Theresa May, which has survived a no-confidence vote the following day.
So, the government remains in office with the hard task to deliver, on Monday, a new Brexit plan that could get parliamentary approval.

In the face of political chaos, the pound hasn’t showed a depreciation dynamics; on the contrary, it has appreciated by 1.6% in the last week, in terms of effective exchange rate (EER), after reaching a 13-month low in the first days of January.
The following graph shows the dynamics of the pound (EER) in the last 6 months; in the final part of the series you can notice the ongoing recovery. 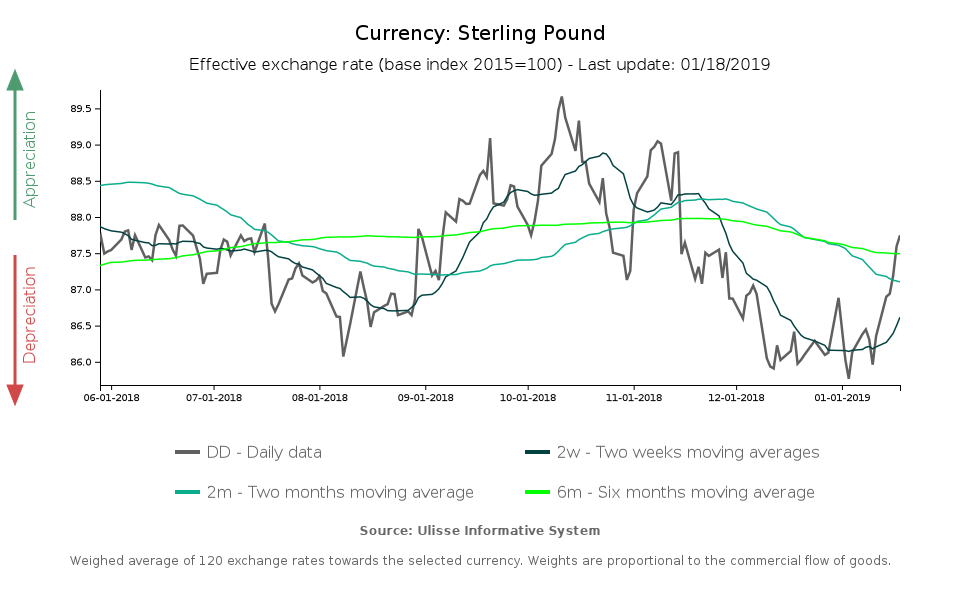 What could explain pound’s appreciation, in an unfavourable context of political chaos and uncertainty about Brexit? There might be many factors at play:

Focusing on the last point, i.e. the weakening of the euro, this seems to reflect the general weakness that affects the Eurozone economy.
On January 11 Eurostat released updated estimates about GDP growth in the EU and in the Eurozone in Q3-2018. The data have been disappointing and confirm that the Eurozone economy is slowing down: even if the growth rates are positive (+1.6% year-on-year, +0.2% quarter-on-quarter), they confirm the slowdown trend started in Q4-2017.
Looking closer, Germany grew 1.2% year-on-year, the lowest rate since Q1-2015, and Italy stopped at 0.7%, the lowest since Q3-2015.

US-China: coming to a close?

On the other side of the ocean economic data look more promising: the US grew 3% year-on-year in Q3-2018.
On the currency front, after a phase of weakening for the dollar started at the end of december, the currency is now recovering, thanks to the signs of a thaw from the US-China front. According to the Wall Street Journal, US Treasury Secretary Mnuchin is carrying out the proposal to partially lift tariffs from China, in order to reach an agreement faster. Anyways, he might face opposition from US Trade Representative Lighthizer.

The escalation of violence does not seem to affect shekel, supported by the confidence that financial markets have in the quality of institutions and the choices of the central bank [ Read all ]

The Canadian dollar is confirmed as a "commodity currency", but is also very sensitive to expectations about Bank of Canada interventions [ Read all ]

How to evaluate the success of a marketing mix

EU Exports of Machinery: signs of recovery in the 1st quarter 2021, but still below pre-crisis levels on average