How to export to the USA: a guide

Us market offers several opportunities for European companies, but it requires a specific know-how.

Despite the forecast of a slowdown in the world economy, the United States proves to be a fast-growing country. Several factors guide the increase of U.S imports such as the recovery of labour market, proof of the fact that something is moving in the right direction.

The negotiations with the Chinese delegation by President Trump are still open and it is possible that a new agreement will be signed with China leading to a solution for tariff war. Moreover, today the United States has not yet imposed particularly unfavorable limitations on imports from Europe. In addition, the tax policy of the Trump government has brought a revenue of 465 billion dollars, without increasing American tax burden.

A final fact confirms that the United States is still a flourishing territory for imports and investments and it concerns the export of oil. In fact, for the first time in 75 years America has become a net exporter of oil: the data show that U.S. natural gas exports in the period January-June 2018 have doubled compared to 2017.

So, the data support foreign investments in the American economy. In particular, the American market represents a market of primary importance for European companies; after China, in fact, Europe is the second commercial partner of the United States: in 2018 European exports amount to $ 475 billion (StudiaBo estimates). Of this amount, European exports to the US of Food&Beverage amount 21 billion $, within which exports of wine weigh 50%, as shown in the chart below.

Food&Beverage: European export to the U.S. 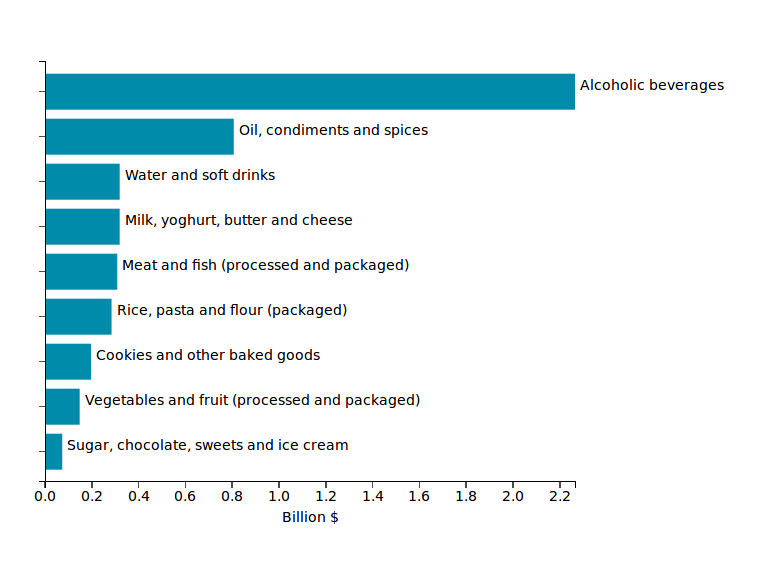 American tariffs on Chinese goods hit even agri-food imports from China, although lesser compared to other sectors. The chart below shows the goods mostly hit by tariff measure of Trump administration.

The American tariffs affect in particular Chinese exports of packaged meat and fish and packaged vegetables and fruit, for which China might reduce the value of its exports. This perspective opens interesting market opportunities for European Food & Beverage companies.
The American market, however, presents significant non-tariff barriers, linked to documents required for export to U.S market in compliance with the American rules and quality standard.

How to: exporting to the USA

Exporting European products to the United States requires the submission of certain documents within 15 days of arrival at the port of unloading, which is necessary both for the release of the goods at customs after examination, and for the calculation of duties. All these documents can be sent via the Automated Broker Interface (ABI). Import documents include:

Once the necessary checks have been carried out, the importer have to submit a summary of the registration documentation and deposit the sum corresponding to the estimate of the duties at the port of unloading. A new feature introduced on 10 March 2016 allows shipments of orders of less than 800 dollars to have no duty and have a simplified customs import procedure in America, for the benefit of e-commerce.

Furthermore, the legislation is rather strict for the export of food goods to the United States. As of September 16th 2016, the "FinalRules" envisaged by the "FoodSafetyModernizationAct" (FSMA) issued by the Food and Drug Administration (FDA), the US agency for food and medicines (valid for both those working in the country and for those who care). To these are added the FDA registration, the appointment of an FDA agent and the obligation of advance notification. In the order, the practice is as follows:

The types of products that require a particular practice are: cheese, meat, pasta, sausages, milk, fruit and vegetables and chestnuts.

It is clear that the American market offers high potential, but it is so complex that might generate significant problems for inexperienced exporting SMEs. The best way to overcome this complexity is to get support from technical experts as consultants.

On June 30, 2022, the European Union and New Zealand concluded the four-year negotiations for an ambitious trade agreement [ Read all ]