US Exports Performance in the First 9 Months of 2019

Trump's protectionism cost on US exports

The American economy has experienced a gradual and significant worsening of its trade balance since the beginning of the century. The deterioration is attributable to the gap opened between import and export flows of goods over the last few years, as shown in the graph below. 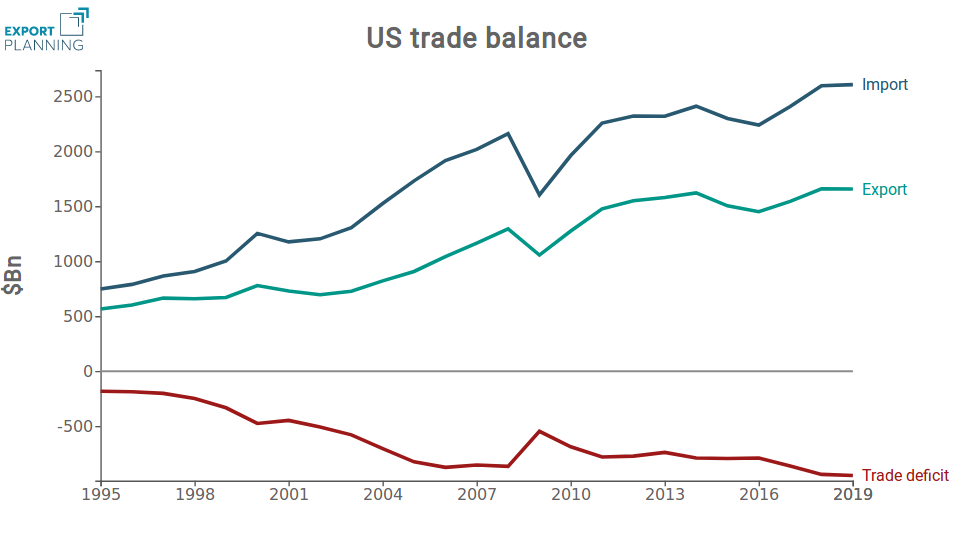 
The rebalancing of the trade deficit has therefore become one of the main objectives on Trump Administration's Trade Policy Agenda, whose protectionist actions seem to have stabilized the dynamics of the US trade deficit in 2019. However, in order to guarantee a trend reversal in the dynamics of the American trade deficit, strengthening American export flows is becoming increasingly strategic. Acting just on the import front, in terms of reductions of the flows, risks to carry limited benefits in terms of trade balance, while threatening the performance of US exports on foreign markets, through the retaliatory actions of trading partners hit by tariff measures.

In 2019 US exports recorded a generalized slowdown, extended to almost all the US industries. The following chart shows US industries according to the year-over-year change recorded in 2018 and in the first nine months of 2019.

For the Raw materials industry, the slowdown in US exports is apparent in particular for Industrial raw materials. The result is mainly affected by the contraction in imports of oil&gas by Canada and Mexico in the first nine months of 2019, due to the intensification of tensions between the 3 trading partners with the approach of the renewal of the NAFTA and consequent delays in the approval of the new USMCA.

In the Intermediate Goods group, the most significant deceleration is reported by Components for transportation. The so called "skies feud" has in fact led to a contraction in American exports of aircraft components, especially to European markets (France, Germany and United Kingdom). Furthermore, slowdowns also appear in the industries of Mechanical and optical components and Electronic components, for which both the slowdown in US exports to the NAFTA area and the the contraction of flows to Asian partners (e.g. Hong Kong, Taiwan, South Korea and Malaysia, of course, China) play a significant role.

In the case of the Capital Goods, there are significant slowdowns both in the industries directly involved in the trade war, such as the Electrotechnics and ICT Equipment, and the Mechanical engineering (Equipment and Industrial Plant Engineering). Also in this case, the most significant slowdowns are recorded not only from US exports to the Chinese market, but also from export flows to Canada and Mexico.
Counter-trend for the Means of transports exports, that do not show signs of slowdown, since the industry had anticipated the slowdown of the current economic situation due to the difficulties of the automotive industry. For US exports, the positive performance of the sector is above all driven by the export of Airplanes; on the contrary, the vehicle export phase continues to be weak.

Consistent with what is evident on the international scene, US exports of healthcare products and tools seem to show the greatest resilience to the current economic situation. On the contrary, US exports of Finished products for the person have been slowing down, due to the slowdown in exports to the Asian markets of Hong Kong and China, and the European markets of United Kingdom and Switzerland.

On the basis of this evidence, all the different protectionist actions of the American administration would seem to have been accompanied by significant costs in terms of national exports. Beyond the Asian front, in fact, American exports have reported negative performances in Canada and Mexico as well, due to growing tensions between NAFTA partners on to the Mexican immigration issue and the tariffs imposed by the US on steel and aluminum, eliminated only in the second half of 2019.
For these reasons, a strategy of strengthening of US exports, in a context of less isolationism, appears to be the main route for a structural rebalancing of the American trade deficit.

Faced with a historic strengthening of the shekel, Israel's central bank announces a significant forex intervention plan [ Read all ]

EU Exports of Machinery to the US: 2020 Trade Figures

Preliminary figures for 2020 highlight the significant downturn (down 24.2% in euros) of the main destination market of EU companies in the sector [ Read all ]

The Trump Administration's Latest Move on Trade and FX Policy

Switzerland and Vietnam have been labelled as "currency manipulators" [ Read all ]