In the last few weeks we have addressed the impact of the Covid-19 epidemic on several EM currencies, finding the recurring issue of the presence of structural economic weaknesses which, added to the effect of the health crisis, have aggravated the outlook of both economies and currencies, and generated in some cases substantial weakenings for the currencies involved (see the cases of Brazil, Mexico, South Africa and Turkey).
This week instead we are going to take a look at Southeast Asia, where the Thai baht definitely represents on the most interesting case studies. The baht has been in the spotlight in recent years because of its significant strengthening trend, which began in early 2017, as can be seen in the chart below showing its bilateral exchange rate with the US dollar. Between the beginning of 2017 and the end of 2019 the Thai currency strengthened by about 14% against the dollar, so much so to be almost considered a new safe-haven, but also to worry national policy makers about the possibility of losing competitiveness on foreign markets.

The start of the epidemic has represented a game changer for the baht, which in just 3 months lost almost 10% of its value against the dollar, reaching highs of 33.02 baht per dollar in early April. Then, with a partial easing of tensions on financial markets, the baht partially recovered ground (+2.8%), remaining nonetheless far from the levels reached at the end of 2019.

Tourism collapse weighs on the currency

The Thai currency was one of the first to be hit by financial markets’ epidemic-related panic, due to its proximity to China; then, when the epidemic turned into a pandemic, it ended up trapped in the sell-off climate that affected most EM assets. A clear reversal of fortune for the currency, since the pandemic threatens some of the key factors that have sustained its strength in recent years, including a positive current account balance, also due to its thriving tourism industry. Latest balance of payments data released by the Central Bank of Thailand for the first 3 months of the year are beginning to confirm these fears, as can be seen from the chart below. 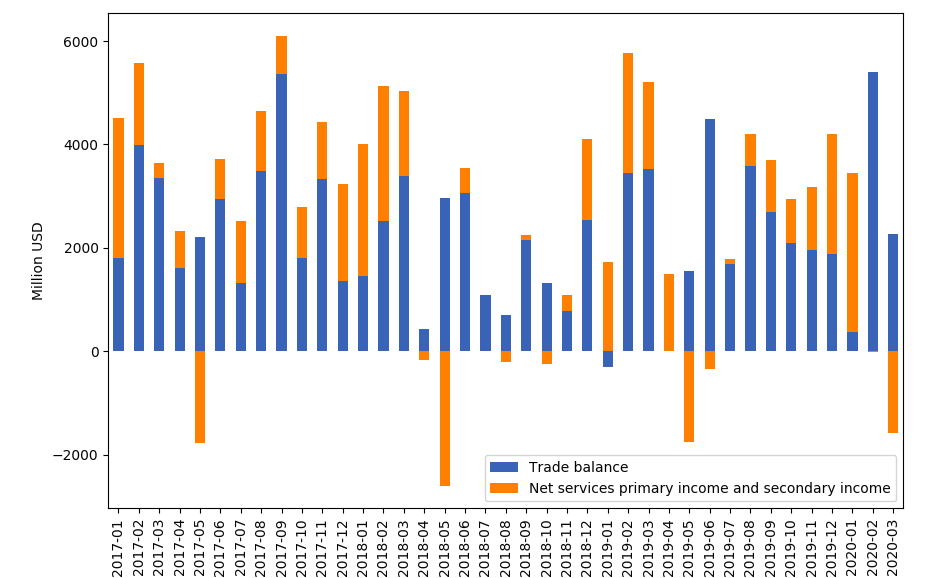 The chart above, which focuses on goods and services within the Thai balance of payments, shows how the surplus in terms of services began to erode as early as February, when it entered negative territory; the trend became more pronounced in March. On the contrary, as far as goods are concerned, a clear surplus can be noticed in February, due to a slight increase in exports but mainly to a contraction on the side of imports. According to most analysts, a growth in exports in the first months of the year can be seen as a transitory phenomenon, due to a concentration of shipments before the lockdown of economic activities, which in Thailand began at the end of March.
For the next few months, on the other hand, Thai exports are expected to enter a phase of greater weakness, linked to the current declining demand on a global scale, as well as a continuation of the weakness of the services sector. Given the factors described, combined with the inevitable slowdown in domestic economic activity, it is clear that the baht is experiencing a phase of weakness, since the currency is lacking its main supporting factors.

Light at the end of the tunnel

In the short term, the outlook for Thailand is therefore negative, in line with forecasts for most countries in the world: inflation is slowing down sharply (-3% YoY in April), indicating a weakening of domestic demand, while in terms of economic growth the IMF forecasts a severe 6.7% contraction in GDP for the current year, which will represent the lowest rate since 1998. Nevertheless, some elements lead to think that the situation of Thailand is less dramatic than the scenario outlined in recent weeks for other emerging countries, suggesting that the Southeast Asian nation might have more room for manoeuvre to face the current crisis.
According to Moody's recent analysis - which at the end of April changed Thailand's outlook from positive to stable, but confirmed the rating at Baa1 - Thailand's public finances are in fact solid enough to withstand the shock of the coronavirus and allow the government to act in order to soften its effects. In fact, the country has low public debt (42% of GDP in 2019) and a deficit-to-GDP ratio close to 0, while its share of foreign currency debt is low. Another element of strength highlighted by Moody's is the diversification of the country's economy, which relies heavily on tourism but also has a developed industry, especially in the automotive and electronics sectors.


Thanks to a very restrictive lockdown, Thailand has achieved very positive results in the management of the health emergency. In the whole month of May, less than 100 cases of contagion were confirmed. The number of total deaths due to Covid-19 since the beginning of the outbreak is also very limited (56).

Thailand is therefore expected to weather the storm with less damage compared to other emerging countries, but surely a real recovery for the country will only be achieved when the epidemic will be over and tourists will be back to Phuket.