As observed in recent months, the health crisis has put emerging markets currencies under severe pressure, mainly due to capital flight towards assets with a lower degree of risk. Among the currencies in the EM cluster that have experienced the sharpest falls, we can find Brazilian real and Mexican peso: since the beginning of the year to date, the former has lost almost 39% of its value against the dollar, ranking as the worst performer among floating EM currencies, while the weakening of the peso against the greenback has exceeded 31%.

Factors weighing on the battered EM currencies are largely common:

Taking a closer look at the currency dynamics of the two major Latin American countries, the situation of the Brazilian real is quite dire: today the currency reached the levels of 5.57 real per dollar, an all-time high. 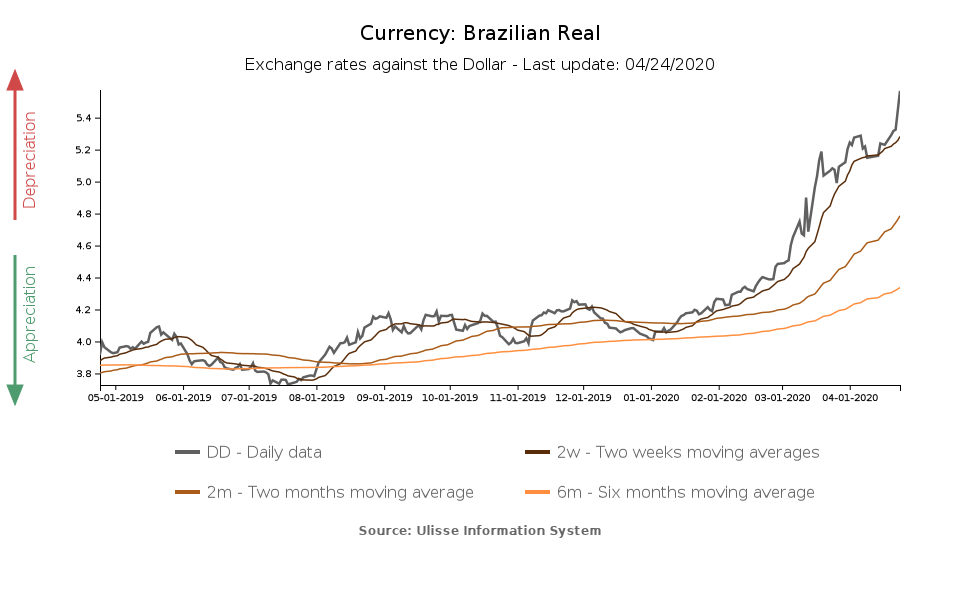 On top of the factors mentioned above, another reason that can explain this weakening trend is the fact that the Brazilian economy, even before the outbreak, was not in great shape; on the contrary, Brazil was still emerging from the 2015-16 crisis and long years of low growth. The Covid crisis and the sell-off that resulted from it have therefore had strong consequences, as recorded by the currency.
While Brazil's public finances had recently been relieved by the new pension system reform, with the outbreak of the health emergency they came under pressure again, due to the need to stimulate the economy. The International Monetary Fund forecasts a 9.3% fiscal deficit in 2020 and a severe GDP contraction (-5.3%). The economic scenario is therefore rapidly deteriorating.

This adds up to political tensions: President Jair Bolsonaro is showing an unorthodox approach in the fight against Covid-19, which is causing clashes within his own government. Last week the health minister was dismissed, given a clear divergence of views on the severity of the virus and the relative need for restrictive measures.
Uncertainty is therefore high, and the government is struggling to take coordinated action to deal with the epidemic: this is beginning to erode the president’s support base.
The most recent episode of political tension happened today, with the resignation of the Justice Minister Sergio Moro, due to disagreements with the President. Moro represented a key element of Bolsonaro's government, for the symbolic value of detachment from the country's past; his departure could therefore weaken the cabinet.

The Mexican peso has been stable against the dollar at a quite weak level for a month now. The currency therefore shows greater stability compared to the real, which keeps on weakening, but at the same time its performance is worse than Asian currencies such as the Thai baht and the Indonesian rupiah which, in April, have been showing signs of recovery. 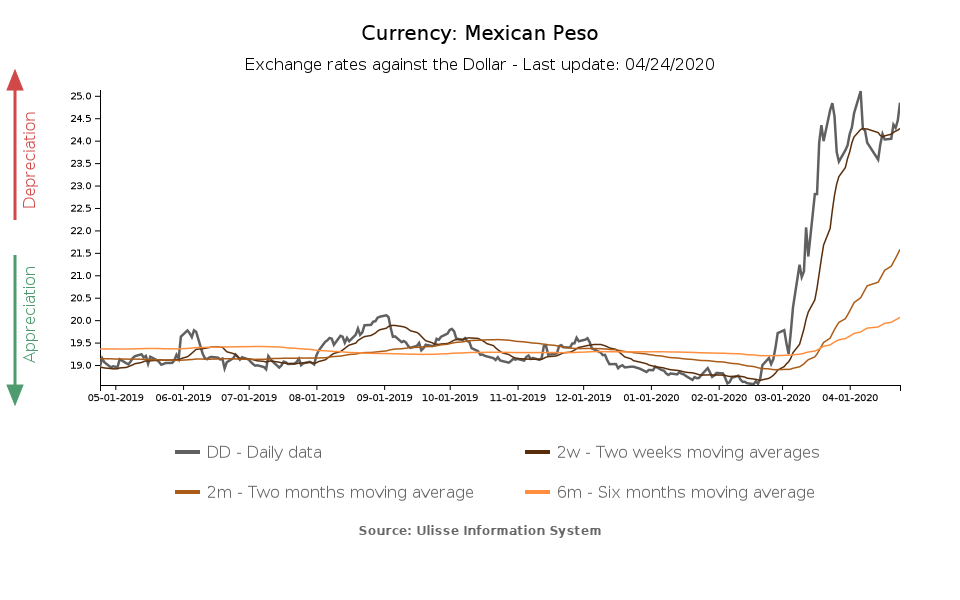 As well as the Brazilian economic situation, the Mexican one is quite precarious. We can confirm the presence of the common factors of difficulty listed above, to which we can add the downgrades received by Mexico from three different rating agencies in the last month. At the end of March, Standard & Poor's downgraded Mexico's sovereign rating to BBB from BBB+, in relation to the Covid-19 shock and the fall in oil prices, which worsened an already modest economic growth situation. In mid-April came Fitch's downgrade (from BBB to BBB-); a few days later Moody's also downgraded Mexico from A3 to Baa1.

The central bank is also signaling of a rapidly worsening economic situation, so much so that, contrary to its usual line, it has intervened twice since the end of March to cut interest rates, for an overall reduction of 100 basis points. However, the Mexican real rate remains high compared to the average of its peers, and the central bank left the door open to the possibility of further cuts.

What can be inferred from the analysis of the cases of the two currencies is that the Covid effect clearly undermines a country's currency and macroeconomic stability, but it is the presence of pre-existing problems and historical economic weaknesses that creates the conditions for the perfect storm, amplifying the risk in the face of a shock.