Analyzing exchange rate trends for the main currencies against the dollar during 2020, you can spot some elements of surprise. In fact, if the currency that has shown the greatest appreciation against the greenback since early 2020 is the Swiss franc (+2.3%), quite a natural reaction in a context of crisis for a safe-haven currency, another currency that - more unexpectedly - signals an appreciation is the Philippine peso (+1.5%): the peso is one of the few currencies that recorded an appreciation greater than 1% against the dollar in 2020. 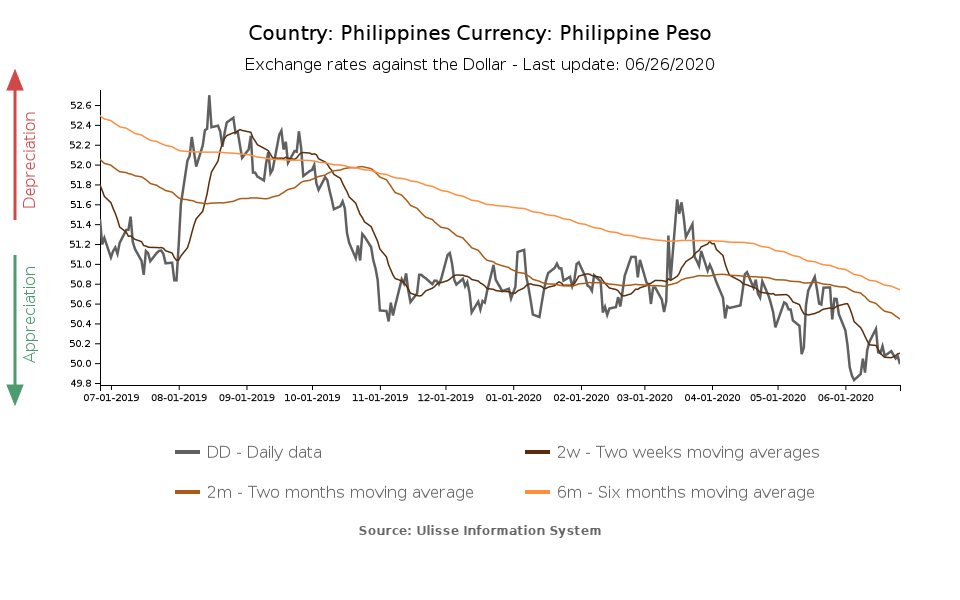 As can be seen from the graph, the depreciation of the currency during the period of maximum Covid-related market volatility was relatively limited: the peso lost just over 2% of its value against the dollar in mid-March, to then recover shortly afterwards and strengthen in recent months. Since the beginning of June, the peso has strengthened by 0.7% against the dollar, a trend that is in line with other Southeast Asian currencies, which in turn are recovering from the effects of the Coronavirus: in June, the Thai baht recovered 2.3 percentage points against the dollar, the Malaysian ringgit 0.9% of its value.

Focusing on the case of the peso, according to analysts several factors may have supported the currency during this period:

The action of the central bank

Focusing on monetary policy, yesterday's Bangko Sentral ng Pilipinas (BSP) cut its benchmark interest rate to support the economy in the post-Covid phase, mitigate downward risks to growth and support market confidence. The rate was reduced by 50 basis points to 2.25%, bringing the overall reduction since the beginning of the year to 175 basis points. However, it appears that this might be the latest cut in 2020, precisely because the central bank governor seems intent on maintaining positive real interest rates.
Central bank support is deemed necessary because uncertainty about the health crisis and its economic consequences is still high. In fact, although economic activities have been restarting in the country since early June, after more than two months of lockdown, contagions are showing an upward trend, even if the figures are much lower compared to the most affected countries.

With regard to the trade balance, the Philippine economy tends to post deficits in terms of goods, along with surpluses in terms of services and remittances from Filipino workers abroad, which are quite numerous.

In April, the contraction in world trade caused by the pandemic did not spare the Philippines: the country saw its trade deficit in terms of goods decrease significantly (from $2.4 billion in March 2020 to $499 million in April) thanks to a contraction in imports (-65.3% YoY) even more severe than the one recorded by exports (-50.8%). Given that the presence of a trade deficit puts pressure on the currency, the reduction of the deficit may, on the contrary, have supported it.

The outlook for the peso

According to most analysts, the expected scenario for peso shows some clouds on the horizon. For the economy, difficulties are expected, linked to the economic recovery following the Covid crisis, as it is happening in the rest of the world. In the first quarter of the year GDP contracted slightly, by 0.2% compared to the same period in 2019; in 2020 as a whole, however, the IMF forecasts a sharper 3.6% contraction.
On top of that, the peso presents a specific risk factor: the expected reduction in remittances in 2020, given the situation of increasing unemployment all over the world due to the health crisis. Historically, remittances in the Philippines not only supported the population’s purchasing power, but also the current account balance as a key source of foreign currency. Their reduction could therefore put pressure on the peso.