August has not proved such a boon for the dollar, that confirmed its phase of weakening in the month just ended. The analysis of the effective exchange rate suggests that its fall has been substantially continuous in the last two months, with a weakening greater than 3%; compared to the moment of maximum appreciation, at the peak of the Covid crisis, the dollar has lost more than 6% of its value.

The recent announcement by the Federal Reserve of a change in its monetary policy strategy is now added as a new factor of weakness for the dollar. On August 27-28, the (virtual) Jackson Hole Economic Policy Symposium ("Navigating the Decade Ahead: Implications for Monetary Policy") took place. During the event, the Fed chairman J. Powell announced the shift to the Average Inflation Targeting, a more flexible inflation management strategy compared to the previous 2% inflation target.
The Fed's readiness to tolerate a breach of the 2% inflation threshold has delivered the message that rates might remain low for long: this is not a supporting factor for the dollar, reducing its attractiveness compared to the recent past.

Single currency on the ECB's table for discussion

On the other side of the ocean, the single currency faces opposite problems, both because of exchange rates' bilateral nature (the euro suffers, with its appreciation, the weakness of the dollar), partly due to intrinsic factors. As we wrote in previous articles, the euro is experiencing a phase of significant strengthening, that only partially slowed down during August compared to the dynamics shown in July. After some upward leaps, which brought the euro-dollar exchange rate to 1.20 at the beginning of this week, the rate has in fact returned to 1.18, as in early August. 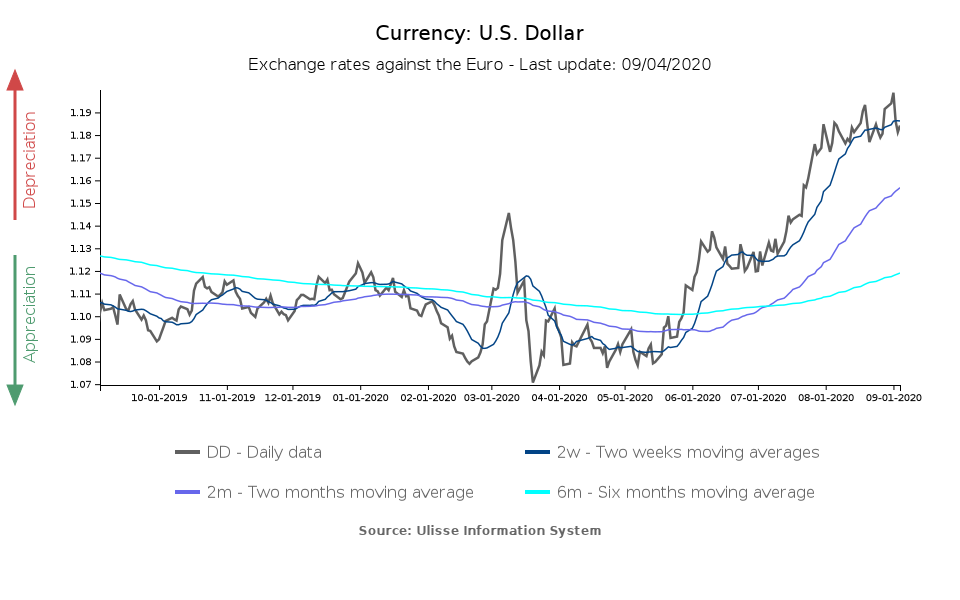 Initially, the strengthening of the euro could be read as a sign of markets' appraisal for the agreement reached on the Recovery Fund and the management of the pandemic, as well as the prospects of a recovery of the bloc's economy; nowadays, instead, the dynamics of the currency is beginning to be perceived as a problem, even by the ECB. In recent days, according to the Financial Times, European Central Bank policy-makers have expressed concerns about an excessive appreciation of the single currency, which could:

The currency issue could therefore allegedly end soon on the monetary policy discussion table.
The euro reacted to these statements with a corrective move that, as mentioned above, brought the currency down from a peak of $1.20 per euro to 1.18 in the last few days. At this point, the key event awaited by investors is the next ECB monetary policy meeting, which will take place on September 10, and where the currency issue will most likely be addressed. The assumptions of a further cut in interest rates, already negative at -0.5% (Deposit Facility), remain, however, only on a speculative level for the time being.