Faced with a 200 basis point rise in the key interest rate, the Erdogan administration breaks with monetary orthodoxy and replaces the new central bank governor

After a brief phase of lull, in which Turkey seemed to be headed towards monetary normalization, new twists and turns came from Ankara, once again bringing the country's currency into the international spotlight. A sudden move by President Erdogan caused the lira to lose ground again in recent days, as can be seen in the chart below.
Compared to its closing value on Friday, March 19, the Turkish currency lost more than 10% of its value against the greenback over the course of the following week; due to the collapse, the exchange rate has once again reached the threshold of 8 TRY per dollar. 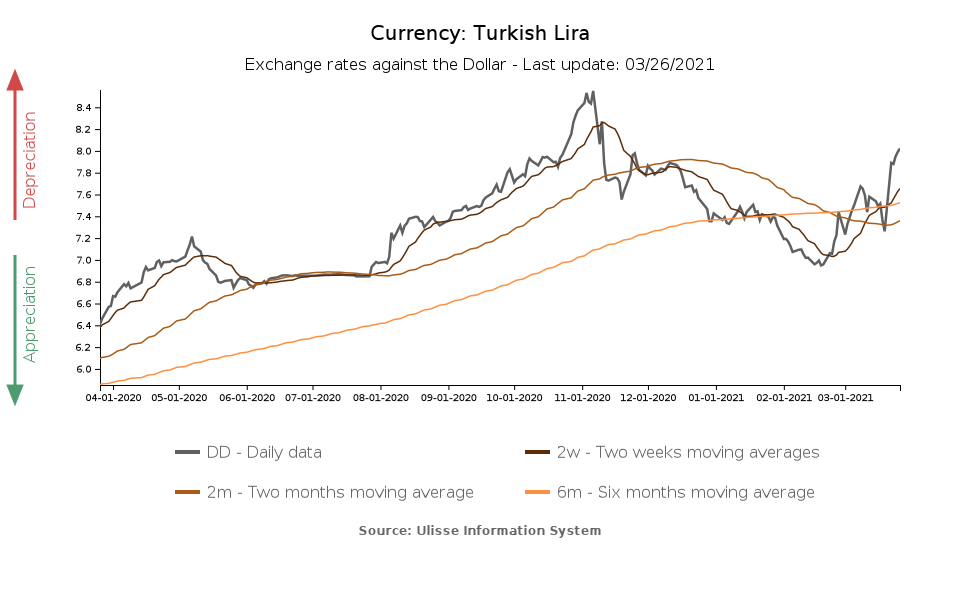 The weakening of the exchange rate is linked to a recent measure taken by President Erdogan: following the significant rise in key interest rates from 17% to 19%, announced by the Turkish central bank on Thursday, March 18, the president decreed the removal from office of Governor Agbal, who had been at the head of the institution for just a few months.

As stated during the Monetary Policy Committee, the decision for a "front-loaded and strong additional monetary tightening" was aimed at tackling inflation, which still shows no signs of slowing down: after a 15% year-over-year increase in January, the Turkish Consumer Price Index rose by almost 16% in February (source: Central Bank of the Republic of Turkey). In the face of an overheated price dynamics, Agbal's tough response has been a cumulative interest rate hike of 875 basis points since taking office in November until his recent removal from office - as illustrated by the chart below.

Agbal's orthodox1 stance - encouraged by the Erdogan administration itself last November, as a last resort for a country on the brink of a currency crisis - met markets' approval, laying the foundations for rebuilding the central bank's credibility and investor confidence in Turkey. The lira experienced this change of mood in the months that followed, recovering from November 2020 onwards, after a sharp weakening against the dollar in the previous 10 months (-43.5%).
If, at the end of 2020, the lira ranked among the currencies that suffered the largest weakenings over the year, its recovery in the first two months of 2021 led it to rank among the best performers in the cluster of floating EM currencies.

Enthusiasm was however followed by a (feared) correction. Interest rates at 19% are apparently considered too high by the Turkish administration, which has retraced its steps and replaced Agbal with a new governor, Sahap Kavcioglu, whose monetary policy ideas are allegedly more in line with those of the president.
Ankara's renewed interference in monetary policy has eroded the glimmer of confidence that Turkey had managed to rebuild in the eyes of international investors through the progress of recent months. Turkish financial markets were generally buffeted by turbulence in the days immediately following Agbal's removal: not only the currency, but also the stock market felt the blow. The BIST 100 index fell by almost 10% between Friday 19 and Tuesday, March 23, to then slightly recover. Yields on 10-year bonds climbed from 14% to 19% over the same days, and then slightly declined. Government bond yields currently remain at their highest levels since the spring of 2019, as shown in the chart below.

Although Turkish Finance and Treasury Minister Lutfi Elvan has declared that there will be no steps back on free markets and the (floating) exchange regime, international observers' fears about Turkey are high at this point and the risk of capital outflows appears concrete. Even before the president's last checkmate, the country's scenario presented elements of risk; at the moment uncertainty about the outlook for monetary policy and the possibility of an effective control of inflation is increasing, as well as the exchange rate risk.
In his first official statement, the new Governor Kavcioglu said that the central bank will continue to use the tools at its disposal to fight inflation, defined as its primary objective; however, the tools available to keep exchange rate dynamics under control are quite limited at the moment. The challenge of designing an effective monetary policy remains, as high interest rates are not considered appropriate, the stock of international reserves is currently low and capital markets are to be kept open.

1. An orthodox monetary policy is geared towards high interest rates to combat inflation and depreciation; this approach is far from the preferences of the Turkish president, which notoriously go in the opposite direction.