As has been mentioned several times, the last meeting of the Federal Reserve brought a new wind to financial markets, causing a change in the exchange rate dynamics of the greenback and several emerging currencies. Given the enormous importance of the tasks assigned to it, the Federal Reserve represents a power center capable to influence both national and international market. Understanding the effects of monetary policy choices is therefore a matter of considerable importance not only for economists, but also for the general public. In recent weeks, there has been much talk of the possibility that the Federal Reserve may decide to change its monetary policy to a more restrictive one to counter rising prices. This would certainly have significant effects on the dollar exchange rate: in particular, a hawkish turn by the central bank would tend to be reflected in an appreciation of the currency's value.

If we look at the dollar-euro exchange rate in a medium-term perspective, it is relatively stable, in a range between 1.05 and 1.20 for several years. 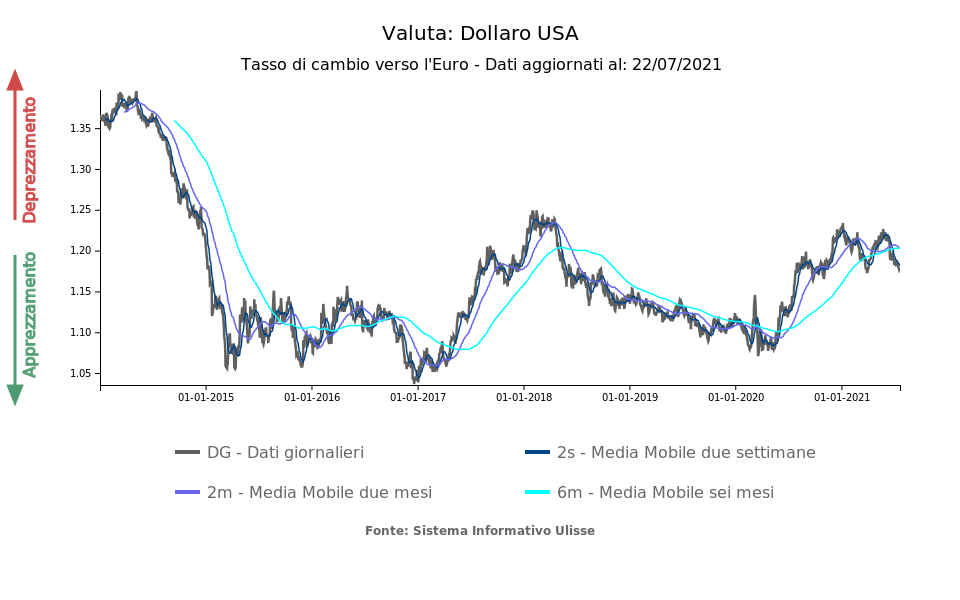 On the contrary, if we turn to a long-term perspective, we can observe that the last substantial change involving the currency concerns the period between the summer of 2014 and the winter of 2015. During those 18 months, the dollar appreciated, to the average of other currencies, by 25%, while, against the euro, it quickly went from 1.38 dollars per euro to 1.10. What can be asked, therefore, is what were the factors behind the dollar's rally in those years. Although multiple factors appear to have contributed to this strong appreciation dynamic, there is consensus among analysts that the turning point was the Fed's launch of the tapering program in January 2014.

As can be seen from the chart, following the Great Recession of 2008-2009 and the sovereign debt crisis of 2011-2012, in order to revive the country's economy, the Federal Reserve began a phase of large purchases of US government bonds and a reduction in monetary policy interest rates to below 0.5% (Qantitative Easing).

Dynamics of the FED's purchases of U.S. government securities and the nominal interest rate
January 2008-June 2021 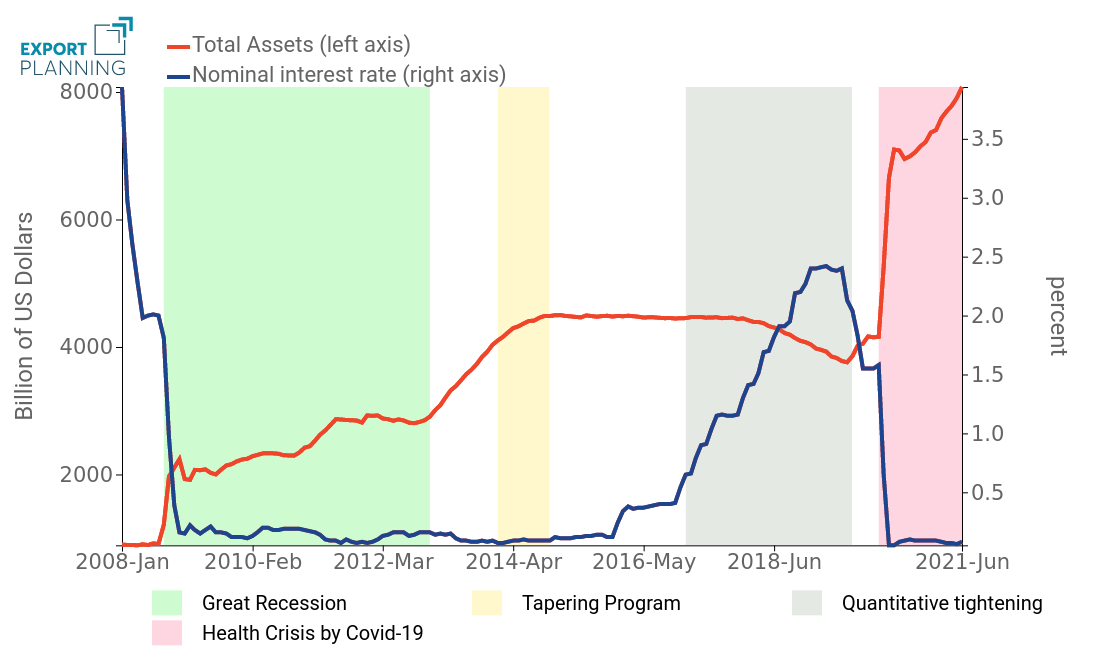 Once the most acute phase of the recession was over, in May 2013 the then president of the U.S. central bank Ben Bernanke hypothesized the introduction of tapering as a tool to initiate a new phase of normalization . Thus, tapering is a monetary policy tool adopted by a central bank that undergoes an easing of stimulus measures to the economy.
If Quantitative Easing (QE) foresees the purchase of government securities in "excess", i.e. additional securities in addition to maturities, tapering, on the contrary, foresees the progressive reduction of the monthly purchases of additional securities until reaching only the renewal of those maturing. After nearly a year of discussion, the central bank initiated the program in December 2013, reducing QE by $10 billion, with the purchase of $75 billion per month of government securities.In order to create minimal market disruption, the Fed pursued this gradual approach, ending both the tapering program and QE after the October 2014 meeting. The end of QE was a positive sign for the U.S. economy, as it revealed confidence in the central bank's economic recovery.

In order to complete the process of normalization of monetary policy, in the following years the FED used an additional tool, namely "Quantitative Tightening", which provided for the progressive reduction of the purchases of government bonds at maturity and the increase in the reference rates of monetary policy, causing, on the one hand, the reduction of the total assets of the central bank and, on the other, the increase of nominal interest rates, which until then had remained almost unchanged.

The effects on the dollar exchange rate 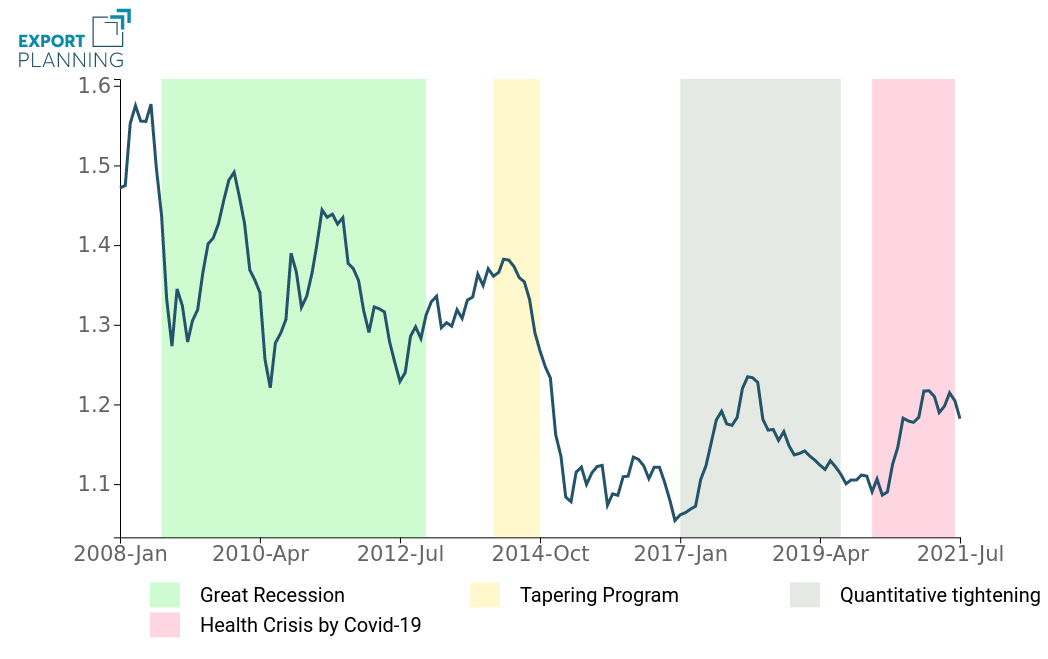 The main channel through which the tapering policy affected the exchange rate was expectations. Traders expected that the reduction of the central bank's interventions in government bond purchases would lead to an appreciation of the exchange rate, and this was the case. On the contrary, the credit crunch implemented by the Fed starting in 2017, which led to the increase in interest rates, did not result in an appreciation of the exchange rate, but rather in its opposite. Between 2017 and the beginning of 2018 the greenback depreciated by 16% against the Euro, going from minus 1.10 dollars per Euro to over 1.20. The rationale is that a tapering policy, increases yields on U.S. Treasury bonds by shifting the convenience of foreign investors to buy U.S. securities. An increase in the Fed's benchmark rates also tends to increase the rates on US debt securities, but this increase is offset by the recessionary effects on the economy. For these reasons while a tapering policy tends to result in an appreciation of the dollar, the effects of an increase in nominal interest rates are more uncertain.

Given that current U.S. monetary and fiscal policy is strongly expansionary, it is likely that monetary policy will tend to become gradually tighter in the near future. This will possibly happen through tapering, yet it is more difficult to predict whether there will also be movements in the nominal exchange rate. This depends, in fact, on the Fed's judgment on inflation. If inflation turns out to be a cyclical phenomenon that will tend to be absorbed autonomously by the economy, the increase in rates could be limited (if not null). The opposite will happen if the Fed begins to believe that the current price increase has influenced inflation expectations. At the current state of knowledge of the Fed's internal opinion on current inflation, it is likely that the shift to a less expansive monetary policy will take place almost exclusively via tapering, leaving rates substantially unchanged. In this case, at least in the short term, the dollar exchange rate could tend toward appreciation.