One of the main factor to consider when embarking on a process of internationalization is represented by fluctuations in the exchange rate.
The exchange rate risk takes into account different aspects depending on the time over which it is evaluated. In the short term, it takes into account the risk associated with a lower amount of receivables expressed in a foreign currency. In the medium-long term, it represents the risk that the purchasing power of potential customers on the foreign market undergoes a significant reduction, so much so as to modify their propensity to purchase the goods offered by the company.
The first short-term exchange rate risk can be easily managed by hedging the risk associated with receivables expressed in foreign currency. Managing the second medium/long-term risk is more complex, as it requires continuous adaptation of the conditions under which the company offers goods/services. This management, naturally, comes at a cost, which is somehow proportional to the medium/long-term exchange rate risk.
The exchange rate risk indicator developed by ExportPlanning measures only the medium-long term risk. It consists of three pillars:

For further information on this subject, please refer to the previous article: Export Risks: How to Measure Exchange Rate Risk.


ExportPlanning's medium-long term exchange rate risk index is between 0 and 100 and measures the depreciation risk associated with the currencies of 152 countries worldwide.

The following chart shows the ranking of countries with the highest exchange rate risk at the beginning of the year. Among these, in firsts posititions there are American countries such as Cuba and Venezuela and countries in East Africa such as Syria and Somalia. For these countries, the score is equal to 100, which represents the maximum possible risk. Then there are Haiti, Yemen and Afghanistan with a score of 98.28, 97.92 and 97.90 respectively and Liberia, Iran and Sierra Leone with 96.81, 96.67 and 95.97 points. 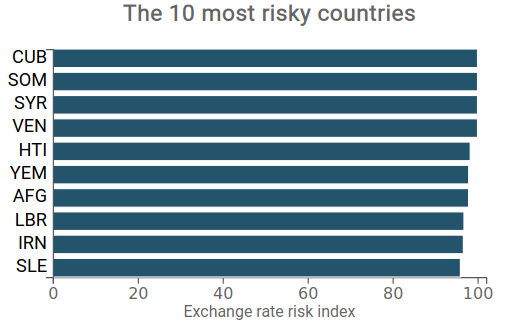 A focus on Turkey

Among the riskiest countries, at the 24th place, we find Turkey. The following graph shows the breakdown of the components of the ExportPlanning exchange rate risk index for the last two available publications: June 2021 and February 2022.
This chart provides an overview of the country's exchange rate risk dynamics. Analysis of data shows that over the past six months, the exchange rate risk indicator (IDX) has decreased slightly from 90 to 88.24. Changes in the ExportPlanning index are due to changes in its components. As regards the first pillar (PPP), regarding relative inflation, and the third pillar (CRED), regarding the credibility of the country and currency, these have not recorded significant variations in the last period. It is different for the second pillar (RES), regarding resources in currency, which has decreased from 85.09 to 76. 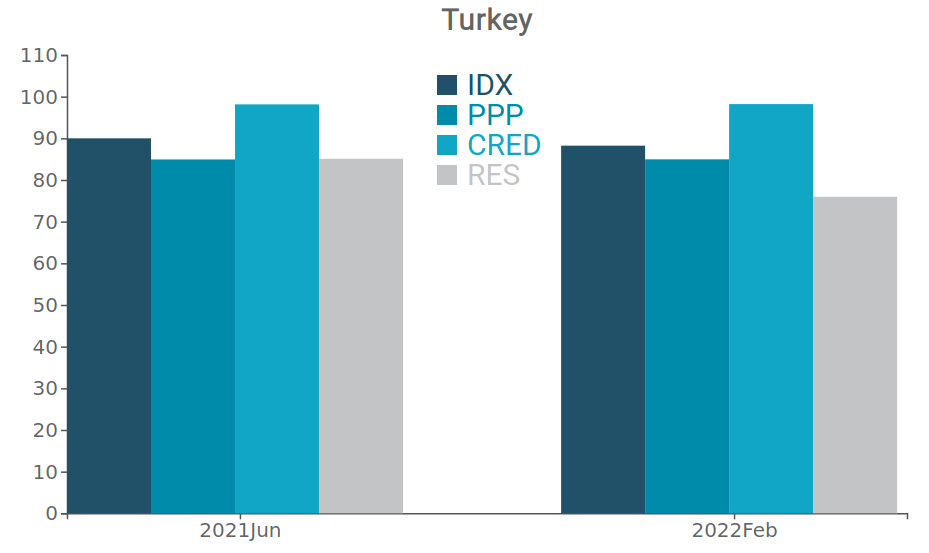 Last fall, the Turkish lira underwent a major depreciation, which was followed by a significant recovery. This phase was not captured by the ExportPlanning indicator. This is because the index was designed to take into account just the structural elements of an economy and, therefore, any shocks of a temporary nature may go unnoticed.
Although a slight improvement in the exchange rate risk index has been reported, Turkey is still a "high-risk" country. Any decision to export to Turkey must therefore be preceded by careful consideration.