New sanctions on Russia? Analysis of the implications for the Ruble

As long as there are tensions with the US, Ruble exchange rate risk should be closely monitored.

A Financial Times report published on Tuesday brought the theme of sanctions against Russia back in the spotlight. The EU and the US are allegeldly coordinating to impose new sanctions on Russia, following the capture of 24 Ukranian sailors off the coast of Crimea in November.
EU foreign affairs ministers are supposed to discuss the theme during the council next Monday, while the US have already acted: on Wednesday US senators introduced a bipartisan bill about new sanctions on Russia1, that aim to punish alleged Russian election meddling, as well. If they will be approved, they will hit, among others, “banks that support Russian efforts to undermine democratic institutions in other countries”, “Russian sovereign debt” and “Russian stated owned energy projects outside of Russia”. 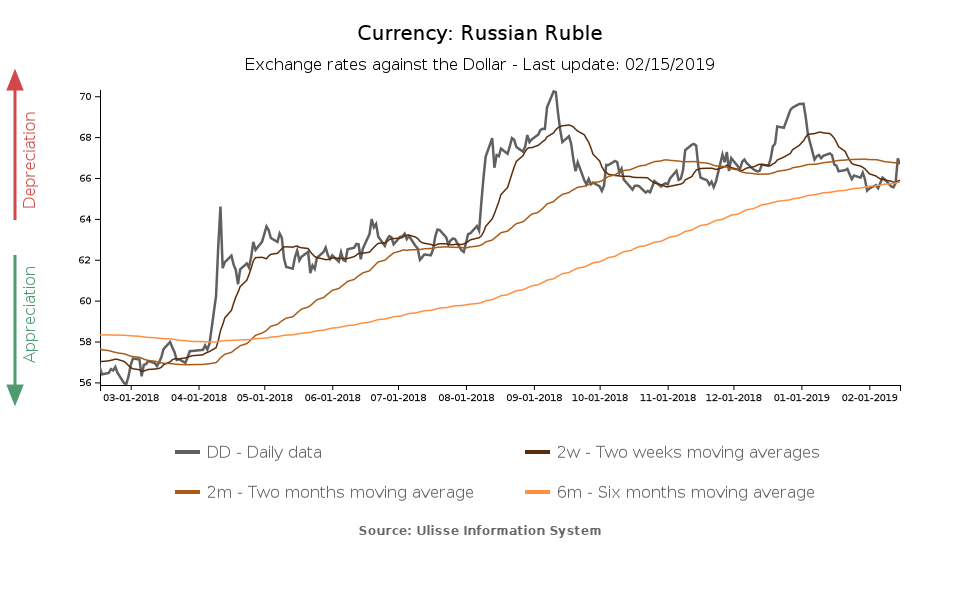 Reactions from the Kremlin

Russian government confirmed that the country can cope with new sanctions without jeopardising macroeconomic stabiliy. In this context, foreign exchange reserves are one of Russia’s major assets: the Central Bank of the Russian Federation can use them to counter a potential depreciation of the currency.
At the end of 2018, Russian foreign exchange reserves amounted to 382 billion dollars (source: exportplanning.com); according to the latest data, in the first months of 2019 the stock grew even more, reaching 475 billions at the beginning of February. It seems likely that the central bank is accumulating reserves to be ready to shield the currency from potential speculative attacks. 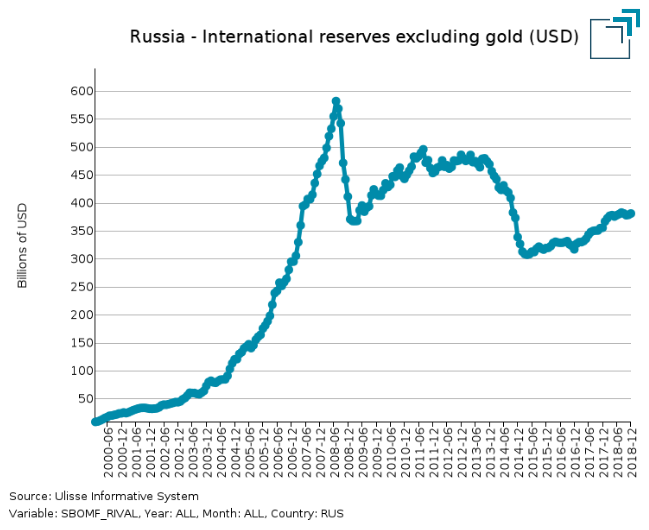 The escalation of tensions with the US during 2018 certainly contributed to the decision of the central bank of Russia to diversify its international reserves away from the dollar. Russian gold reserves shifted from 76.6 billion dollars in December 2017 to 86.9 billions in December 2018. Foreign exchange reserves have been diversified, as well: according to a report2 by the central bank of Russia, between June 30 2017 and June 30 2018:

Another element that leads us to believe that Russia has room for manoeuvre in case of damage inflicted by new sanctions is its low level of public debt (15% of GDP in 2018 according to IMF forecasts).

The dangers of political uncertainty

From this brief analysis, we can infer that Russia is quite solid and equipped to deal with external shocks. Nonotheless, political uncertainty matters: as long as there are tensions with the US, for those exporting to Russia exchange rate risk should be closely monitored.
To gain a better understanding of the importance of the political factor, let us focus on the case of oil. Russia is world’s second major oil exporter, so the price of oil tends to influence Russian Ruble exchange rate: if the price of oil increases, the currency is likely to strengthen.
In the last few days the price of oil increased, reaching a 3-month high; nonetheless, the Ruble depreciated. The weight of tensions related to new sanctions could have therefore “cancelled” the beneficial effect for the currency of rising oil prices.
All in all, if the country aims at stability over the long term, the resolution of political conflicts looks like a very necessary part of the process.