US-China trade conflict represents one of the most significant risks for international economic growth. However, according to latest information, the temporary truce signed during the G20 summit between China and the United States brings positive results. The parties have in fact toned down the debate and the heads of ministerial delegations want to proceed towards a commercial agreement.

Although it is difficult to make any kind of prediction about the strategy that the US administration wants to pursue in order to reduce the trade deficit with China, the commitment shown by the two countries in seeking a form of dialogue is the proof of the awareness of the economic costs of protectionism.

As reported in previous articles, Trump's trade war with China involves multiple battles. On July 6, US 25% tariffs on $50 billion of Chinese imports go into effect, followed by a second action that has hit $200 billion of Chinese goods on 24 September with a 10% tariff.

Using ExportPlanning data from Conjuncture USA it is possible to analyze the mid-term effects of US tariff on the commercial flows between the two countries imposed during the last six months of 2018.
The chart below shows the main categories subject to tariff measures issued by Trump administration on the left and the relative variation between the second half of 2017 and the second half of 2018 on the right.

Chinese goods hit by US tariffs and % change rate 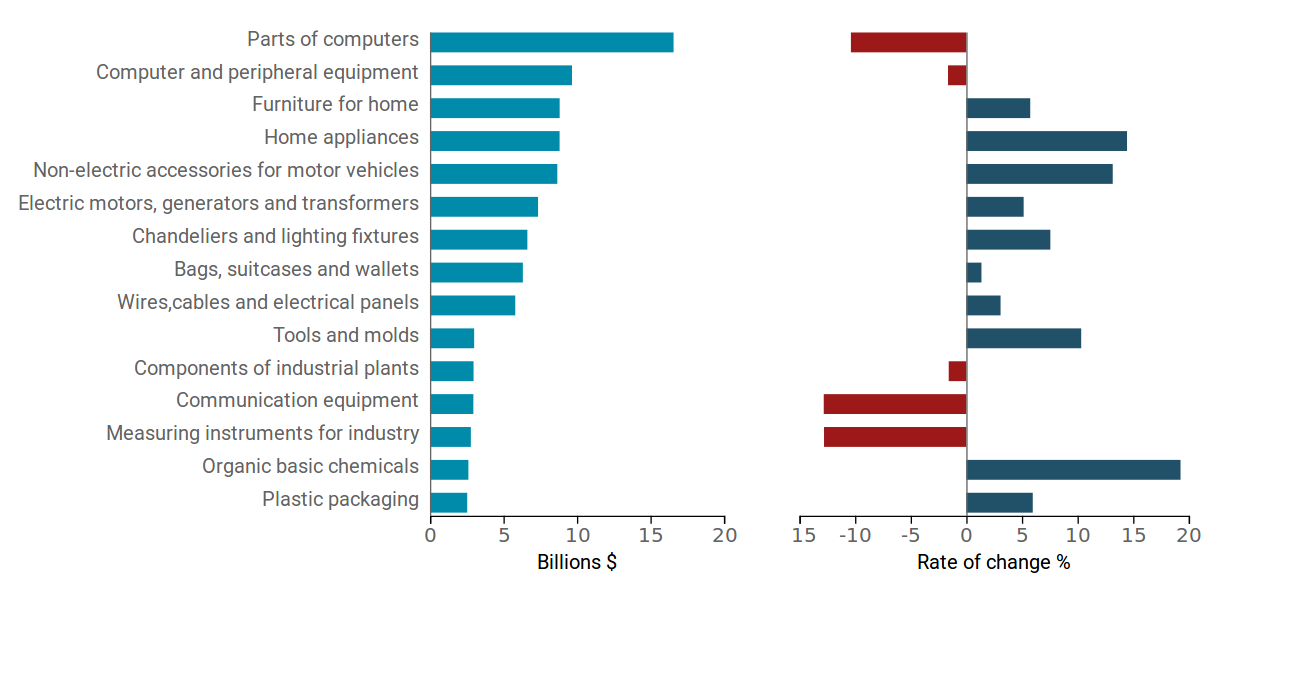 A significant reduction of American imports were reported by electronic parts for computers and other office machines, which has fallen by 10.4% between the second half of 2018 and the second half of 2017. Also the communications equipment (network devices, electronic dictionaries) and measuring instruments for the industry suffered a 12.8% reduction during the period.

The contraction recorded for the computer and peripheral equipment (desktops, CPUs, keyboards, hard disks) and for the components of industrial plants (pumps, boilers, turbines) resulted less intense, for both categories equal to -1.6%.

On the contrary, the American imports from China of the remaining categories maintains a positive dynamic. However, the growth recorded a slow down for the following product: basic chemicals, furniture, mattresses and furnishing elements, engines, generators and transformers, bags, suitcases and wallets , electrical wires, cables and switches and plastic packaging.
There are still, however, product for which the change in the value of American imports from China confirms a growth trend.

In aggregate, American imports from China recorded a modest growth of 2.6% in the second half of the year, with an increase of $ 6.8 billion, by reporting a sharp slowdown compared to previous periods.
U.S tariff seem to have reduced American import flows, but to a limited extent for the moment. The evidence is partly attributable to a forward-looking approach of American consumers, due to an increase in imports in the period immediately preceding the introduction of tariffs, which therefore might distort the analysis.

Evidence from U.S export to China

In analyzing the effects of the tariff war, the impact of Beijing's retaliation tariff on US exports have also be taken into account. US exports to China were in fact reduced by 20% in the second half of the year, with a contraction of $ 15 billion. The reduction is mainly due to a huge decrease in US soybean exports, fell by $ 8 billion compared to the second half of last year.
Sales of American soybeans on the Chinese market are highly seasonal, as shown in the chart below; the peak of seasonal deliveries is, in fact, reached during the last quarter of the year. The introduction of Chinese tariffs on imports from America has drastically reduced the value of US fourth-quarter exports, severely penalizing US soybean producers for whom China represented the largest export destination market. 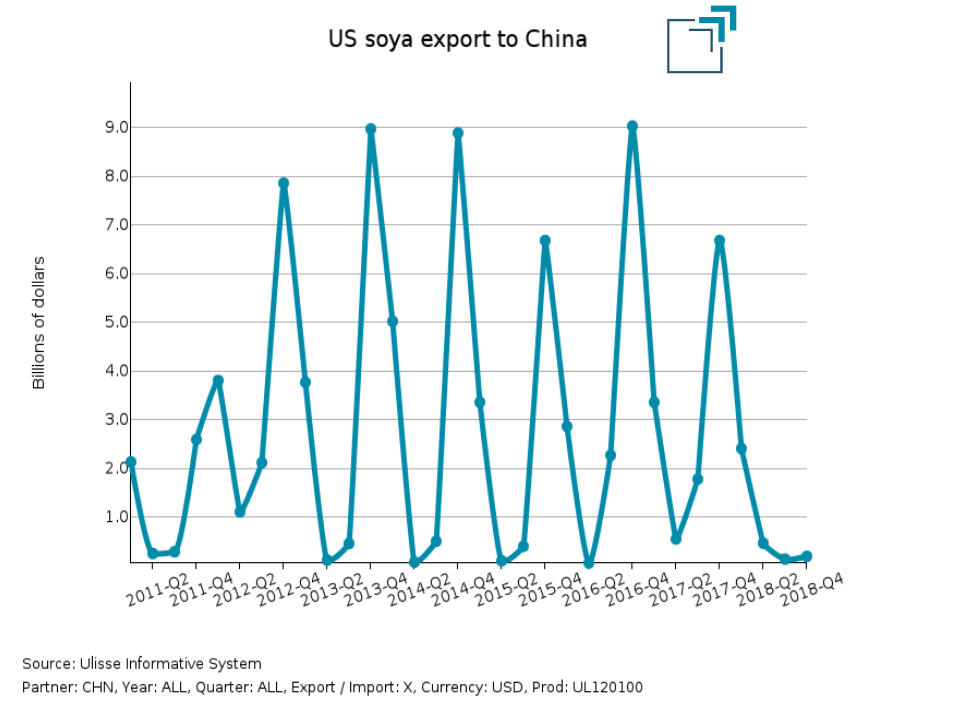 Foreign trade data analysis suggests that the tariff imposition has proved to be an ineffective instrument to reduce American trade deficit towards China, which grew further in 2018 reaching 413 billion $, because of the deterioration of US export performance on the Asian market. Tariffs have basically become a mere threat for both economies, as well as for global economy.
In fact, on the Eastern front, Chinese manufacturing activity has shown signs of slowing down, while on the western front, US agricultural producers have been hit hard by the trade war.
At the same time, however, tariff instrument played a role of primary importance in the relationship between the two economies. It represented, in fact, the means by which China and the United States found the basis for a bilateral dialogue.

It is therefore important to try to understand if, after the Chinese goods, the Trump administration will also target European automotive sector, in order to force EU to negotiate bilaterally.