The nature of the Chinese "conjunctural crisis"

During the second part of 2018, many signs of a "conjunctural crisis" emerged in the Chinese economy.

The ongoing slowdown in the world economy also seems to have among its causes a conjunctural crisis of the Chinese economy.
Reading the Chinese economy requires a different framework than the one we use for industrialized countries. The potential of the Chinese economy has been growing for several years at rates close to 6%. In this situation, growth rates significantly lower than 6% can be qualified with the word conjunctural crisis, meaning by this term an economic situation in which many aspects do not go in the desired direction.
If we take as a reference the exports declared by the partner countries, the Chinese economy in this decade has already crossed three periods of conjunctural crisis: the central part of 2014, the second half of 2016 and the second half of 2018.
The following chart shows the quarterly variation rates at constant prices of the export declarations by a sample of 70 countries to China. From the graph it is clear that in this decade the Chinese economy has undergone three sharp cyclical phases of low growth. In particular, the slowdown between the first and second half of 2018 is very evident with a third quarter in which exports at constant world prices to China have undergone a reduction y/y.

It may be useful to check how these three conjunctural crisis have also been detected by other indicators.
The most commonly used conjunctural indicator for the Chinese economy is the China Caixin Manufacturing PMI , shown below.

This indicator is based on the classic PMI (Purchasing Managers' Index) methodology and it is produced by the Chinese communication company Caixin Media Company Ltd. The analysis of it indicates a phase of uncertainty in all the years before 2016, followed by a phase of development ended in the second part of 2018. This indicator therefore seems to confirm mainly the strong slowdown recorded by partner country exports at the end of 2018. 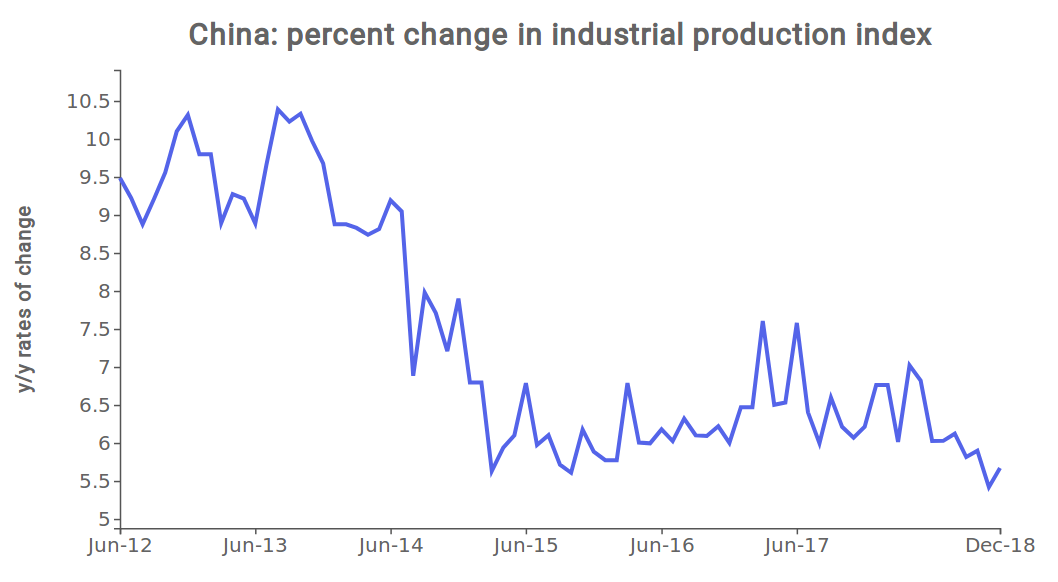 these facts clearly emerge from the analysis of the data:

Both the SME and the production index do not seem to signal the 2016 crisis .
The reason is because it was more of a financial nature, began with the bursting of the stock market bubble on June 12, 2015 and continued with the depreciation of the yuan during 2016 and early 2017. This crisis had limited effects on the real economy because the Chinese state interventions were broad, sudden and effective, aimed both at supporting stock exchange prices and keeping the exchange rate.

This brief analysis suggests that the current phase of the economic crisis of the Chinese economy has characteristics in parts common to the 2014 crisis and partly common to that of 2016, but of less intensity than both. A downward adjustment of the Chinese industry's growth path is underway, as in the 2014 crisis ; the second half of 2018 saw a simultaneous decline in both the stock market and the exchange rate, as in the 2016 crisis . However, both the adjustment of the production growth trend and the decline in the exchange and exchange rates are of intensity much lower than that experienced in 2014 and 2016.
This leads us to believe that, as then, even this slowdown in world exports to China may be short-lived.