The current economic slowdown will lead to a decline in investments and international trade of capital goods.

One of the most significant elements to understanding the current slowdown of the international economy is revealed in the analysis of international investments in machinery, equipment and construction industry. As an economic variable, investments are particularly exposed to macroeconomic shocks and the uncertainty of investor expectations.

The following graphs show the dynamics of GDP and investments in a historical perspective, in terms of growth at constant prices, based on estimates made by the International Monetary Fund which are available at the following link. The figures are associated with changes recorded by global trade flows of capital goods. 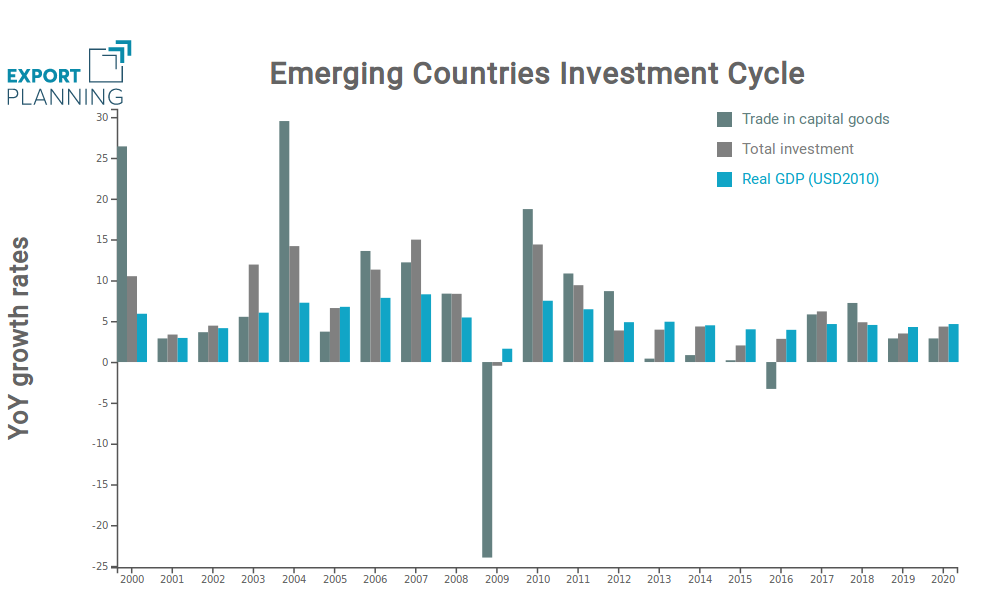 In general, the rate of growth in international investments has remained in line with real growth rate in the economy since the beginning of the century.
From a historical perspective, the cycles that characterise trends in global investments during recent years are evident. The first phase of expansion was interrupted with the bursting of the internet bubble between 2000 and 2001, which was followed by a new growth phase that ended with the subprime crisis of 2008-2009. The recovery of investments in the post-crisis period shows two major slowdown periods: the first in conjunction with the sovereign debt crisis (2011-2012), and the second in 2016, in relation to the slowdown in growth of the Chinese economy.
Refocusing the analysis on more recent years, two important elements emerge:

One of the most significant factors behind the current slowdown is the increase in uncertainty on a global scale, that is strongly linked to the protectionist stance of US trade policies. A second important factor to consider is the weakness of the manufacturing sector, especially the automotive industry, which has amplified the end of the global cycle.