The US dollar comeback in Cuba

Venezuelan crisis and US embargo are weighing on Cuban economy.

One of the emerging issues in recent months in Latin America is dollarization. In Venezuela, given the strong economic crisis going and the consequent record depreciation of the Bolivar, transactions - especially for oil - are increasingly being conducted in US dollars, in the face of a basically worthless national currency.

The Bolivar Soberano has been introduced on August 20 2018 in the attempt to fight iperinflation, replacing the previous Bolivar Fuerte.

In Cuba, on the other hand, at the end of October, US dollar has been reintroduced for transactions, putting an end to a ban remounting to the early 2000s.
This choice adds a third pillar to the Cuban currency system, which is already twofold. Two currencies are currently used in Cuba: the Cuban peso (CUP) and the Cuban convertible peso (CUC). The latter is linked to the US dollar (1:1 ratio) and can be exchanged, according to official rates, for 24 CUP (sell) and 25 CUP (buy).
While the CUP is used by local population (e.g. the government uses the CUP to pay its employees; citizens use it to pay for utilities etc.), the CUC is mainly used by tourists, to send remittances to Cuba and in the private sector (restaurants, hotels, gasoline...).

The reintroduction of the dollar in Cuba is part of a government attempt to pursue two main goals: 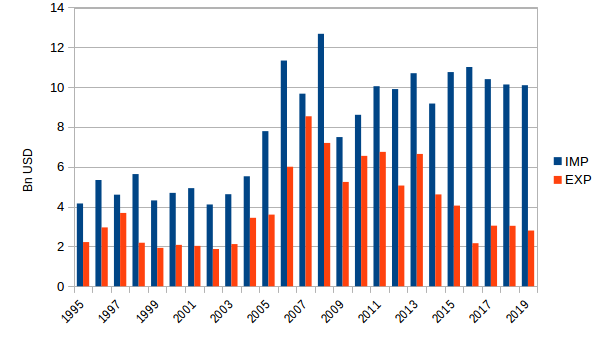 In a wider perspective, the dollar comeback in Cuba aims at coping with the deterioration of the economy, that took place over the past year. Increased tensions with the US (after the opening of the Obama phase) exacerbated economic hardship. During 2019, President Trump tightened the embargo, causing:

The shortage of dollars has put the CUC under pressure. Despite being traded with US dollar at an official rate of 1:1, the CUC has actually suffered a depreciation on the black market; thus, the government decision to reintroduce the dollar, hoping to obtain hard currency.

The dollar can be used to pay for consumer goods such as household appliances, car parts, televisions, air conditioners, refrigerators etc. in new state shops (Tiendas Moneda Libremente Convertible); the payment can exclusively be electronical. The government is thus seeking to catch foreign currency that consumers would otherwise allocate to the informal market, given the scarce supply on the official market.
According to international observers, this phase of the crisis could act as a catalyst and push the Cuban government to speed up reforms; nonetheless, there is still a long way to go.