As last week, our Weekly Currency Update focuses on Latin America. After the case of Chile which, like Colombia, is starting 2020 in the name of street protests, today we will focus on Mexico, which is currently going through a phase of economic stagnation.
As can be seen from the graph below, the country's GDP registered anaemic growth in the year just ended: in the first two quarters, GDP growth remained slightly above 0, while in Q3 it contracted by 0.4% compared to the same period in 2018.

As regards prices, inflation has been slowing down since spring 2019, and in November it fell below the 3% target set by the central bank. The value recorded in December was 2.83%, the lowest since August 2016.

The reaction of the central bank

In response, the Bank of Mexico began an easing cycle in August 2019, gradually reducing its reference interest rate: from 8.25% in July to 7.25% in December.
In the action of the central bank, two elements look particularly noteworthy: 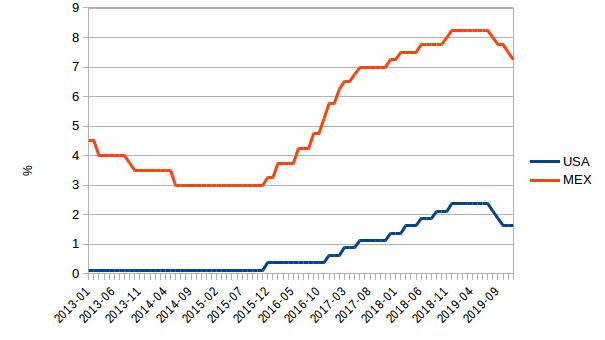 The dynamics of the peso

In this context of slowdown, the Mexican peso remained quite stable: during 2019, the currency fluctuated between 19 and 20 pesos per dollar. In particular, after a period of greater stability in the first half of the year, the peso depreciated during August, and then recovered in the following months.

Focusing on the last month, since early December the peso has strengthened by 4% against the dollar, helped by a slight weakening of the greenback (-1.6% in terms of effective exchange rate since the beginning of December), but also by markets’ optimism for the new agreement reached in December by the US, Canada and Mexico on the USMCA front.
The United States-Mexico-Canada Free Trade Agreement, signed last year to replace NAFTA, had in fact been subject to criticism by Democrats, especially on environmental and labour issues. The outcome of the negotiations led to a "revised" treaty, signed last December 10. This event, which symbolized the end of uncertainty regarding relations with Mexico's most important trading partner, help the peso strengthen; nevertheless, as stated by the Banco de Mexico, ratification of the USMCA alone will not be enough to restore confidence and investment in Mexico. For President López Obrador, the need to address the domestic causes of uncertainty therefore remains a primary concern.

According to analysts, one element that may influence the dynamics of the peso in the coming months is US President Trump pre-elections rhetoric. History tells that, during the election campaign, the outgoing president could resort to the topic of Mexico, especially on trade and illegal immigration; this kind of attacks could generate tensions, that could be reflected on financial markets, penalizing the currency.

2022: year of strong growth in values but also in quantities, thanks to the presence of numerous BLue OCean (BLOC) markets [ Read all ]