US stocks start fretting, as well.

The theme that has dominated markets and influenced the dynamics of exchange rates this week is still the current Coronavirus epidemic. In particular, investor sentiment has shown a deterioration following the recent and significant spread of the virus in Northern Italy, a factor that signals the consolidated presence of the epidemic outside of China and Asia.
In this new phase of the epidemic, two phenomena can be observed on financial markets:

This week financial panic has infected the US, anticipating the potential effect of an epidemic, as can be seen from stock exchanges and exchange rates. In the last week the dollar has in fact recorded a 1.85% drop against the euro, temporarily reversing the former trend of the single currency. 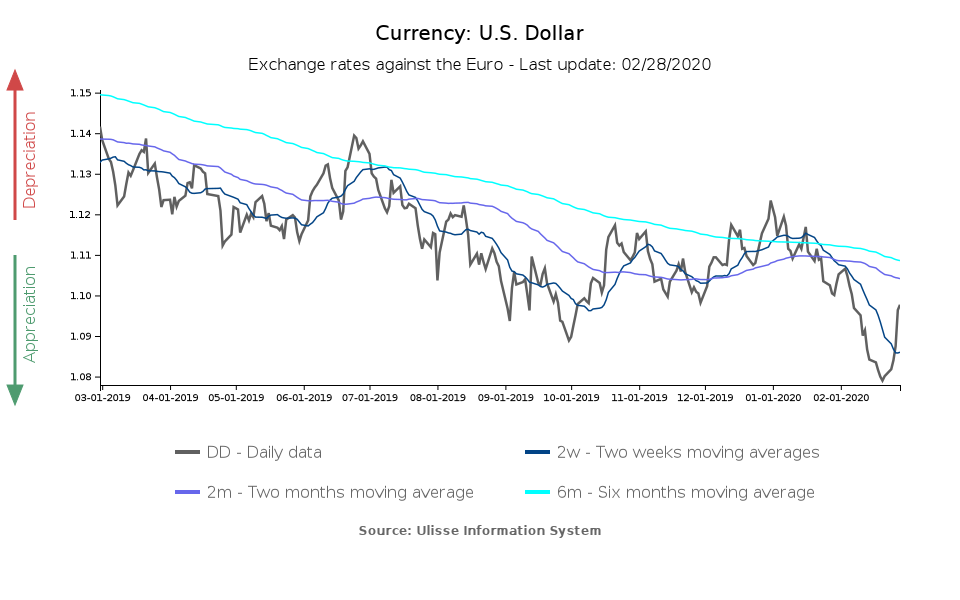 This turnaround can not be attributed to the strength of the single currency: the only (weak) positive news for the euro this week has been the slight increase in the German Purchasing Manager Index (manufacturing) and the ifo Business Climate index in February. The biggest contribution to the weakening of the greenback therefore came from the Coronavirus panic that hit Wall Street, causing significant losses: between February 19 and 27, the S&P 500 index recorded a drop (-12%), as did the Dow Jones (-12%) and the Nasdaq (-14%). The VIX index (the "fear index", which measures implicit volatility of the S&P 500 index) rose sharply, reaching its highest levels since 2008.
In this context, investors on the US market quickly moved from equities to safer bonds, causing an increase in their prices and a reduction in thier yields.

This week, the current situation of financial panic and increased volatility affected emerging non-Asian countries as well, which had until recently remained quite insulated from the epidemic panic.
Stock markets experienced significant contractions: in the case of Latin America, where the first case of Coronavirus was announced this week, MSCI Emerging Markets index contracted by more than 8%. Currencies were also penalized by a general risk-off sentiment, which adds to unfavourable national economic frameworks. This amplifies investors' fears about the impact of the epidemic on these economies. 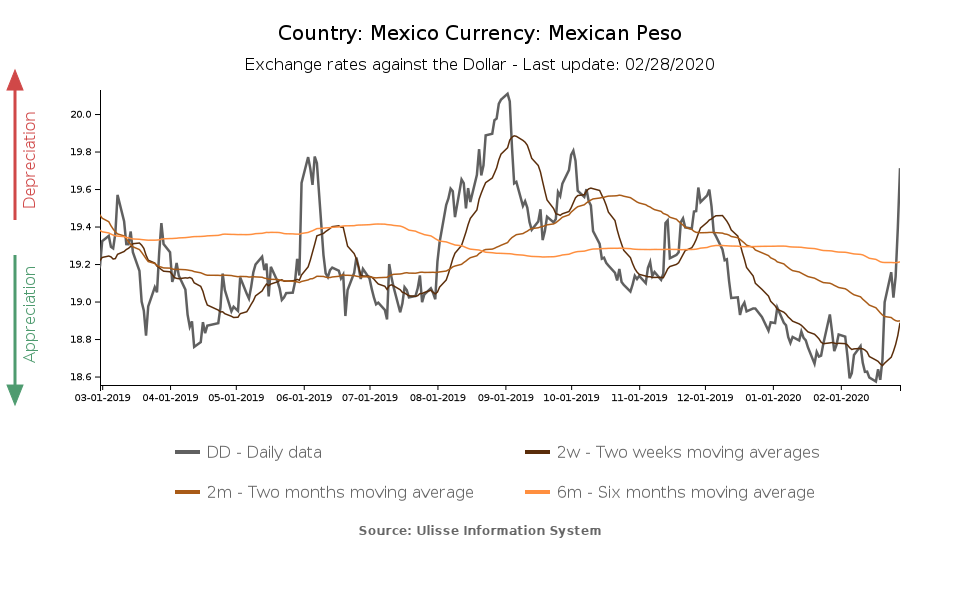 As regards the case of Mexican peso, shown above, its exchange rate against the dollar weakened by more than 6% in just over a week. This is attributable not only to market fears of a global epidemic, but also to the context of "mild recession" that keeps on weighing on the country's economy and is expected to endure in the coming months. GDP growth at constant prices has been showing signs of stagnation since the end of 2018 while, for 2020, the Mexican central bank has recently carried out a downward revision of its forecasts.

The Brazilian real, on the other hand, has shown in recent days an acceleration of a weakening trend that had already begun in early 2020: this brings the overall depreciation against the dollar to 12% since the beginning of the year. 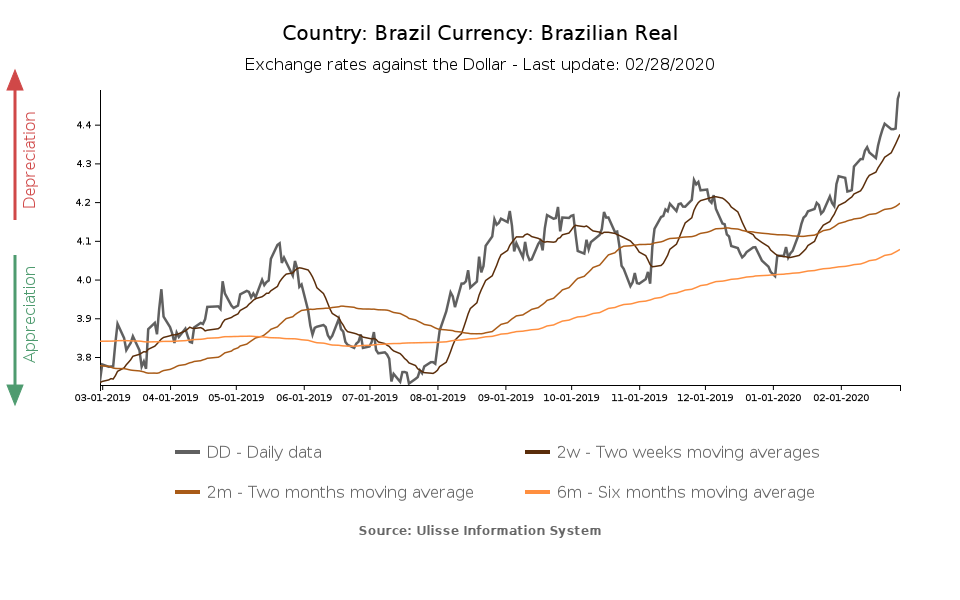 Even in this case, the panic effect that has marked the last few days joins a context of pre-existing weakness, where a sustained economic recovery is struggling to get off the ground and the currency remains under pressure from several concomitant causes (from low real interest rates, unattractive for investors, to the recent capital outflow and widening current account deficit).

Last but not least, let us take a look at South African rand which, in turn, has accelerated its depreciation dynamics in recent days. In this case, the climate of risk aversion worsens an already critical situation: the country is in fact on the brink of downgrade by Moody's, the only rating agency that has not yet downgraded South African sovereign debt to the "junk" level. The recent downward revision of Moody’s growth estimates for South Africa in 2020, a move that markets fear may precede the downgrade, has exacerbated tensions in financial markets as well as the depreciation of the rand.