Euro, Dollar and the Pound: An Update

Stability for the single currency, thanks to the action of the ECB and the European Commission; clouds on the horizon for the greenback and the pound.

Yesterday the Governing Council of the European Central Bank met in Frankfurt. According to the press release, the amount allocated to the PEPP (Pandemic Emergency Purchase Programme) has been increased by €600 billion, for a total amount of €1350 billion. The plan was initially launched by the ECB in mid-March, with a budget of €750 billion, for the purchase of public and private sector securities, in order to counter the risks posed to the euro area by the health emergency.
The Governing Council has also agreed to continue the purchases at least until the end of June 2021 (or in any case until the end of the so-called "Corona crisis") and to "reinvest the maturing principal payments from securities purchased under the PEPP until at least the end of 2022". Instead, reference interest rates are maintained unchanged.

This news exerted a positive impact on the euro, renewing the ECB's commitment to do “whatever it takes”. This strong stance reduces the risk associated with the euro and ensures a relative stability for the currency in the near future. The recovery plan proposed by the European Commission last week, the so-called "Next Generation EU", has also caused positive reactions on financial markets: if approved, as it is supposed to be, it will alleviate fiscal pressures on member states hit by the Covid crisis. In the wake of this good news, the euro has shown a strengthening starting from last week, as can be seen from the graph below. If analysts do not expect a further strengthening in the months to come, expectations point to stability, given the strong shield put in place by the ECB. 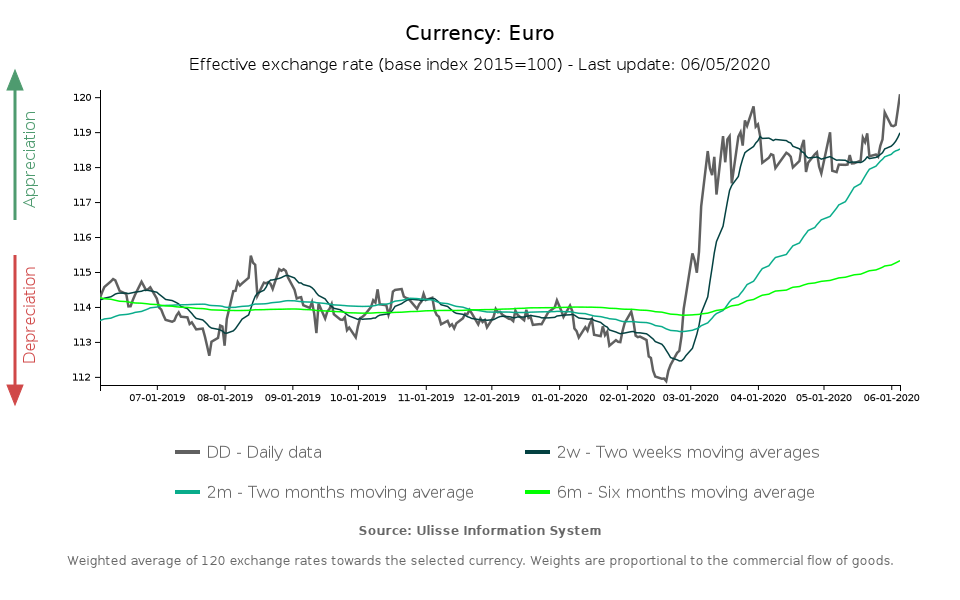 Different outlook, instead, for the dollar and pound, which are expected to enter a phase of weakness in the coming months.
As far as the greenback is concerned, since the beginning of the pandemic it has proved to be investors’ ultimate safe-haven; demand for dollars has skyrocketed and the currency has considerably appreciated, especially in March. As it started to emerge a few weeks ago, the dollar now seems to have entered a new phase, marking a clear turnaround. Since mid-May, the currency has lost almost 4% of its value in terms of effective exchange rate.

This dynamics suggests that the change in sentiment on financial markets is beginning to be quite clear, as the epidemic gradually fades, lockdowns are being removed in many world countries and economic activity is resumed. Appetite for risk therefore seems to be regaining momentum, along with a cautious optimism about the recovery of the global economy. The dollar rally might therefore be over, unless serious tensions return on the scene.
In a situation of gradual normalization, it would indeed be unprofitable for investors to keep capital parked in dollars, when US interest rates have also become very low. Capital could then slowly return to countries with higher associated risk, but also higher returns.
In addition to the just mentioned “external” factors, which have been exerting an impact on the dollar in recent weeks, an internal factor should also be taken into account: the massive street protests against racism that are taking place throughout the United States, following the death of George Floyd at the beginning of last week. These events, causing instability on the domestic front, may have further accelerated the weakening of the dollar.

A look across the Channel

This week the British pound is in the spotlight as well, since the fourth round of negotiations on the post-Brexit trade agreement took place. The round, closed today, did not lead to significant progress.
The pound, for its part, has not shown significant fluctuations in recent days, but experts say that the risk associated with it is increasing, as the sword of Damocles of Brexit approaches. Until the end of the month, Great Britain could ask for an extension of the transition period (which at present would end on December 31, 2020), but this request is considerend unlikely. Consequently, the deadline for reaching an agreement that could be approved by the end of the year is around October. A difficult summer of negotiations and uncertainty is therefore expected.