World demand showed signs of a downturn since the early months of the new year until it fell sharply in April. What is the performance for the top importing markets?

Since the early months of this year, when the effects of the health crisis were still weak, global demand for Agricultural Equipment- measured in euros - has begun a phase of downturn, confirmed both by export declarations and import declarations data, as shown in the graph below. 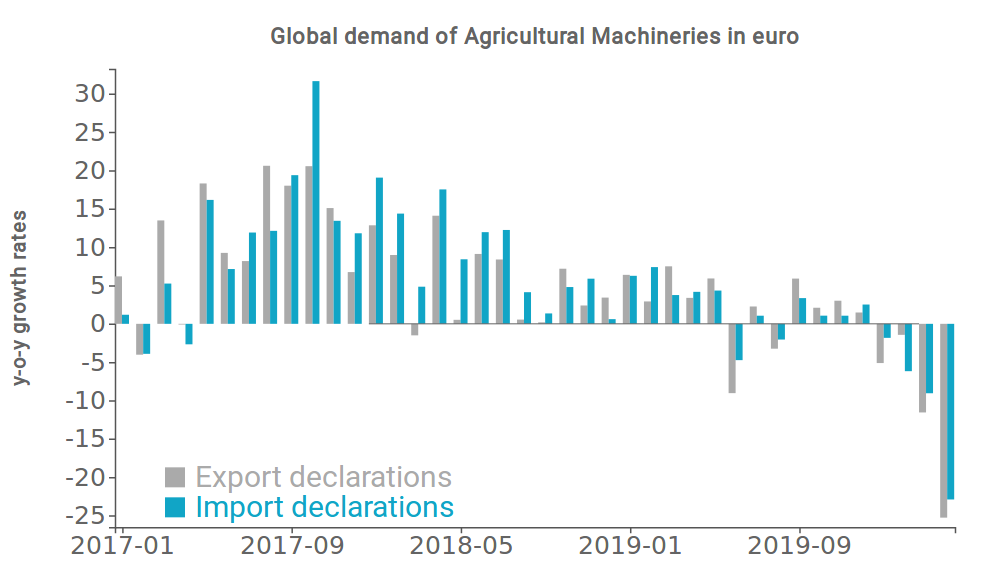 A not particularly brilliant beginning of the year has subsequently resulted in significant collapses, particularly evident in the months of March and April, when the effects of the pandemic became more robust on the international scene, leading to joint shocks on the supply and demand sides.
The month of April reported the most dramatic contraction, close to -25% in euros. In which region of the world have the worst results been recorded?

The chart below shows the top importing markets of Agricultural Machinery in relation to the rate of change recorded in Q1-2020 and in April; the value of the ball is proportional to 2019 imports value. The bisector, marked in yellow, divides the markets that saw an intensification of declines already visible in the first few months of the year from those that bucked the trend.

As a durable product, the Agricultural Machinery sector was heavily exposed to the recessionary effects of the health emergency, following a phase of deterioration in world demand that has been visible since the beginning of the year. Despite the sharp contraction visible in the main European and American markets, Asia proved to be a relatively resilient area. The current international context, characterised by deep uncertainty, therefore requires the necessary planning of actions and markets to overcome the complexity of the restart.