In the period April-May, the main importing countries recorded falls between 20% and 30% in euro; greater resilience for South-East Asia

The recent update of our Quarterly International Trade Datamart (part of the ExportPlanning Information System) allows us to continuously monitor the state of world trade, in order to describe in "real time" the intensity of its current fall and the trends in demand shown by countries.
As anticipated in the article World trade: in May continues the decline observed in April, the spread of the epidemic on an international scale led to a fall in international trade flows in the order of -20% in April, and a further slight worsening during the month of May. Based on ExportPlanning estimates, the contraction in world demand in quantity is therefore close to -18% in the second quarter of the year, in line with the estimates recently published by the WTO.

Of great interest to European and Italian companies operating on international markets is also the estimate of the drop recorded in euro in the two-month period April-May, close to -25%. During the period April-May, the blockade measures affected the largest share of the global population and the drop in demand was generalised and extended to all the main importing markets.
The graph below shows the main importing countries in relation to the y-o-y variation (compared to the same period last year) recorded in the first quarter of 2020 and in the two-month period April-May; the value of each ball is proportional to the value of imports in 2019.

It is clear that the main economies in April and May experienced falls between -20% and -30% in euro: China reported a 21% drop in the two-month period considered, compared to a 26% fall recorded by Germany; -31% in the USA. The most significant contractions during the period were recorded for European countries, particularly United Kingdom, France and Spain, which can be found in the lower left hand corner of the graph. On the contrary, the economies of Southeast Asia (top right), together with Taiwan, showed significant growth in the first quarter, with relatively smaller declines in April-May, between -5% and -9%.

An analysis of the dynamics of interregional trade flows allows to highlight even more differentiated trends for world geographical areas, which can prove the different degree of value chains' integration and the diversified effects of the global health crisis in sectoral terms.

As the graph shows, while trade within Asia has decreased by only 15%, trade flows within the USMCA area (United States-Mexico-Canada Agreement, ex NAFTA) have contracted by more than 40%, mainly due to the collapse experienced by the Automotive sector. The second most affected area was the European area, in terms of intra-EU trade, which fell by 33%. Also in this case, the contraction of the Machinery and Automotive sectors was highly significant.

The epidemic is having a very uneven impact on manufacturing industries, making increasingly necessary for companies to adopt a strategic planning approach, in order to take advantage of a recovery in demand that will have time lags from market to market and from sector to sector. The defence of global market shares gained over the years is, in fact, taking place in a particularly challenging competitive context, due to the different degree of strictiness of the measures adopted to contain the spread of the epidemic. What, therefore, is the evidence regarding the competitive positioning of the different countries in the period under scrutiny? 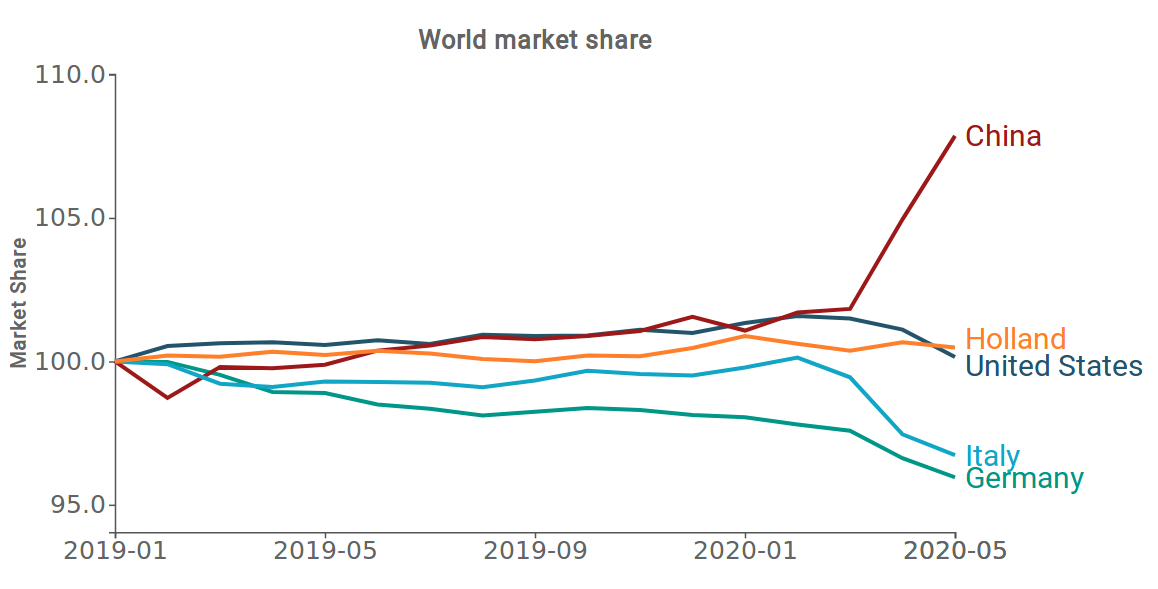 The cost of the necessary lockdown measures in terms of loss of market shares was particularly evident for some countries, including Italy and Germany; a negative trend can also be noted for the US market share. The Chinese economy, on the other hand, showed a significant increase in its shares. On the European front, Dutch market shares also held up.
Data for the coming months will show how much of this change will subsequently be recovered and how much will become structural.

Car registrations have been diminishing for the fifth consecutive month in the EU market: in November, they decreased by 20.5% compared to 2020 [ Read all ]