Belarusian Unrest and its Impact on the Currency

One of the news that shook the calm of August was about the street protests that are currently taking place in Belarus, denouncing electoral fraud in yet another victory of Alexander Lukashenko, in power since 1994. The elections of August 9, in which Lukashenko formally obtained 80% of the vote, would have consecrated the beginning of his sixth term in office; however, the continuation of his presidency hangs in the balance, in light of the protests that are taking place in the country due the election outcome, considered rigged. Protesters are therefore calling for new elections.

However, according to analysts, the outcome of the election would just represent the straw that broke the camel's back, in a context of already widespread discontent mainly related to:

Even in the absence of a lockdown, the Belarusian economy has in fact been penalized by the knock-on effects of the recession in other economies; for 2020, the IMF forecasts a GDP contraction of 6%.
The economic scenario for Belarus is also aggravated by the “adverse consequences from the gradual loss of oil price subsidies from Russia, the current oil-price shock and its negative impact on the price of Belarus’ exports of refined products” (source: IMF). The country's historical dependence on Moscow is therefore beginning to show its limits.

Effects on the currency

The dynamics of the Belarusian ruble confirms, in turn, the current crisis: as can be seen from the graph below, after a 2019 marked by relative stability against the dollar, 2020 has proved much more challenging for the currency. 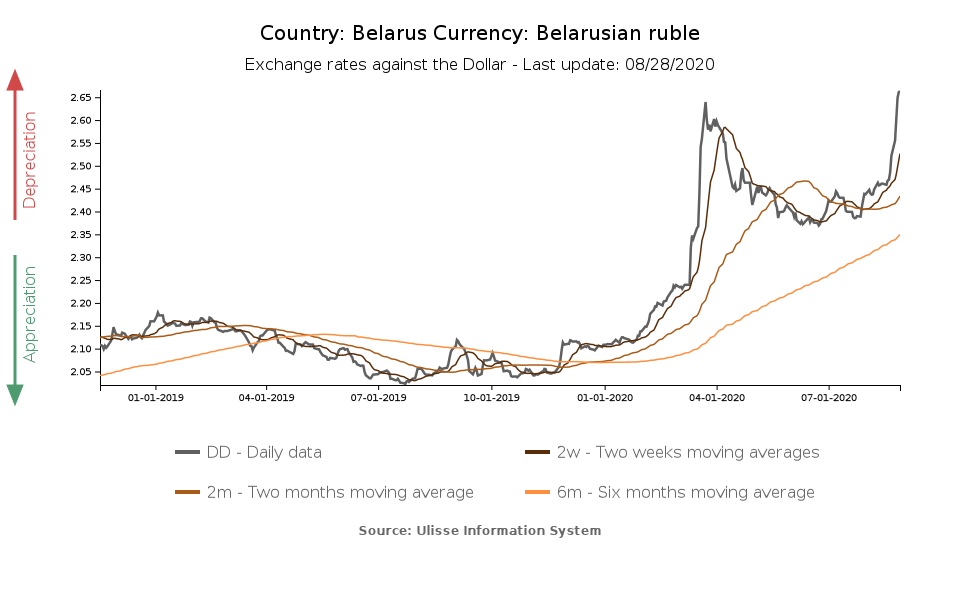 The ruble showed a sharp depreciation during the most severe phase of the Covid crisis, in line with the trend of other EM currencies and the generalized investors' flight from risk. After a phase of recovery - which lasted approximately until July - which did not let the ruble fully recover what was lost with the Covid shock, the outcome of the elections and the resulting popular reaction catalyzed a new weakening: before the outbreak of protests, the ruble traded with the dollar at 2.45; the exchange rate reached 2.66 BYN per USD today (with a depreciation of 8.6%).

In this context, the risk that the current president will take the path of violent repression is concrete. This risk is shifting to the ruble, also considering the scarcity of foreign exchange reserves held by the central bank, for the purposes of a possible support action: excluding gold, FX reserves amounted to $4.3 billion in July, below the IMF adequacy threshold. The reserves of the National Bank of the Republic of Belarus have also decreased by 35.8% since early 2020.
It is therefore feared a new social, economic and, consequently, currency crisis, an event that Belarus has already experienced in the recent past; the population is once again faced with the concrete possibility of an erosion of its purchasing power. In order to limit further pressure on the exchange rate, until mid-September the central bank has limited its offer of overnight loans.