The Sino-American conflict is broadening far beyond the commercial front, with relevant political and technological consequences

The growing concerns of the U.S. administration about the technological downturn of the Asian giant have broaded the Sino-American conflict far beyond the commercial front towards a technological competition. In the current geopolitical order technological supremacy is perhaps one of the most important arena in international competition.

Even in the current economic situation, the Chinese economy remains one of the most dynamic in the world, characterized by particularly ambitious investments in technologies. In 2015, the Chinese government announced the ten-year plan Made in China 2025 with the aim of accelerating the development of the country's high-tech industries. The goal of the national strategy is to make China a world leader in telecommunications, power equipment, robotics, high-end automation and new energy vehicles. The expenditure in Artificial Intelligence is the real heart of the Made in China 2025 plan: according to the survey A Brief Examination of Chinese Government Expenditures on Artificial Intelligence R&D, about 70% of the R&D expenditure of the National Natural Science Foundation of China, a governmental body aimed for promoting and financing research, is devoted to the development of artificial intelligence projects.
The commitment of the public administration in recent years has encouraged the rapid development of an integrated ecosystem of talented and innovative star-ups. Public and private investments in the sector have in fact made China the second largest capital market for artificial intelligence start-ups in the world, with a significant presence of investments also by several American big tech.

In the clash between the two technological giants, China's rapid rise in the telecommunications sector, particularly in 5G infrastructure, robotics and automation, is therefore a threat for the US administration.
The first actions of the U.S. have regard to the communications giant Huawei, which is becoming the most important technology provider for the management of 5G networks on the international scene. Between May and August 2019 the Trump administration decided to include the company Huawei, and several of its subsidiaries, in the "Entity List", the black list of companies considered dangerous for the U.S. national security. The inclusion on the black list has imposed a total ban on American companies from supplying goods or services without a specific government license.
In recent weeks this ban has also become more stringent: the latest restrictions prevent U.S. semiconductor manufacturers from selling their equipment to major global chip manufacturers (Taiwan, South Korea, Malaysia) if companies in these countries want to use them in products to sell to Huawei. Just a few days ago, the Trump administration also extended these restrictions to the Chinese company Semiconductor Manufacturing International Corporation, and its subsidiaries, China's most advanced computer chip manufacturer.
Over little a year, the Trump administration blocked shipments of semiconductors and chips to Huawei, a dozen of other Chinese companies, and moved to ban Chinese social media services WeChat and TikTok1.

Hit the semiconductor sector means taking measures to severely restrict the free trade of one of the technologies behind all the most advanced modern inventions: from smartphones to telecommunications hardware (5G), from computers to cars, from data centers to artificial intelligence systems.
The semiconductor value chain is also highly integrated into the global landscape, in which the USA itself plays a leading role. The graph below shows on the left the main world exporters of semiconductors, on the right the trade balance for the sector for each country. 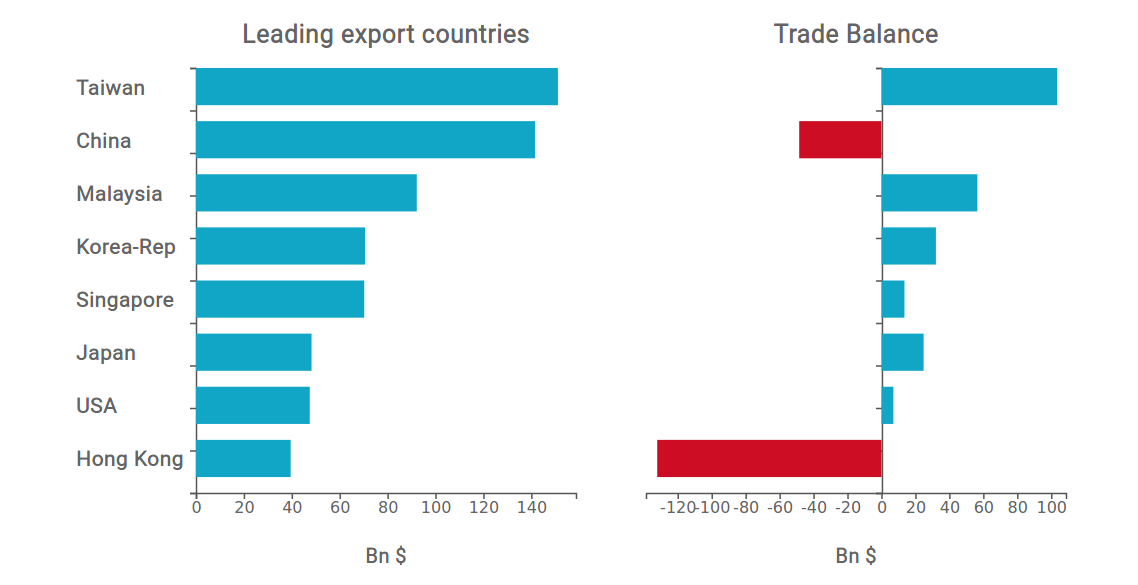 It is clear that, despite the numerous efforts of the Chinese industry to become more autonomous from foreign semiconductor purchases, unlike the United States, the country is still a net importer of this technology, precisely because of its role in the global value chain. Typically, in fact, China is the home of several major assembly centers in finished semiconductor products, which arrive in the country after going through the first stages of the manufacturing process2.

The main Chinese semiconductor suppliers are countries such as Taiwan and Malaysia, which, as mentioned above, are the main net exporters of semiconductors and chips on the international scene. In particular, in the last twenty years, Taiwan has seen its centrality in Chinese supply chains grow significantly, reaching the 30% of the market, replacing Japan, the country that at the beginning of the century was the main supplier. 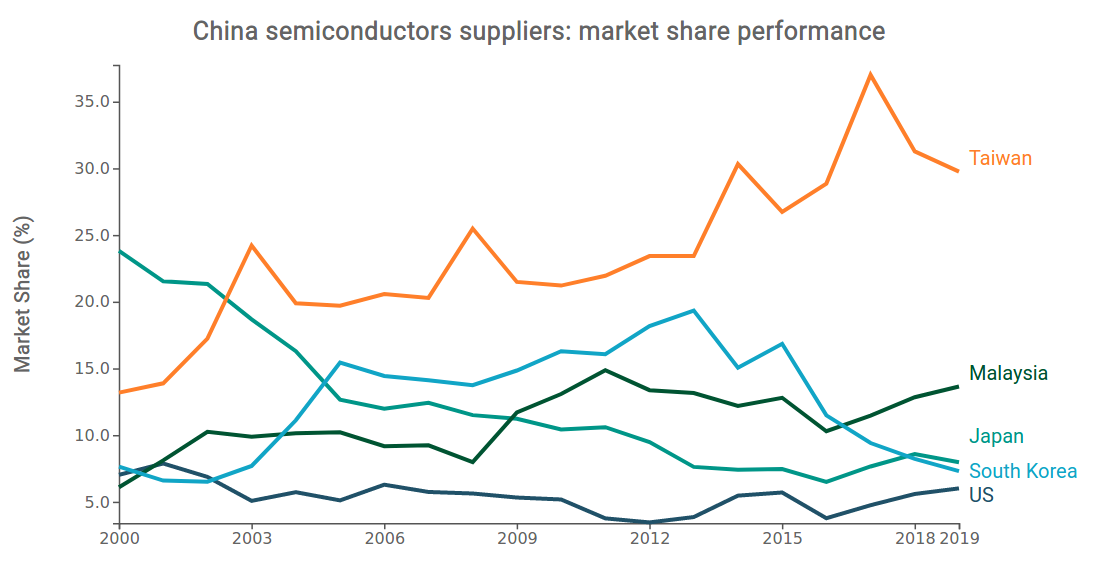 Taiwan is in fact the home of the Taiwanese Semiconductor Manufacturing Company, the world's largest semiconductor manufacturer for third parties, serving both American and Chinese enterprises. The Trump administration's action is therefore aimed at limiting Huawei's supply of US semiconductor technology, software and equipment for its products. The obvious aim of the Trump administration is therefore, on one hand, downsizing the integration of the value chains existing between the two countries, already started with the introduction of tariffs, on the other hand, threatening the Chinese technological rise by reducing the list of suppliers, both American and foreign, of the Chinese company Huawei.

Despite significant efforts in the technological rise, the China is not completely independent from American and foreign inputs. For this reason the initiative is central and binds several foreign suppliers of Huawei to a control by the U.S. government. Because of the U.S. measures, China is ready to adopt a series of countermeasures, including the inclusion of several U.S. companies such as Apple in a "list of unreliable entities" and the suspension of the purchase of Boeing aircraft.

In the run-up to the election round and following the WTO ruling condemning the US tariff actions, the dialectic between the two giants seems to have moved more and more towards a geopolitical confrontation. Breaking the interdependence between the two economies means to broad the ground of trade conflict towards a wider horizon with significant technological and political consequences.

1 The U.S. ban on the TikTok app is, however, on standby due to the ruling of the Federal Court of Columbia, which decided to temporarily suspend the ban, accepting the requests submitted by the Chinese company ByteDance, which controls the platform.

2 The semiconductor manufacturing process can be divided into three macro phases: design, manufacturing and testing&packaging. The first one typically takes place in the US, the subsequent ones in countries with lower labor costs.