The Canadian dollar is confirmed as a "commodity currency", but also a "speculative instrument "

With $92 billion in 2020, Canada is the world's sixth largest exporter of natural raw materials. If industrial raw materials are also included, Canadian exports exceed $150 billion and account for more than one-third of the country's total foreign exchange earnings.
The large dependence of foreign earnings on commodity sales subjects Canada to pressures towards a depreciation of its currency when commodity prices are falling; conversely, when commodity prices are rising, it creates the conditions for a progressive appreciation of the Canadian dollar.

The last week closed with a change in agricultural commodity prices of more than 50% on an annual basis, with the price of copper close to the absolute maximum of February 2011-doubling its price in the last 12 months- and with the price of Brent oil that has been above $65 a barrel for more than a month, up more than 150% compared to April 2020.
Given this dynamic in commodity prices, the Canadian dollar could not fail to experience a strong appreciation phase: at the end of this week, the Canadian currency rate fell below the level of 1.23 Canadian dollars per US dollar, an appreciation of 1.8% in the last seven days and 12% in the last year. 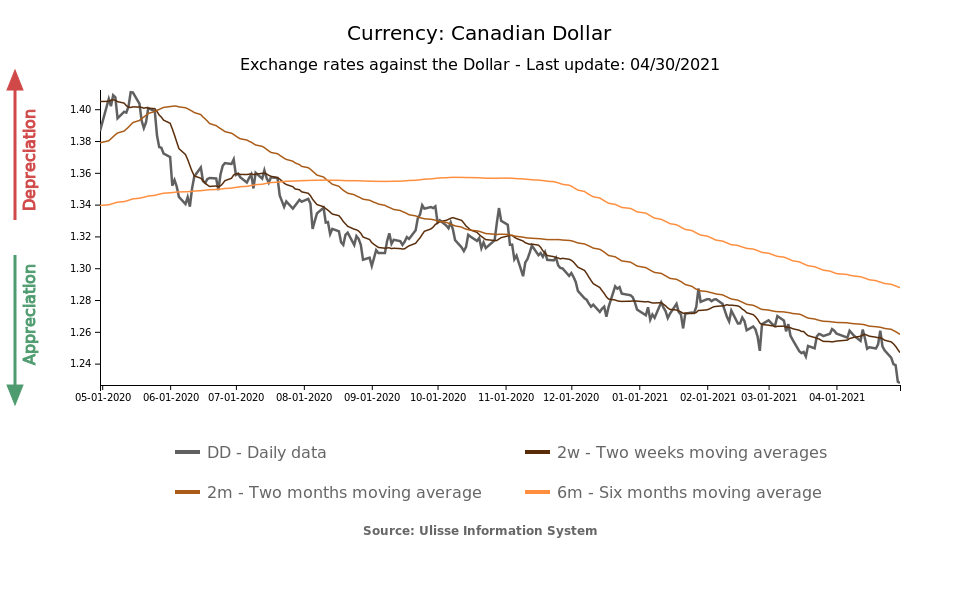 However, not all financial operators agree with the interpretation of the "commodity currency".
According to some analysts, in fact, the strength of the Canadian dollar must be sought in the expectations of a possible short-term change in the Bank of Canada's (BoC) monetary policy, which is about to reduce the purchase of securities issued by the Canadian treasury. The BoC already holds more than 35% of the outstanding securities and further increases could distort the proper functioning of the financial markets. Any reduction in BoC purchases would result in an increase in interest rates, supporting the Canadian dollar. According to this interpretation, financial operators are therefore betting on a future appreciation of the currency, creating the conditions for the expected appreciation to be brought forward to today.

This interpretation seems to be confirmed by what happened in the last 10 days.
The appreciation of the Canadian dollar has, in fact, accelerated after the BoC announced on April 21: "Effective the week of April 26, weekly net purchases of Government of Canada bonds will be adjusted to a target of $3 billion", reducing them compared to the target of $4 billion in recent months.

It is therefore likely that the Canadian dollar exchange rate is influenced by both factors. As a "commodity currency", in the last year it has benefited from the strong increase in the prices of raw materials; as a "speculative currency", in the last few days it has also reflected the expectations of the financial markets, induced by the reduction of the target of weekly purchases of securities by the BoC from 4 to 3 billion.