The availability of ExportPlanning preestimates for the third quarter of 2022 -consulted through the datamart World Conjuncture- provides us with an overview of the cyclical situation of world trade in goods, in a historical period dominated by great uncertainty at the international level, due to the aftermath of the global Covid outbreak, the Russian-Ukrainian war, and the sharp rise in inflation and commodity prices.

Reading the economic data is complex in light of the profound changes in recent months. In fact, the signals arising from the update of international trade data to Q3 are significantly different depending on the measure analyzed and the time reference.
The following compares the monthly trend rates of change (YoY) in both quantity and value (in U.S. dollars) of world trade as measured by both the export and import sides of declarations. 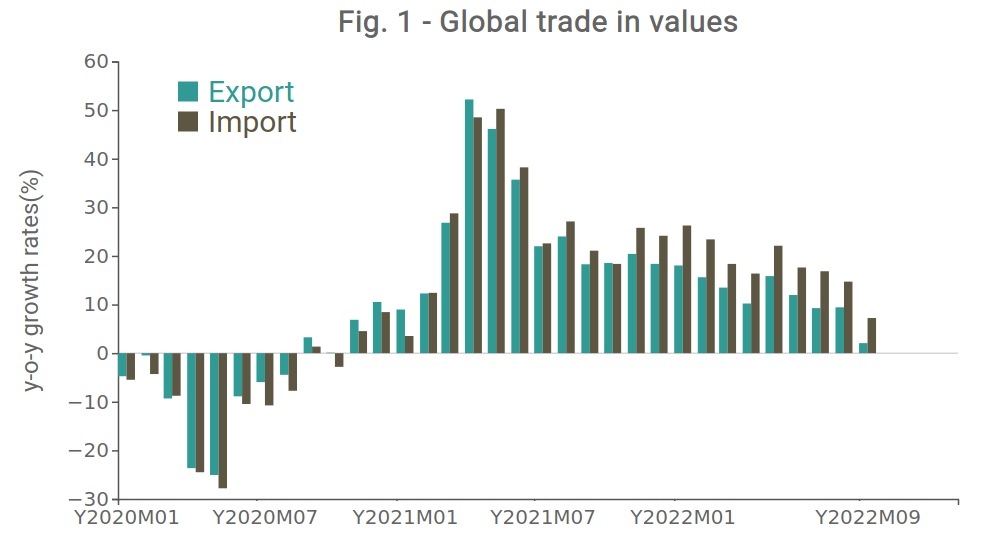 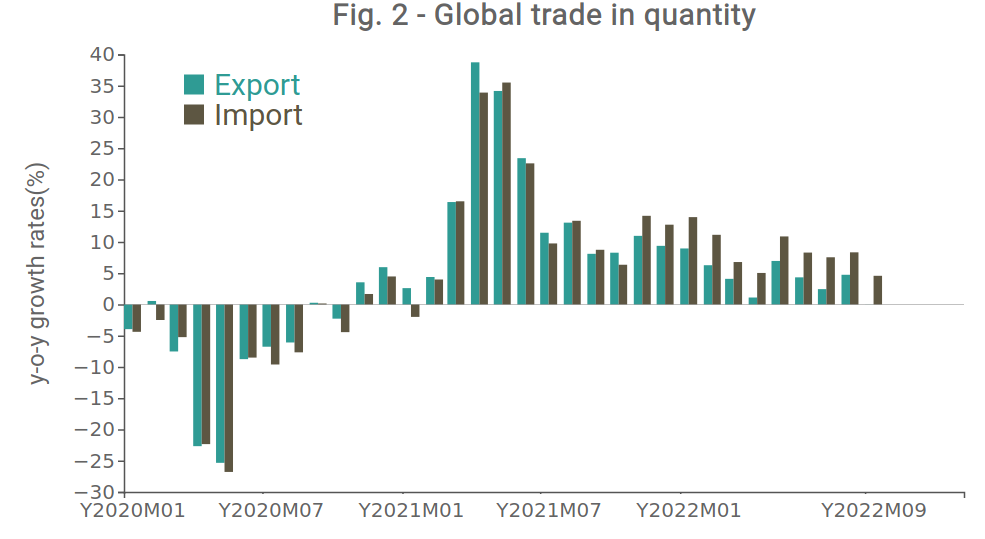 First of all, we can see that monthly trend changes have remained in positive territory in recent months as well, despite the severe tensions at the economic level. They allow us to highlight the speed that international trade had assumed between the end of 2021 and the beginning of this year, but not to measure the change in speed that has occurred in more recent months. In fact, international trade during the first half of 2022 was particularly buoyant, and the effects of this strong growth influence the trend result for the third quarter as well. Overall, exports in 2022-Q3 show +6.8 percent growth in value compared to the third quarter of 2021 (+2.4 percent in quantity), while imports show +12.8 percent in value (+7.1 percent in quantity).

These data provide us with an opportunity to point out the wide difference that exists between values at constant and current prices. It is particularly important in this period when inflation has returned to high levels. This is borne out by the graphs, in which it is clearly visible that the changes in values at current prices are much higher than those at constant prices, so much so that for some months this discrepancy exceeded 7 percentage points.

For an analysis of the current slowdown, a reading of the QoQ data is most useful. The table below shows the cyclical rates of change for the first II and III quarters of 2022.

It is evident from the QoQ rates that the increase in Q2 2022 was substantial, while from Q3 onward the change enters negative territory, with a decline in constant prices close to -2% for global exports. The decline is greater for global trade at current prices, and in Q3 the change in dollar prices also entered negative territory.
The reduction in prices can be attributed partly to the decline seen in commodity prices, and partly to the appreciation of the dollar in recent months, which has reached parity with the euro. 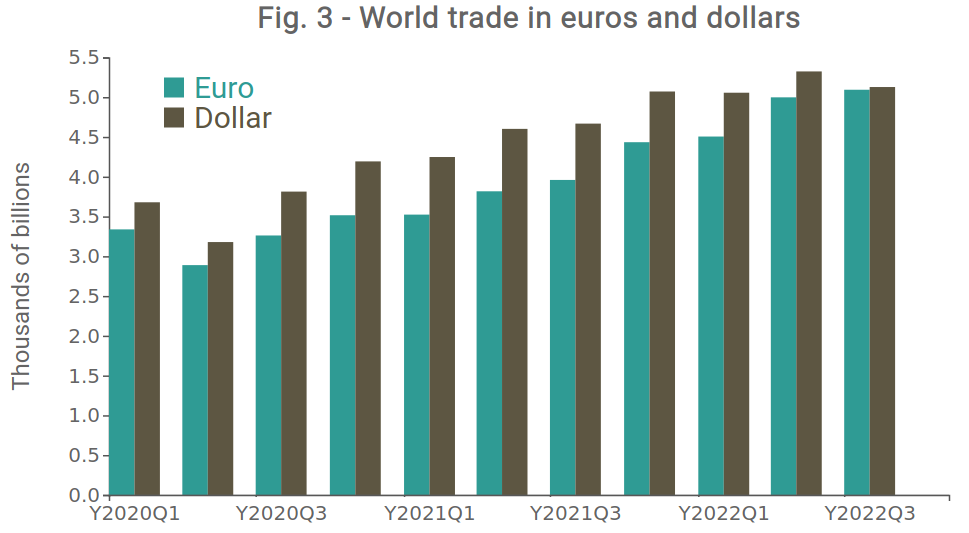 We can see how the difference between the euro and the dollar over the past 2 years has been slowly getting thinner and thinner, until the two values almost perfectly matched in the third quarter of 2022, in which the dollar appreciated by 4% against the euro. This is another factor that makes the extraction of relevant information from the analysis of economic data more complex.

This analysis signals that it is very likely that 2022 will experience significant growth in international trade at current and constant prices at the end of the year. This, however, is the result of two very different periods: a first half of the year with strong growth, followed by a third quarter in which trade is down.