New Race for the Russian Ruble?

After the weakening phase experienced for most of 2020, the Russian ruble seems to have found new vigor, preparing to become, according to several international observers, the best performing currency in the emerging markets cluster in the second half of 2021.
As the chart shows, despite the fact that the currency has not yet reached the January 2020 values of RUB 60 per USD, since the third quarter of 2021 the ruble has been experiencing a new phase of appreciation that allowed the exchange rate, on Tuesday, October 26, to cross the 70 ruble per dollar threshold for the first time in 16 months. In recent days, however, there has been a new trend reversal, which caused the currency to lose 0.4% of its value. 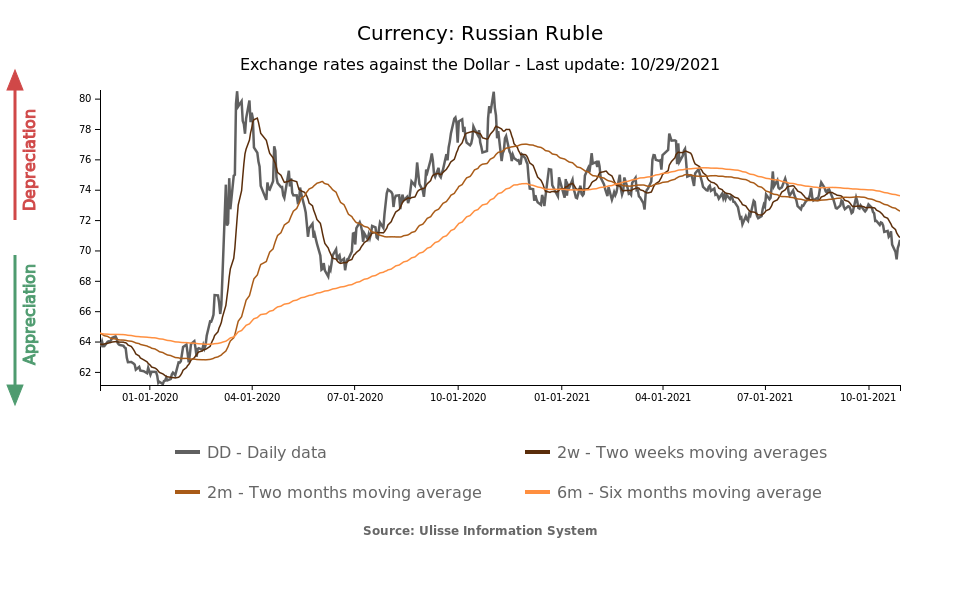 We can find several factors behind the bull trend of the ruble.

Monetary policy. On Friday, October 22, the Bank of Russia raised its policy rate again by 75 basis points, reaching 7.5%. In addition to being one of the first central banks among emerging countries to implement a monetary policy restriction, the line adopted by the Bank of Russia is also becoming one of the most aggressive. This is, in fact, the sixth intervention on rates in 2021; the bank has warned that, by the end of the year, there could be further increases in order to prevent a sustained rise in inflation.

Balance of Payments. The Bank of Russia's balance of payments data show a particularly positive third quarter 2021 that helped the ruble outperform its peer currencies. 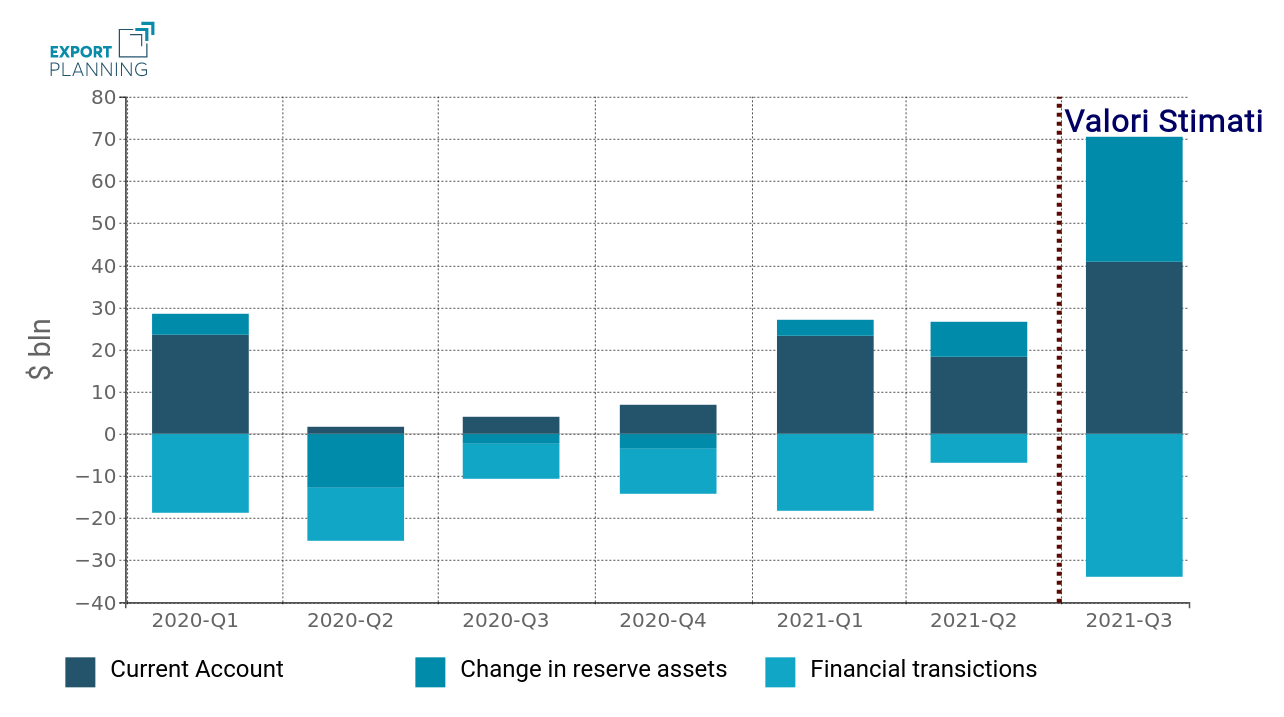 In the last quarter, the current account balance posted its largest quarterly surplus ever, exceeding $40 billion. On the one hand, there was an acceleration in exports of non-fuel products, such as metals and agricultural products, which enjoyed favorable demand in a higher price environment. At the same time, import flows were restrained after peaking in the second quarter of 2021.
Overall, the current account surplus appears as the main driving force behind the positive performance of the exchange rate against the dollar; given seasonal increases in gas export volumes, further growth in Russian exports is expected in Q4-2021 (Source: ING).

Despite the encouraging forecasts, it should be noted that some elements of uncertainty remain - elements which could interfere with the ruble's appreciation dynamics.

Capital outflow. From the front of private sector financial transactions, still worrying data emerge: the capital outflow recorded during 2020 is going on and jumped to almost $34 billion over the last quarter (see chart above).

Increase in Covid cases. Since October, Russia has been experiencing a new growth in Sars-CoV-2 infections, registering a record 35 thousand new cases daily during the past week. In this context, the increase of cases could deteriorate investors' sentiment by negatively impacting the exchange rate dynamics.

To sum up, for the medium term the rapid outflow of local capital and the global strengthening of the dollar could limit the appreciation of the ruble. Conversely, the increase in Russia's current account balance, driven by demand for fuel products (such as natural gas and oil), could be the main factor behind the currency's appreciation in the medium-to-long term.