US and EU: the new Tone of the Transatlantic Partnership

With the announcement of the suspension of tariffs on steel and aluminium, the two sides of the Atlantic have begun dialogue on a global agreement for sustainable production

On the sidelines of the G20, the European Union and the United States jointly announced that they had reached an agreement to suspend tariffs on steel and aluminium, which is part of the broader ambition to achieve a new global agreement to produce steel and aluminium in a sustainable way.
The two sides of the Atlantic have pledged to use trade policy to address the threats of climate change and global market distortions, with the aim of reducing trade in carbon-intensive steel and aluminium products. The global agreement will be open to any other country interested in sharing the same commitment.

Demonstrating renewed trust, the US has therefore agreed to suspend the additional duties - of 25% on steel and 10% on aluminium - currently in place on European products, which were imposed in June 2018 by the former Trump administration. Specifically, from 1 January 2022, the new regime will see the introduction of an annual tariff quota system on steel and aluminium imports, which is calibrated on the basis of historical bilateral trade volumes.

Steel and aluminium: EU exports to the US market

For an overall evaluation of the former Trump administration's tariff action, trade data available in the ExpotPlanning platform allow to document the sharp fall of European steel exports since the second half of 2018; aluminium exports, on the other hand, have followed a very different dynamic. In order to highlight this trend, the following graphs show the quantities of steel and aluminium exported by the European Union over the last few quarters.

Steel: EU exports to US
(thousands of tons) 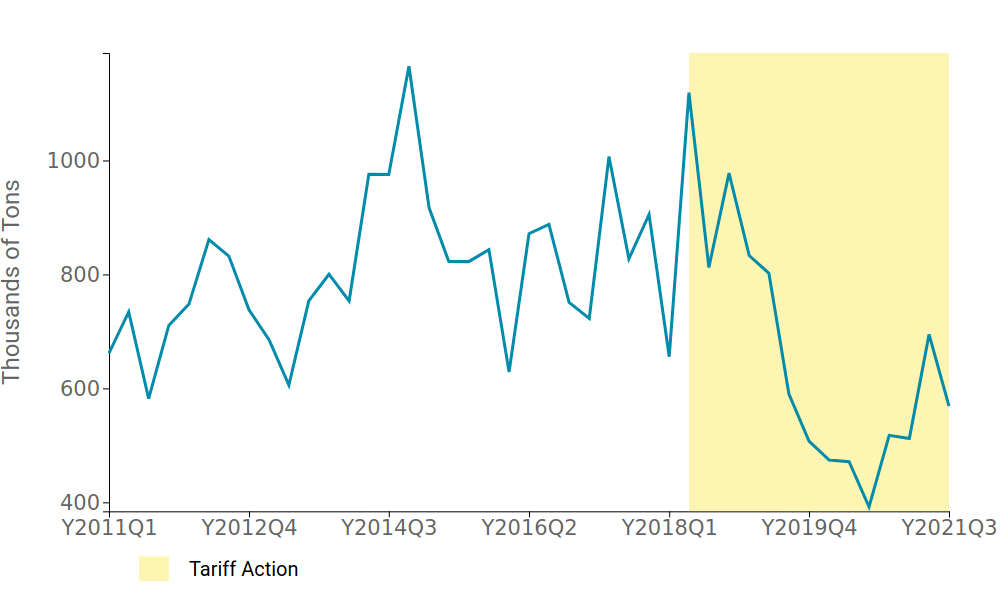 Aluminium: EU exports to US
(thousands of tons) 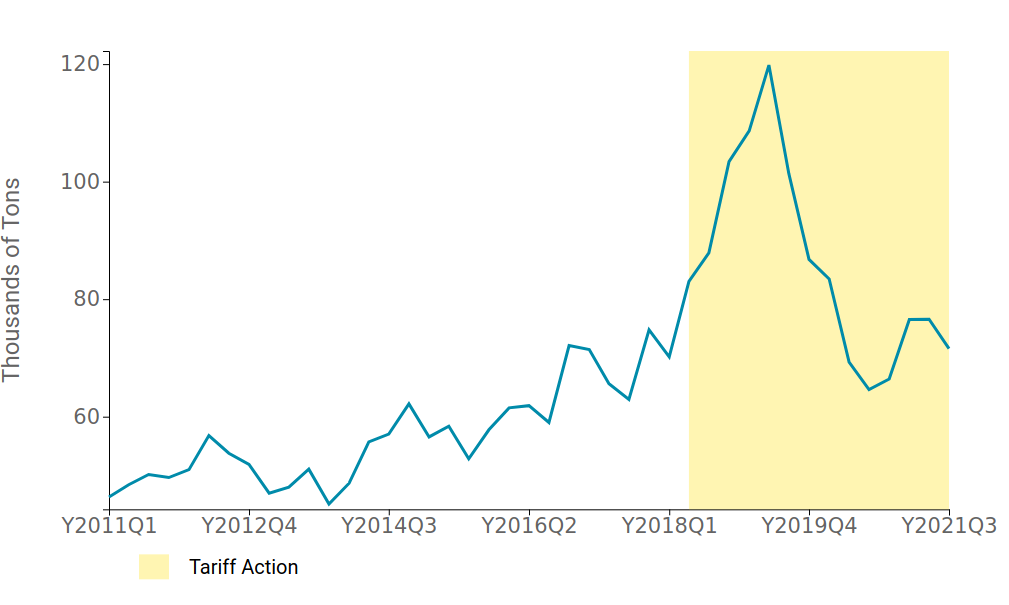 As a result of the introduction of the tariffs, the quantity of steel exported fell dramatically, while in the case of aluminium, the contraction started only in the early months of the pandemic year. The result testifies to the fact that the US demand for EU made aluminium, in the first 18 months, proved to be relatively rigid to the additional 10% cost increase resulting from the tariffs, as documented by the European Commission in US importers and consumers are affected by US tariffs on aluminium paper.

This development has influenced the choice of the historical reference period in the determination of the quota system that will come into force from 2022: according to the statement published by the US administration, quotas have been set taking into account the levels of EU exports between 2015 and 2017 in the case of steel, and between 2018 and 2019 in the case of aluminium.

Steel: EU exports to US
(thousands of tons, yearly)

Aluminium: EU exports to US
(thousands of tons, yearly)

In particular, from 2022 onwards, European exporters will be able to sell up to 3.3 million tonnes of duty-free steel and around 380,000 tonnes of aluminium to the US.

In conclusion, the agreement undoubtedly stems from the desire to restore the level of trade, while placing some restrictions on European exports to the US market. One of the most significant factors in the agreement reached is the overcoming of a logic purely centred on duties, by including the environmental issue and the limitation of unfair competition practices, typical aspects of the new generation agreements promoted by the European Union. It is no coincidence that in order to benefit from duty-free treatment, all products will have to be entirely manufactured in the European Union, excluding those goods whose final stage of manufacture takes place in Europe, but use mainly steel from China, Russia and South Korea, thus ensuring that products from non-market economies do not benefit from the arrangement.

The agreement marks a further step in the re-launch of trade relations between the two sides of the Atlantic: in June, the US and the EU had already announced the end of the tariff dispute in the Airbus-Boeing dispute, in late September they concluded a new trade and technology partnership, and in early October they reached an agreement on global minimum taxes. Transatlantic cooperation thus seems to be stronger than ever to meet the challenge of China's rise and the WTO reform.