With the availability of the new SARS-CoV-2 vaccine, China has rapidly become the second largest supplier to low-income economies

The recovery of the world economy in 2021 surprised on the upside, thanks to the positive outcome of vaccination campaigns in many advanced countries, which accelerated the reopening of production activities and significantly reduced restrictive measures. As the International Monetary Fund (IMF) has repeatedly stressed in its latest macroeconomic outlook publications, access to and availability of SARS-coV-2 vaccines are the pillars on which the recovery of the international economy's growth path is based.
Yet, while most major advanced economies have experienced significant progress in vaccination campaigns, most emerging and developing economies are experiencing very slow progress due to current access conditions and supply constraints.
The map below clearly highlights the significant divergence between developed and low-income countries in the progress of vaccination campaigns: while advanced economies report vaccination rates close to 60%, in low-income countries the unvaccinated still represent the vast majority of the population.

In this context, a very useful piece of information to analyse is therefore the figure for international trade in vaccines.
According to the World Health Organization(WHO), all vaccines for human medicine are included in a single customs code. The graph below shows the dynamics recorded by world trade in this product over the past few months: global trade in vaccines has gone from being worth around $30 billion (in the 2019-2020 biennium) to doubling in the first three months of 2021, reflecting the new availability and advance of the SARS-coV-2 vaccine campaign on the international stage.

This significant growth in the sector has had a relative impact on the international competitive balance: until 2019, the world trade in vaccines for human medicine was entirely dominated by a few countries, primarily the major European economies (Belgium, France, the Netherlands, Italy and Ireland), flanked by the United States and, at a relative distance, India.
From 2021, with the availability of the new SARS-CoV-2 vaccine and the gradual opening up of international trade in the product, there was also a relative shift in the long-term competitive balance. The top exporters are dominated by the three main production sites of the most popular anti-Covid vaccines, Belgium and Germany (where the share of anti-Covid vaccines exceeds 80% of total vaccine exports) and the United States; however, together with the historically exporting countries, for the first time, the top 10 global players ranking includes China in 2021 (see chart below).

The result is entirely attributable to the role that the Dragon country is currently playing in the supply of vaccines to low income countries. Indeed, while China's exports of the product are zero to developed countries, in the case of developing economies China has rapidly become their second largest commercial player for the product. 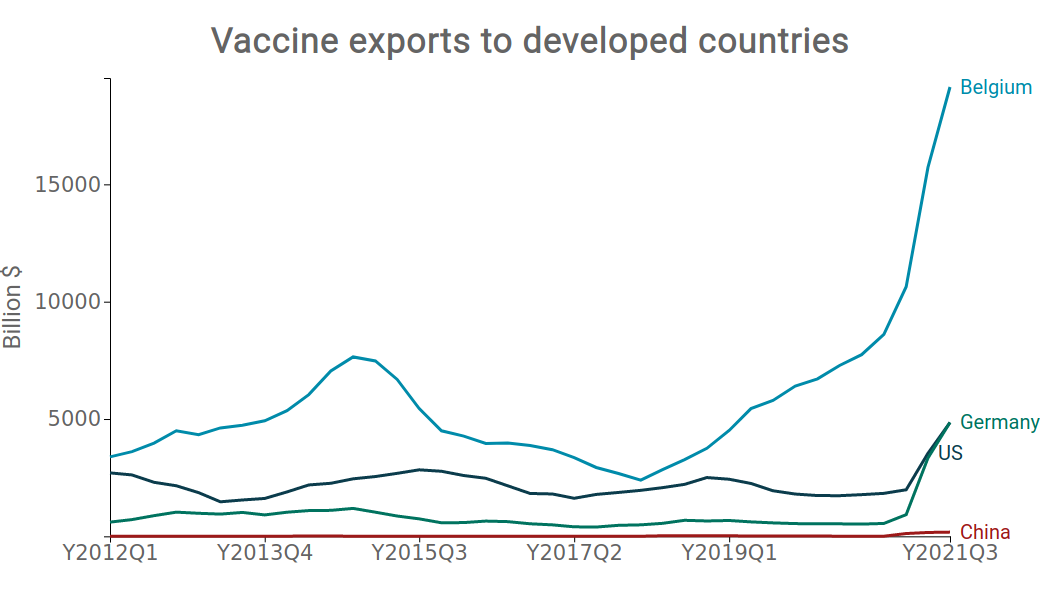 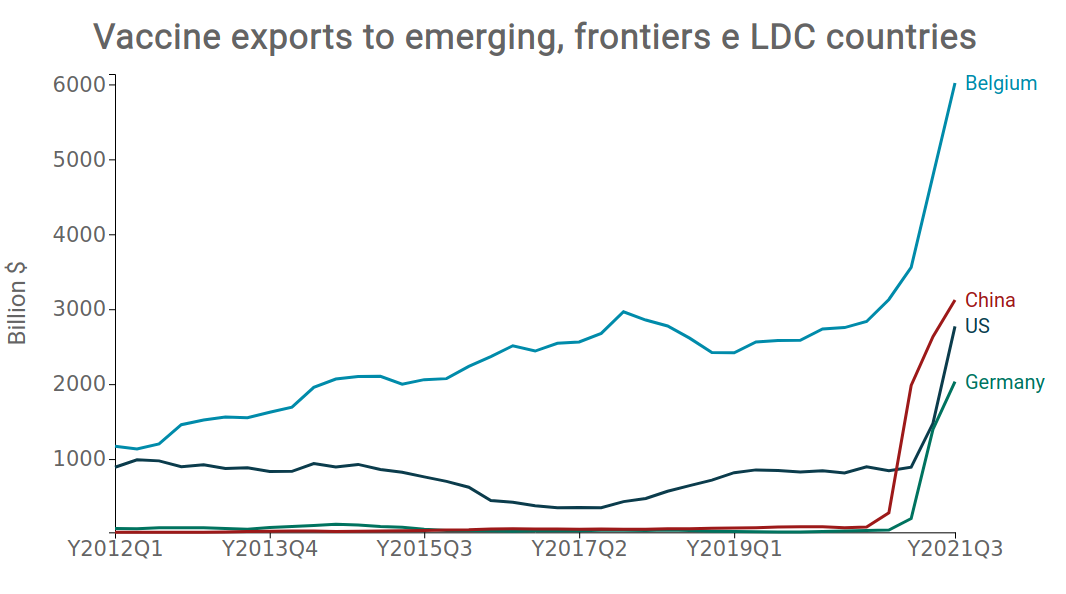 The main importers of Chinese vaccines are both geographically close countries, belonging to the Asian area, as well as more distant regions: in the first nine months of 2021, Chinese vaccines are in fact most imported from Turkey, Indonesia, Thailand, Malaysia, Brazil, Mexico and Chile, as well as from several Eastern European economies, such as Hungary, Slovenia and Serbia. For most of these economies, China's share is close to that of major European and American exporters, and in some cases, such as Indonesia, Thailand, Chile and Hungary, it exceeds all other Western exporters.

As already happened in the case of goods and devices for the Covid-19 emergency (for more details see Covid-19 Goods and Devices: International Trade figures), also for vaccines the increasing importance of the Chinese partner in a strategic sector in the management of the pandemic emergency is confirmed. Particularly significant is the fact that it is above all those nations with the greatest difficulty in obtaining vaccine doses from Europe and the United States that are most dependent on them, making the Dragon country an even more important supplier for those economies that need to strengthen the progress of the national vaccination campaign. As with other sectors, the post-Covid world will therefore see the Chinese partner as a new global player.