The availability of ExportPlanning preestimates for the first half of 2022 -accessible through the World Conjuncture datamart- makes it possible to document the economic situation of world goods trade, in an international context strongly marked by the uncertainty of the Russian-Ukrainian conflict, significant inflationary pressures and increases in commodity prices, as well as persistent inefficiencies along international value chains, especially following the effects of Chinese lockdowns affecting major ports in the Dragon country.

After showing a particularly pronounced recovery during 2021, which occurred mainly in the first part of the year, world trade in goods gave way to a gradual slowdown.
The following graph shows the monthly series of world trade in manufactured goods in quantity, comparing data collected and systematized by ExportPlanning with data from the Central Planning Bureau, an institute that collects and processes information on international trade in goods.

Both series make it possible to highlight how world trade in goods, although now at levels largely above -at constant prices- pre-pandemic levels, since the fall of 2021 has ushered in a phase of relative stabilization, only weakly interrupted in December.
This dynamic has resulted in a significant slowdown in the pace of expansion of international trade in manufactured goods in quantity, as shown by the monthly series of trend growth rates (Fig.2).

The slowdown in world trade has been steadily intensifying: after posting 9.5 percent growth in quantity in the first quarter of the new year, world trade posted a 1.7 percent increase in constant prices in the April-June period. Particularly significant is the deceleration visible over the past four months, mirroring the negative effects of the conflict and closures imposed by the Chinese government.
Overall, in the first half of the new year, world trade increased in quantity by 5.5 percent compared with the corresponding period of last year.

Supporting the evidence of significant slowdown in the pace of growth are also signs showed from the global manufacturing Purchasing Managers Index, a "real-time" indicator of economic performance, which summarizes the outlook regarding industrial activity levels, based on companies' purchasing declarations. The indicator shows signs of slowing for all major economies, with China showing values just below the expansion threshold of 50 in the months of the tightest restraint measures.

Particularly significant is the New Export Orders component of the Global Manufacturing PMI, a leading indicator of the dynamics of global trade in manufactured goods: since the beginning of the year it has been hovering at levels below 50, signaling that new orders from abroad received by companies around the world have entered a deceleration phase. In particular, the indicator in May and June marked the values of 47.9 and 49.5, respectively. Translated with www.DeepL.com/Translator (free version)

Fig.4 - Global PMI and New Export Orders
(the line in gray signals the expansion threshold of 50) 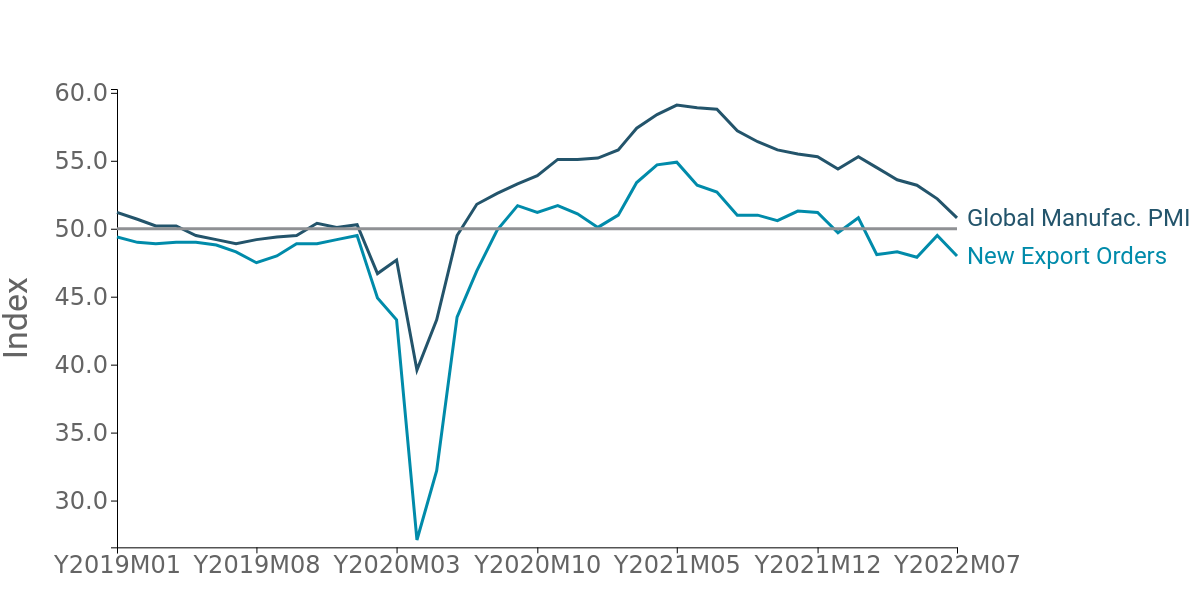 It is also important to point out how, when measured in value, the slowdown in world trade in goods appears less pronounced (Fig.4); in fact, trade marks a 25 percent increase in euros in the first half of the new year compared to the same period in 2021, compared to a 19 percent increase in average unit values.
The result reflects, on one hand, the price increases recorded over the past six months and, on the other hand, the significant devaluation recorded by the euro against the dollar, with the euro/dollar quotations being almost equal in recent weeks. In fact, reading the economic data in quantity allows us to strip out the nominal effects, which are linked to price changes and the evolution of exchange rates.

Fig.4 - World trade in values
(trend rates of change in euros and dollars) 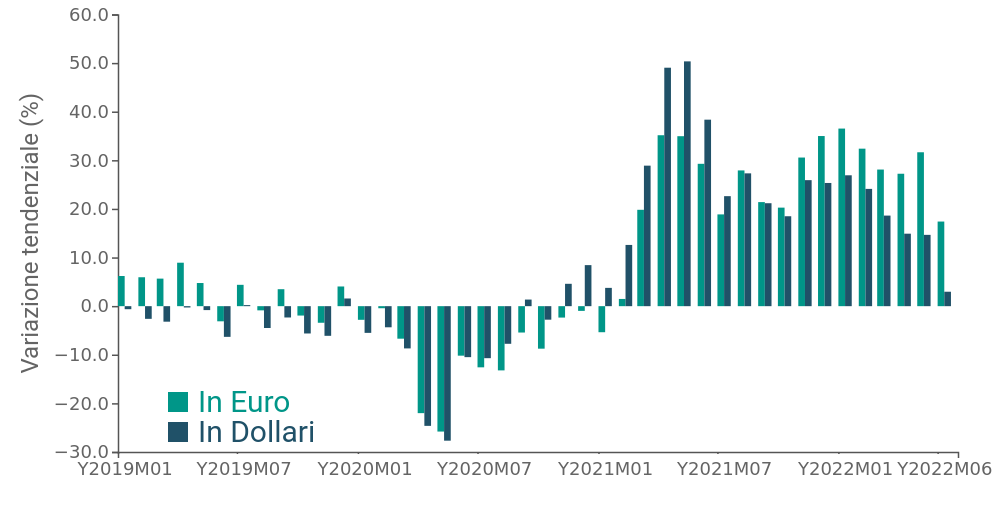 Within the framework just described, and given the significant slowdown in economic activity, it is therefore estimated that in 2022 world trade in goods will slow its pace of expansion, marking a smaller increase of 4.1% in volume, according to the most recent outlook of the International Monetary Fund. Although this forecast appears to be downward from the April publication, mainly related to Chinese closures and the appreciation of the dollar, the dynamics of world trade will continue to remain in positive territory.